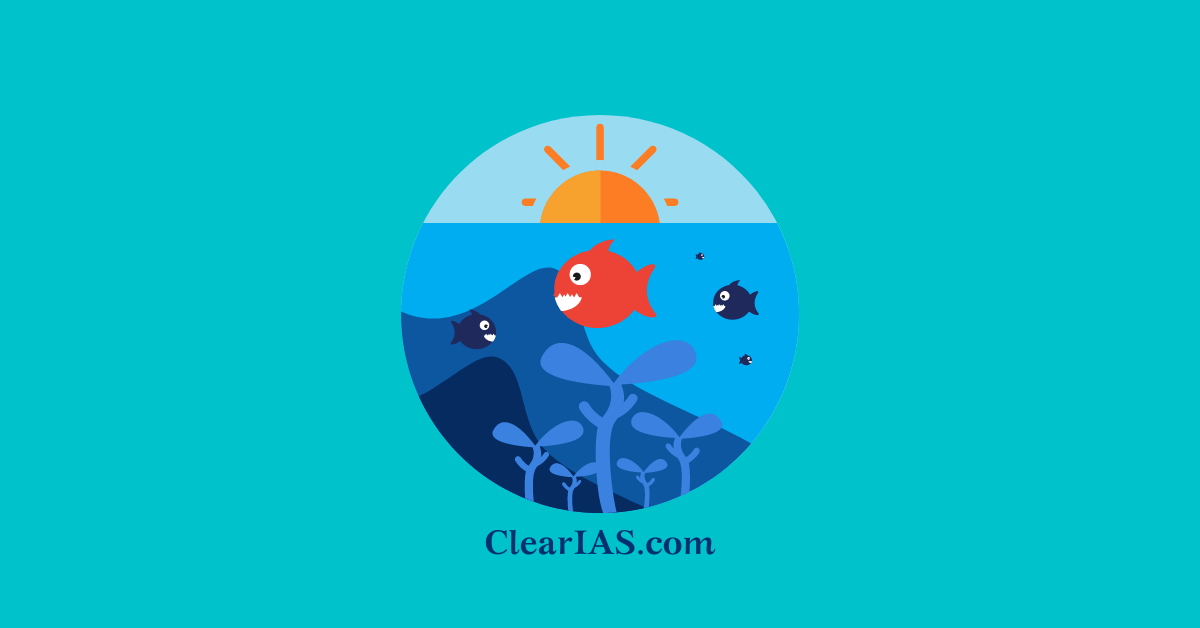 As you might know, oceans cover three-quarters of the Earth’s surface.

Oceans also represent 99% of the living area on the planet.

However, the current economic trends have been rapidly degrading ocean resources.

Blue Economy deals with the sustainable use of ocean resources.

What is Blue Economy?

Blue Economy is the sustainable use of ocean resources and ocean development strategies for economic growth, improved livelihoods and jobs, and ocean ecosystem health.

This concept predominantly aims for the development of human wellbeing and social equity, whilst reducing environmental risks and ecological scarcities of the ocean.

The economic philosophy of the Blue Economy was first introduced in 1994 by Professor Gunter Pauli at the United Nations University (UNU).

The concept became significant since the Third Earth Summit Conference – Rio+20 in 2012.

This philosophy underpins the objective behind the Commonwealth Blue Charter, highlighting the close linkage between the ocean, climate change, and the well-being of the people.

World Bank: The blue economy is the sustainable use of ocean resources for economic growth, improved livelihoods, and jobs while preserving the health of the ocean ecosystem.

European Commission: Blue Economy deals with all economic activities related to oceans, seas and coasts. It covers a wide range of interlinked established and emerging sectors.

The Commonwealth of Nations: Blue Economy is an emerging concept that encourages better stewardship of our ocean or ‘blue’ resources.

Conservation International: Blue economy includes economic benefits that may not be marketed, such as carbon storage, coastal protection, cultural values and biodiversity.

The Center for the Blue Economy: The blue economy is now a widely used term around the world with three related but distinct meanings- the overall contribution of the oceans to economies, the need to address the environmental and ecological sustainability of the oceans, and the ocean economy as a growth opportunity for both developed and developing countries.

United Nations: Blue Economy is an economy that comprises a range of economic sectors and related policies that together determine whether the use of ocean resources is sustainable. An important challenge of the blue economy is to understand and better manage the many aspects of oceanic sustainability, ranging from sustainable fisheries to ecosystem health to preventing pollution. Secondly, the blue economy challenges us to realize that the sustainable management of ocean resources will require collaboration across borders and sectors through a variety of partnerships, and on a scale that has not been previously achieved. This is a tall order, particularly for Small Island Developing States (SIDS) and Least Developed Countries (LDCs) who face significant limitations. The UN notes that the Blue Economy will aid in achieving the UN Sustainable Development Goals, of which one goal, 14, is “life below water”.

World Wildlife Fund: For some, a blue economy means the use of the sea and its resources for sustainable economic development. For others, it simply refers to any economic activity in the maritime sector, whether sustainable or not.”

The Blue Economy encompasses activities that include:

More than 80 % of traded goods are transported by Sea and the rate of seaborne trade is expected to double by 2030 and quadruple by 2050.

80% of litter in oceans is due to land-based sources. The Government of India’s Vision of New India by 2030 highlighted the Blue Economy as one of the ten core dimensions of growth.

Blue Economy was mentioned as the sixth dimension of Vision of New India 2030 stressing the need to improve the lives of the coastal communities and accelerate their development.

The objective of India’s Blue Economic policy framework should be to enhance the country’s GDP by promoting sustainable and inclusive economic growth whilst aligning with national security goals and the international development agenda.

Potential of Blue Economy with respect to India

The coastal economy also sustains more than 40 lakh fishermen and other significant populations of coastal communities.

According to pre-pandemic OECD estimates the global Blue Economy was expected to grow double the rate of the rest of the world economy.

In the Post COVID-19 global scenario, India witnesses significant growth in the marine sector by efficient and sustainable utilization of ocean resources.

The blue economy along with the market opportunities paves way for the conservation and development of intangible ‘blue’ resources such as carbon sequestration and coastal resilience and decision-making to help vulnerable nations to mitigate the devastating effects of climate change.

Important facts connected with the potential of Oceans

During Rio+20 Summit in June 2012, Pacific small island developing states stated that, for them, “a green economy was in fact a blue economy”.