ClearIAS » Geography Notes » Hot Springs: Everything you need to know 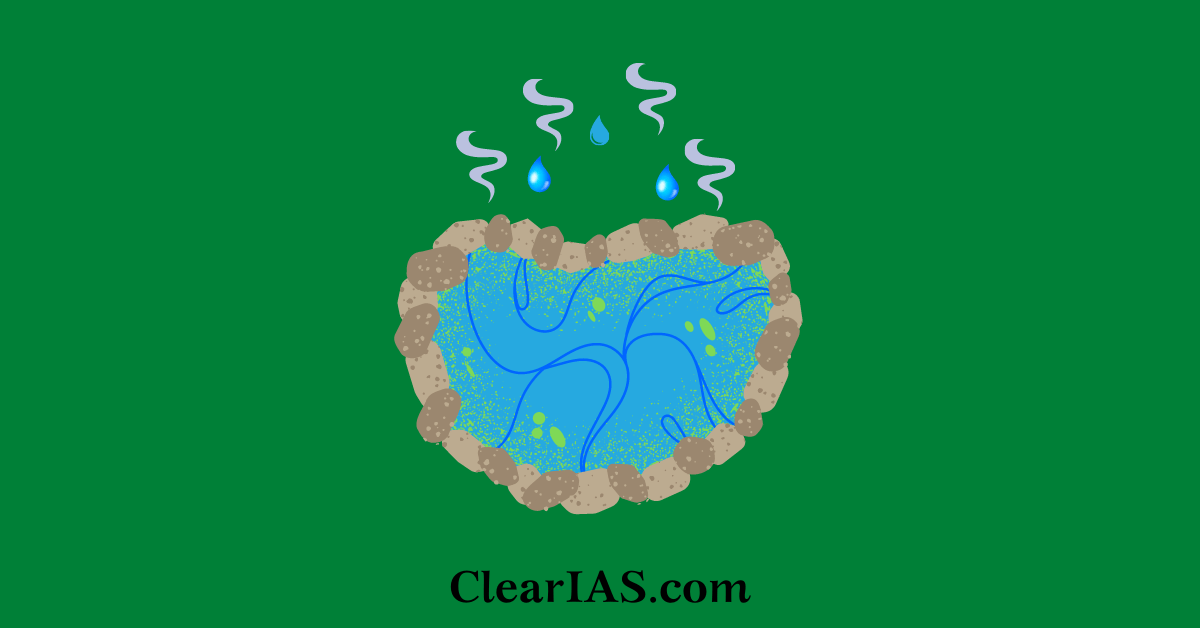 Hot springs are also referred to as thermal springs. The word thermal means relating to heat.

When geothermally heated groundwater erupts from the Earth’s crust, it creates a hot spring. Some have waters that are cool enough. Let’s know more about this topic.

What are Hot Springs?

A hot spring is a natural spring of water that is heated by geothermal activity deep in the earth. The water in a hot spring is usually warmer than the surrounding air, and it may be rich in minerals such as sulfur or other dissolved solids.

These are often found in areas where the earth’s crust is thin and there is volcanic activity, and they can range in temperature from warm to very hot. Some are used for recreational purposes, such as soaking in pools or baths, while others are used for their therapeutic properties, as the minerals in the water are believed to have health benefits.

How are they formed?

As the water is heated, it rises to the surface through cracks and fissures in the earth. The water may also be forced to the surface by underground pressure, forming a natural spring. The minerals in the water may be dissolved from the surrounding rock, giving the water its unique chemical composition and therapeutic properties.

This can be found in many parts of the world, including the United States, Japan, New Zealand, and many other countries. They are often located in areas of geothermal activity, such as near volcanoes or in tectonically active regions.

What are the geothermal features of hot springs?

How are hot springs useful for humans?

Hot springs have a number of uses for humans, both recreational and therapeutic.

Recreationally, these are often used for soaking in pools or baths. The warm water can be relaxing and soothing, and many people find it to be an enjoyable and therapeutic activity.

Therapeutically, these are believed to have a number of health benefits due to the minerals present in the water. Some people believe that soaking in a hot spring can help to improve circulation, reduce stress, and alleviate muscle and joint pain. The minerals in the water, such as sulfur and other dissolved solids, are also thought to have therapeutic properties and may be beneficial for certain skin conditions.

In addition to these uses, these have also been used for centuries by indigenous people for spiritual and ceremonial purposes. Some are considered sacred and are used in traditional rituals and ceremonies.

There are many hot springs in India, with many located in the Himalayan mountain range. Some well-known in India include:

There are many other springs in India, and they are popular tourist destinations due to their therapeutic and recreational uses.

Hot springs can form in a number of ways, but the most typical is when groundwater or rainwater is heated by magma below the Earth’s surface. Through surface fissures or fractures, where it comes into contact with hot rocks and is heated, water can move deeper into the Earth’s mantle. We’ve seen what hot springs are so far in this article.

This can be a well-liked vacation spot for a variety of reasons. For instance, these are rich in minerals like radium, lithium, and calcium, which some people think have therapeutic benefits. Some rehabilitation facilities for people with disabilities include hot springs. Many spas have originated from hot springs, such as the numerous onsens in Japan.