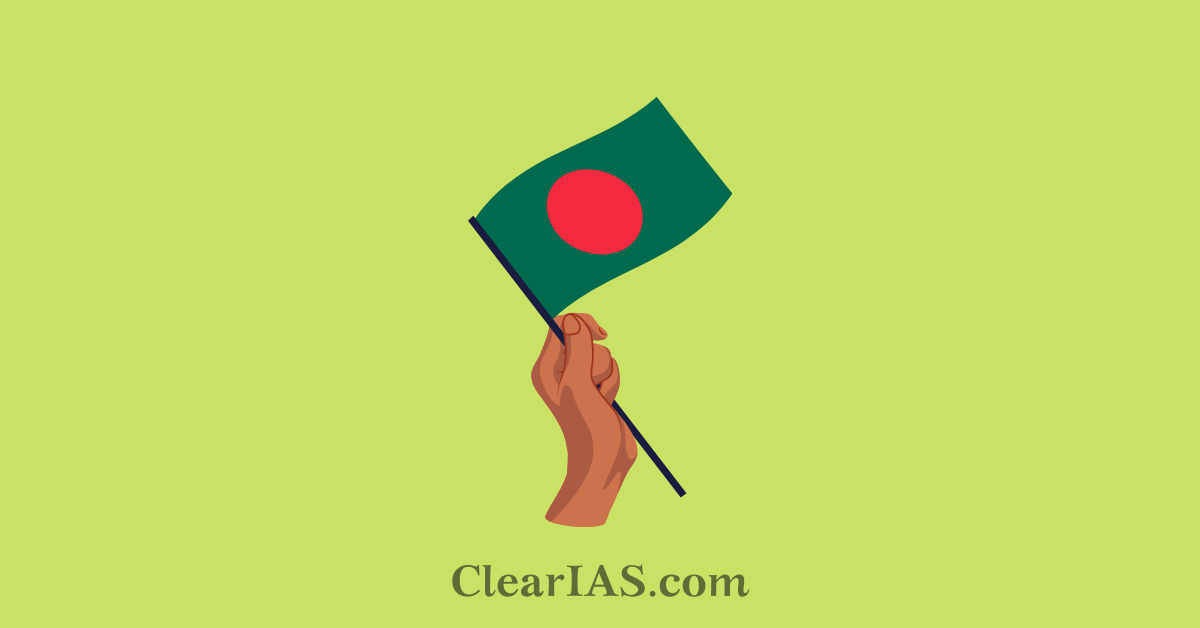 What caused the Bangladesh liberation war of 1971? What was India’s role and significance in it? Read to know all about the Indo-Pak war of 1971 here.

This war resulted in the independence of Bangladesh from West Pakistan.

The background events of the Indo-Pak War of 1971 are summarised below.

Historically, the seeds of trouble were sown in 1905 when Viceroy Curzon partitioned Bengal based on religion. East Bengal was Muslim dominant region while the west was Hindu-dominated.

After the 1947 partition of India, East Bengal became a province of Pakistan and was called East Pakistan then onwards. The east and west Pakistan were not only separated geographically, but they differed in language, culture, etc also. This led to problems in governance as well. The only common ground between the two provinces was religion,

Note: The UN celebrates the International Mother Language Day on 21st February in commemoration of the 1952 police firing on language rallies in East Bengal.

The 1954 provincial elections saw landslide victory of Mujibur Rehman’s Awami League over the Muslim league. However, west Pakistan was not willing to let a leader from its eastern provincial wing rule the country.

Riots exploded in the province and using this instability as an excuse, the central government established the governor’s rule in the province overturning the election results.

In 1956, Pakistan finally got its constitution, and Pakistan was declared the Islamic Republic. The national parliament was to comprise of one house with equal representation from east and West Pakistan.

1970 Cyclone Bhola caused floods and 3-5 lakhs deaths in East Pakistan, but the Yahya Khan’s government did not provide adequate relief. This added to the animosity between the two regions.

This led to civil disobedience and a call for independence in Dhaka and on 23 March 1971 flag of Bangladesh was raised for the first time.

The Bengali armed resistance Mukhti Bahini arose against the Pakistan army and the Indian forces helped them with arms and training.

India had a very crucial geopolitical motive to help Bangladesh due to the turbulent relationship with Pakistan. A win for the Bengali movement meant a peaceful eastern frontier for India. And as an immediate reason, the refugee crisis was becoming a huge economic burden for India.

On the global scale, the U.S –Soviet tensions were high. India had signed a Friendship treaty with Russia hence the U.S was supporting Pakistan throughout all this.

The war was on the doorstep now.

December 4: Battle of Longewala takes place in Rajasthan where Pakistani advance towards Jaisalmer is thwarted

December 5: Battle of Ghazipur in East Pakistan. Battle of Basantar in the Western sector in Pakistan’s Punjab in the Shakargarh salient near Sialkot. Battle of Dera Baba Nanak in Gurdaspur district of Punjab

December 6: India formally recognizes Bangladesh as an independent nation. The city of Jessore is liberated

December 7: Battle of Sylhet and Moulovi Bazaar begins in Bangladesh

December 9: Indian Army fights Battle of Kushtia in Bangladesh. Chandpur and Daudkandi liberated. A helicopter bridge airlifts Indian troops across the Meghna river and makes the fall of Dhaka a matter of time

December 11: Tangail airdrop of a Parachute Battalion to cut off retreating Pakistani troops in Bangladesh

December 12 to 16: Indian forces push through to Dhaka and enter the city.

Mujirbur Rahman was released from prison in January and went on to become the first Prime Minister of Bangladesh.

Shimla Agreement was signed between India and Pakistan on 2nd July 1972- The LoC was recognized, India gave back occupied land back to Pakistan, PoWs were repatriated and the Kashmir issue was agreed to be discussed peacefully.

How did the Indo Pak War 1971 shape today’s India-Bangladesh relations?

The Indo-Pak war of 1971 liberated Bangladesh and established a friendly neighbourhood on the eastern front for India. Bangladesh is India’s largest trading partner in South Asia and one of the fastest-growing economies. Indian firms have huge investment opportunities in the country due to their growth potential. Bangladesh is crucial for India’s connectivity and peace in the north-eastern states.

Bangladesh has a special place in India’s neighbourhood first policy and the relation is ever more crucial in the current geopolitical scenario as well.