ClearIAS » Current Affairs Notes » Manual Scavenging: Why It is Still Prevalent in India? 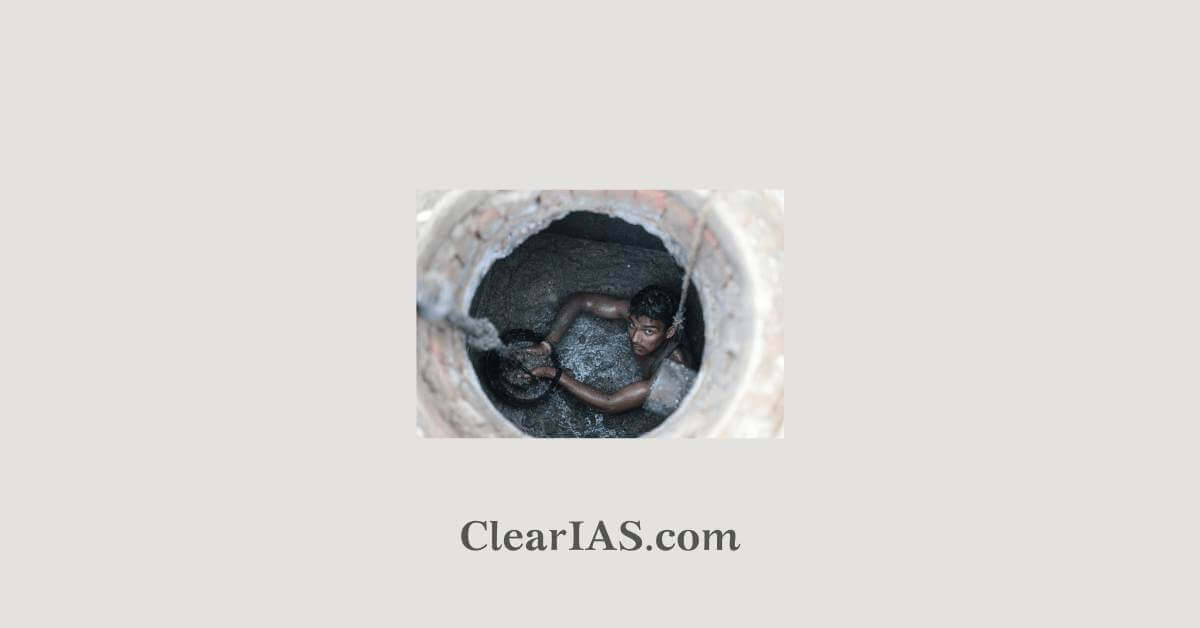 The practice of manual scavenging is banned in India, but still prevalent in many parts of the country.

Manual scavenging, according to the UN India, is the act of manually cleaning, disposing of, or handling human excreta from sewers, septic tanks, and dry latrines.

According to recent official data, 42,000 of the 43,797 identified manual scavengers are Dalits or Scheduled Castes (SC) members.

As per the Prohibition of Employment as Manual Scavengers and their Rehabilitation Act, 2013 ‘manual scavenger’ are defined as:

“Manual scavenger” means a person engaged or employed, at the commencement of this Act or at any time thereafter, by an individual or a local authority or an agency or a contractor, for manually cleaning, carrying, disposing of, or otherwise handling in any manner, human excreta in an insanitary latrine or in an open drain or pit into which the human excreta from the insanitary latrines is disposed of, or on a railway track or in such other spaces or premises, as the Central Government or a State Government may notify before the excreta fully decomposes in such manner as may be prescribed, and the expression “manual scavenging” shall be construed accordingly”.

The Prohibition of Employment as Manual Scavengers and their Rehabilitation Act (PEMSR) of 2013 banned the manual cleaning practice in India. Human excreta cannot be manually cleaned, carried, disposed of, or handled in any other way until it is disposed of, according to the Act.

Why the practice of Manual Scavenging is still prevalent in India?

Under the Employment of Manual Scavenging and Construction of Dry Latrines (Prohibition) Act, sanitation personnel has been prohibited from manually collecting human waste in our country since 1993.

It is widely used and continues to provide many people with a means of living. One of the most oppressed and poorest communities of mankind is that of manual scavengers.

For manual scavengers, finding alternative forms of employment is challenging due to the stigma and discrimination connected with such work.

Even in major cities like Bengaluru and Mumbai, crime is still underreported. Moreover, helplines have been established by certain state governments to report instances of manual scavenging. However, the reaction to the same has not been satisfactory.

Manual Scavenging violates a number of constitutional provisions as well.

Article 14: Equality before the law

The State shall not deny to any person equality before the law or the equal protection of the laws within the territory of India Prohibition of discrimination on grounds of religion, race, caste, sex, or place of birth.

Here, individuals are forced into such professions as they are unable to get any other job because of the stigma attached to this job and become unable to sustain their families.

Untouchability is abolished and its practice in any form is forbidden. The enforcement of any disability arising out of Untouchability shall be an offense punishable in accordance with the law.

According to Section 7A of the aforementioned Act, anyone who forces someone to engage in scavenging on the grounds of untouchability is considered to have enforced a disability resulting from untouchability, which is punished by imprisonment.

No person shall be deprived of his life or personal liberty except according to a procedure established by law.

Plenty of people lose lives during such unsanitary practices of scavenging and die because of suffocation, harmful gases released through sewers, and other inhumane reasons.

Article 23: Prohibition of traffic in human beings and forced labor.

In addition to the provisions of the Constitution, India is a party to a number of international conventions and covenants that forbid the cruel practice of manual scavenging. These are the Convention on the Elimination of All Forms of Discrimination Against Women (CEDAW), the Convention on the Elimination of Racial Discrimination (CERD), and the Universal Declaration of Human Rights (UDHR).

Steps Taken by the Government

The government implemented the Prohibition of Employment as Manual Scavengers and their Rehabilitation Act, 2013, under which the definition has broadened and manual cleaning now goes beyond dry latrines and includes all forms of cleaning like handling in any manner, human excreta in an insanitary latrine or in an open drain or pit and railway tracks as well.

The government has implemented the Building and Maintenance of Insanitary Latrines Act of 2013 which banned the construction or maintenance of unsanitary toilets. Along with outlawed employing any person for manual scavenging. As compensation for historical injustice and indignity, the act also establishes a constitutional obligation to offer alternative employment opportunities and other forms of support to communities that rely on manual scavenging.

Ministry of Housing and Urban Affairs launched Safaimitra Suraksha Challenge on World Toilet Day (19th November) in 2020 to challenge all states to create a mechanized system of sewer cleaning.

Prohibition of Employment as Manual Scavengers and their Rehabilitation Act, 2013

It extends to the whole of India except the State of Jammu and Kashmir.

The act prohibited any engagement and employment of manual scavengers with insanitary latrines and also prohibited the person’s engagement in the hazardous cleaning of sewers and septic tanks.

Rehabilitation of persons identified as manual scavengers must be done by a Panchayat for Rural areas and by Municipality for other areas.

An offense under the act is cognizable and non-bailable and is to be tried by the Executive Magistrate.

Every local authority and other agency is required to employ the most up-to-date technology tools to clean the sewers, septic tanks, and other areas under their jurisdiction in order to do away with the need for handling excreta by hand.