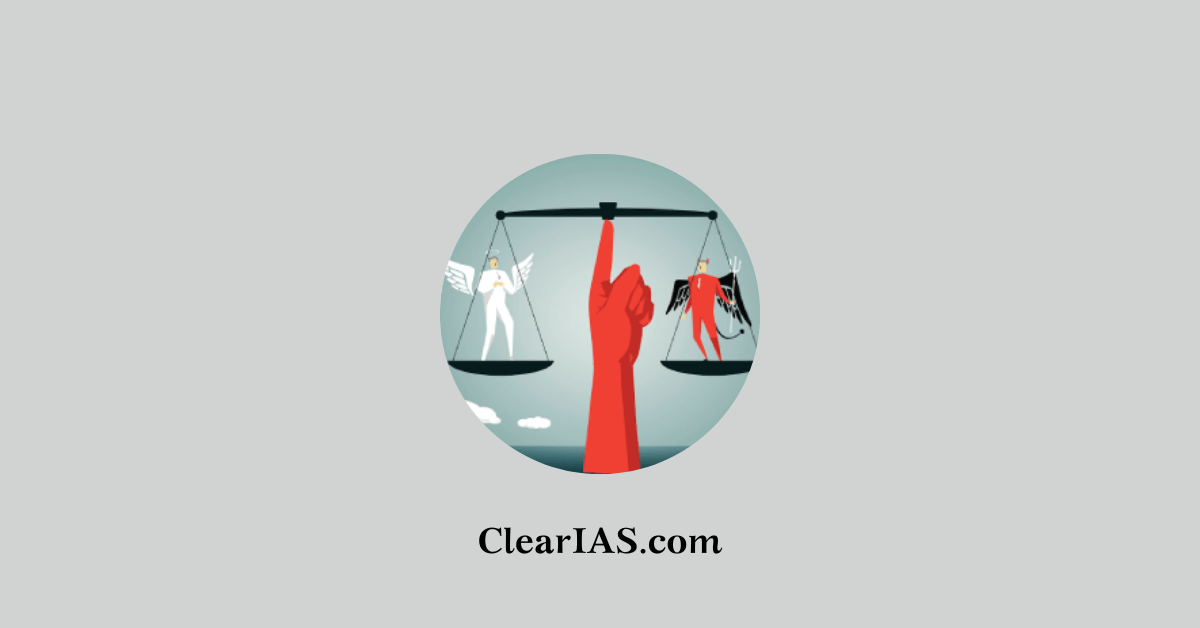 What are moral and political attitudes? What are their characteristics? What are the four stages in the process of forming a political mindset? Read further to know more.

An attitude is an appraisal of an object that is conveyed with a certain degree of intensity and can be either positive, negative, or mixed. The intensity of our attitude might change along with good effect, negative affect, ambivalence, or apathy and indifference.

It is commonly known that among all categories of natural values, ethical values rank highest. Moral principles such as goodness, purity, truthfulness, and humility of man are valued more highly than qualities such as genius, brilliance, exuberant vitality, and the beauty of nature or of art, as well as stability and power of a state.

Studies have shown that moral ideals are always a person’s particular values. Only man is capable of possessing them and realizing them. A person is morally good or bad depending on his or her acts and attitudes, will and efforts, love and hatred, joy and sadness, and fundamental attitudes.

A man with these qualities—humility, purity, honesty, and affection—will have a personality that exudes moral principles.

Moral attitudes have the advantageous implication that they are entangled with powerful emotions. As a result, normal societies avoid abnormal behaviors out of fear of social ostracization, such as child molestation.

The foundation for realizing a man’s moral principles is the capacity to hold moral beliefs, uphold them, and respond to them. Only the individual who possesses reverence bears these signs.

An emotion or attitude of profound respect for others that is tinged with wonder is known as reverence. It is the mindset that can be referred to as the beginning of all moral life since it is in it that man first adopts a posture toward the world that allows him to make spiritual judgments and understand values.

Reverence t is the essential prerequisite for all deep knowledge, especially the ability to understand values. Every response to value, every surrender of anything valuable, is predicated on reverence, which is also a necessary component of that response.

The foundation of all moral behavior toward our fellow humans and toward ourselves is the fundamental attitude of reverence.

Every true love begins with the fundamental attitude of reverence. Similar reverence is seen in acts of kindness toward others, respect for another’s rights and freedom to make decisions, restraint of one’s own hunger for power, and awareness of another person’s rights in all contexts.

Among the characteristics of a person’s moral attitude that are fundamental to his or her entire moral existence, faithfulness is another crucial aspect.

Faithfulness is the idea of consistently putting one’s allegiance into action and remaining faithful to someone or something, despite adverse circumstances.

A man will be more capable of becoming a vessel of moral ideals, a creature in whom purity, justice, humility, love, and goodness will dwell permanently and radiate from him to the world around him, the more faithful, consistent, and solid he is. This loyalty in the truest meaning of the word is a basic moral principle that applies to all people.

Reliability is yet another fundamental predicate of a person’s moral life. A person who is dishonest not only displays a serious moral deficiency, but also suffers from crippling effects on every aspect of his personality, moral life, and ability to uphold moral principles.

The dishonest individual does not hold values in high regard. He takes a lordly posture over the being and handles it any way he pleases. This attitude conveys a sense of haughtiness, disdain, and impertinence.

Integrity, constancy, and responsibility awareness are the cornerstones of a moral existence in general. It has a great value in and of itself, and like these other qualities, it is also necessary as a fundamental assumption of a personality which is true.

The foundational element of moral principles is goodness. Goodness is the only moral value that more fully embodies the entire reign of moral values than any other.

A man’s goodness is not restricted to having kind thoughts for just one person they adore. When someone is described as being good, it indicates they consistently demonstrate their open goodness and have a loving, giving character toward all men.

Because goodness is a fundamental attitude and position rather than being restricted to a specific transient attitude like every other virtue.

Political attitudes are people’s perspectives on the aspects of public life that political psychology studies, such as opinions on nationalism, political conservatism, political liberalism, and political radicalism.

Political views range from being exceedingly liberal to being extremely conservative. According to a large number of academics, a political attitude refers to the beliefs and values that support the functioning of a given political system.

These attitudes were considered to include both favorable and negative evaluations of the political system, as well as knowledge and abilities on how it functions. Which political parties people support, how they vote, and how they participate are all influenced by these attitudes. Family, gender, religion, race, ethnicity, and area are the factors that influence opinions.

In most cases, the first and most enduring effect on young people’s political ideas comes from their families. Despite generational differences and incongruities within the family, children often have political views that are similar to those of their parents.

Children prefer to vote in the same manner as their parents, which is understandable despite generational differences. Children from politically engaged families are more likely to share their parents’ values and outlooks.

As kids get older and are exposed to outside influences, their perspectives inevitably veer away from their parents.

Voting behavior is frequently influenced by religious beliefs. Religion is the belief system that individuals adhere to. Recent events have shown that the religious right has favored Republican Party candidates over Democratic Party candidates by endorsing more conservative candidates for public office.

People that identify with the “Religious Right” have different political views than everyone else. The religious right generally leans toward conservatism. This tendency is more obviously connected to social problems like gay rights and cow protection than it is to economic or international concerns.

It has been determined that African Americans have been more closely associated with the Democratic Party over the past 50 years than any other recognized group.

Some experts think that this allegiance is dwindling. Numerous studies have shown that Asian Americans tend to vote conservatively, although there is still a dearth of hard data to support this.

A lot of academics have stated that economic pressures are a major motivator for selecting a specific political position, and this does actually seem to be a significant role. Typically, those who are prospering in society do not want it to alter.

The impoverished, on the other hand, stand to benefit greatly from gradual change and have little tangible to lose. Possibly, at least.

However, economics is not the only determinant of political beliefs.

Age plays a significant role in the formation of political attitudes. Young people are typically more liberal than older people. This may be due to the elder generations’ inherent interest in maintaining the status quo, which the younger generations do not yet have.

In addition to lacking money, young people also lack a sense of loyalty and community.

Certain individuals are more suited psychologically to liberalism or conservatism than others. One must have a relatively high tolerance for disarray in order to be liberal.

The nature of people

It is a key determinant of political attitude. One is likely to tilt to the right of the spectrum if one think that most humans are fundamentally selfish, bad, and violent.

Anyone who believes that people are inherently wicked will have a tendency to rely on harsh regulations and severe penalties for those who break them in the assumption that such actions are required to curb inappropriate behavior.

People who believe their coworkers are generally well-meaning and rational, on the other hand, will tend to lean left. They will make an effort to avoid limiting human liberty with “needlessly” strict rules and to negotiate with offenders.

It has been seen in our social structure that women frequently adopt political attitudes that differ from those of their husbands or other family members, notwithstanding this tendency. Since they seek equal rights, equal pay, better chances, etc., women generally lean toward liberal.

But their political opinions also depend on their family, social position, and religion. Women are more inclined to support their political parties when the chief minister is a woman (such as Jayalalitha or Mamta Banerjee).

Women have started casting their votes for parties that support “women’s issues,” such as women’s protection, reservation, equal pay, and equal legal rights, in the current political climate.

Process of developing a political stance

Every society aims for the efficient governance of its citizens to ensure the smooth operation of the system and to sustain harmony and coordination within the community.

The state, the government, the political parties, and the election or selection of representatives are just a few of the mechanisms or agencies that any society develops. How people develop their political attitudes and how they transmit their ideals from one generation to the next are guided by political attitude formation.

A person develops orientations, ideas, values, norms, and behavioral patterns relevant to the political system through the process of developing their political attitude.

Stages in the process of forming a political mindset

There are four stages in the process of forming a political mindset, according to Easton and Dennis.

Functions of the formation of political attitudes

Five groupings can be used to classify the various agents that influence how political attitudes are formed.

This spectrum generally illustrates how people feel about social concerns and the place of government in society. Liberals, who tend to reside in the Northeast and the West Coast, have traditionally held the view that the government should focus more on assisting the economy and less on foreign policy.

Part of Political ideology and attitude are crucial in determining political ethics because:

In conclusion, moral views inspire people to engage in altruism, voluntarism, and social service. Because moral attitude is such a powerful emotion, it may be used as a defense against violent behavior and insane behavior and yet be accepted by society.

Political attitude is a belief and behavior system that bases decisions on electoral outcomes.

It resembles a party’s internal constitution. Every political party has a sound and pro-people political ideology, but they rarely adhere to it because, in order to win elections, individual politicians’ political attitudes are put into action, leading to the use of bribery, lobbying, false protests, walkouts, insensitive defamation of other parties, and perks politics.