The Indian ports play a primary contributing role in this fast-growing economy, around 95% of merchandise trade passes through Indian seaports. However, as compared to foreign ports, Indian ports continue to trail behind in a number of areas. In order to address all the problems faced by Indian ports, the Sagarmala project has been launched. Read more about it.

The Hindi words “Sagar” and “mala,” which both mean “garland,” are combined to form the name “Sagarmala.” It was initially released in 2003 but never gained traction. In 2014, it was reinstated.

It helps to improve and foster the businesses and eventually the economy of India.

It boosts the Indian economy and global supply chain and improves its reputation at the global level.

What is Sagarmala Program?

The Sagarmala Programme is an initiative by the Shipping Ministry to utilise India’s 7,500 km of coastline and advantageous location in the Indian Ocean Region.

It is a port-led development initiative that aims to enhance infrastructural growth, which will improve logistical competitiveness, increase industrialisation and job creation, and ultimately support the growth of the coastal economy as a whole.

It strives to improve connection with major economic centres and beyond by expanding rail, inland water, coastal, and road services. It also promotes the optimal modal split and develops access to new growth zones.

What is the Vision of Sagarmala Project: 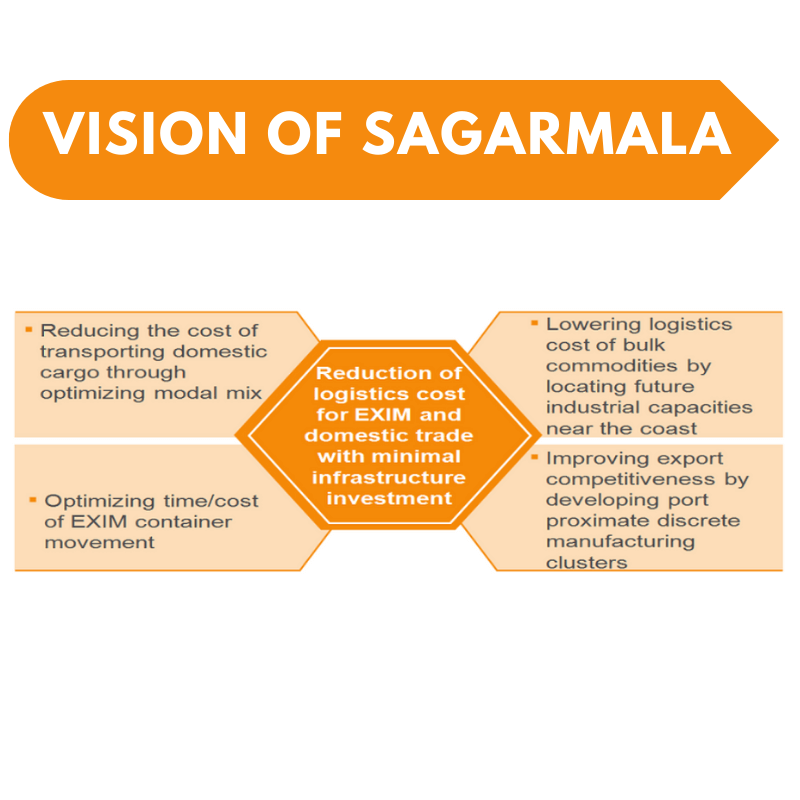 What are the pillars of the program?

Institutional Framework of the Program:

The programme was created with platforms for collaboration between federal, state, and municipal authorities and was intended to be executed along the lines of cooperative federalism.
The Public-Private Partnership (PPP) approach is primarily used to carry out projects.

Why is port-led development crucial for India?

Other Coastal Developments by GOI under Sagarmala Project

In the 72 districts close to the shore, about 18% of Indians are said to reside. Furthermore, 12% of the population of mainland India resides in these districts.

The Sagar Mala Project, which the GOI (Government of India) is implementing, includes coastal improvements like fisheries, maritime tourism, and skill development for locals.

Additionally, a significant initiative undertaken to boost employment prospects and economic growth is the expansion of cruise tourism.

What are the challenges?

The Sagar Mala Project’s intensive and efficient port operations and coastal community development have the potential to dramatically increase India’s GDP. It has already given residents of 72 districts along the coastal area growth, jobs, and essentials of life.

By 2035, it is anticipated that all Sagarmala Project objectives would have been accomplished. The government has been incredibly successful in reaching its goal thus far thanks to the Programme’s quick daily progress, and we have great faith in its capabilities, strength, and power.

Although coastal development is important for economic growth, it shouldn’t come at the expense of thousands of marginalised people’s livelihoods and environmental deterioration. Therefore, the project must receive the required finance and adjustments to make it more accessible and environmentally sustainable.