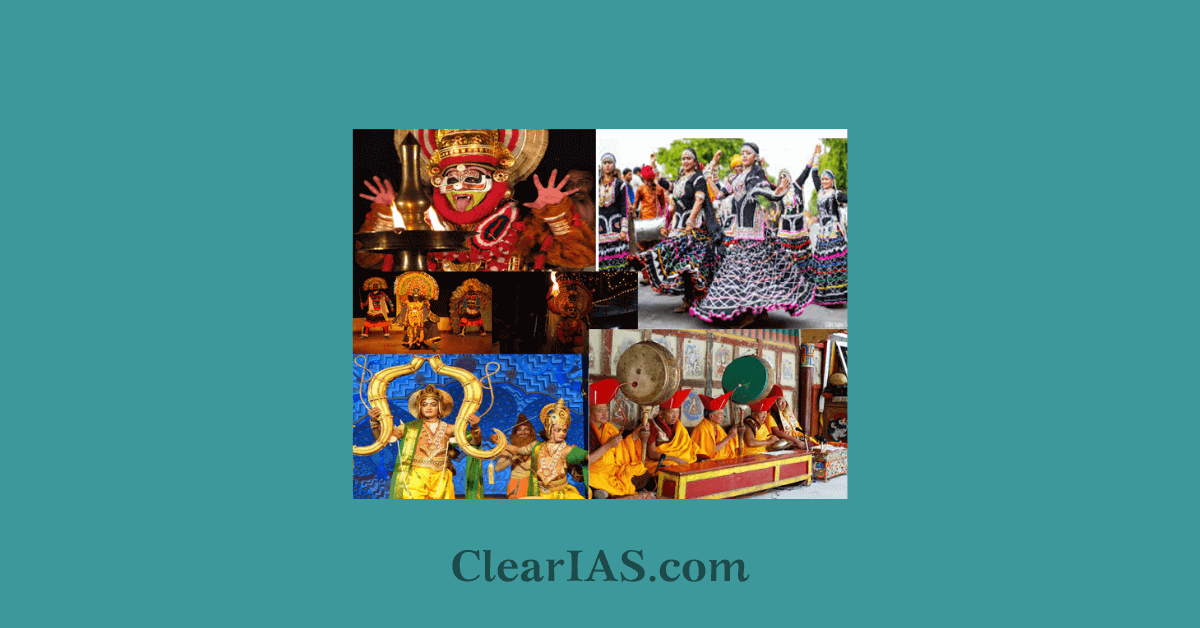 UNESCO’s Intangible Cultural Heritage (ICH) thrives to preserve the cultural expressions of the world. Read here to know about the significance and efforts of the Convention.

India has been elected to the Intergovernmental Committee of UNESCO’s 2003 Convention for the Safeguarding of the Intangible Cultural Heritage (ICH) for the 2022-2026 cycle.

What is Intangible Cultural Heritage?

The term ‘cultural heritage’ has changed content considerably in recent decades, partially owing to the instruments developed by UNESCO.

Cultural heritage does not end at monuments and collections of objects. It also includes traditions or living expressions inherited from our ancestors and passed on to our descendants, such as:

While fragile, ICH is an important factor in maintaining cultural diversity in the face of growing globalization. An understanding of the ICH of different communities helps with intercultural dialogue and encourages mutual respect for other ways of life.

The social and economic value of the transmission of knowledge natural heritage is relevant for minority groups and for mainstream social groups within a State and is as important for developing States as for developed ones.

The Representative List of the Intangible Cultural Heritage of Humanity currently has 492 elements.  It includes forms of expression that testify to the diversity of intangible heritage and raises awareness of its importance.

By enhancing the visibility of communities’ cultural practices and know-how, UNESCO aims to safeguard the intangible cultural heritage of communities globally.

UNESCO’s Convention for Safeguarding the ICH

The Convention of the Safeguarding of the Intangible Cultural Heritage was adopted by the United Nations Educational, Scientific and Cultural Organization (UNESCO) in 2003 and entered into force in 2006.

It comprises 24 members and is elected in the General Assembly of the Convention according to the principles of equitable geographical representation and rotation.

Members of the Committee are elected for a term of four years.

India as a member of the Convention for Safeguarding the ICH

The Ministry of Culture has appointed the Sangeet Natak Akademi, an autonomous organization under the Ministry of Culture, as the nodal office for matters relating to the intangible cultural heritage including for the preparation of the nomination dossiers for the Representative List of UNESCO.

The Ministry of Culture makes regular Schemes, as well as organizations, make efforts toward the preservation, protection, and promotion of intangible cultural heritage in the country.

Various autonomous bodies under the Ministry of Culture have comprehensive mandates in this regard and are functioning in various spheres of preservation and promotion of intangible cultural heritage and diverse traditions of the country.

Some of the major organizations involved in the preservation of propagation of ICH are named below:

Apart from these, there are a number of schemes under the implementation of the Ministry of Culture for providing financial assistance to artists & institutions involved in the promotion/propagation of the various forms of ICH.

In addition, the Ministry of Culture implements, since the year 2013-14 also, a scheme titled “Scheme for Safeguarding the Intangible Cultural Heritage and Diverse Cultural Traditions of India” with the aims and objectives of professionally enhancing awareness and interest in ICH, safeguarding, promoting, and propagating it systematically.

The latest, Durga Puja of Kolkata was added to the list in 2021.

List of Indian elements and year of their inscription:

The National List of Intangible Cultural Heritage (ICH) of India is an attempt to recognize the diversity of Indian culture embedded in its intangible heritage. It aims to raise awareness about the various intangible cultural heritage elements from different states of India at the national and international levels and ensure their protection.

Following UNESCO’s 2003 Convention for the Safeguarding of the ICH this list has been classified into five broad domains in which intangible cultural heritage is manifested:

The present items in the list have been assembled from the projects sanctioned under the scheme for ‘Safeguarding the ICH and Diverse Cultural Traditions of India’ formulated by the Ministry of Culture.

The scheme aims at reinforcing the diverse cultural expressions that are necessary for the continuous evolution and interpretation of intangible cultural heritage in India, as well as their transmission to future generations.