In this post, we discuss the Anti-Defection Law which is part of Indian Constitution since 1985. The law sets the provisions for disqualification of elected members on the grounds of defection to another political party (Eg: If elected MPs of Congress shift their allegiance to BJP or vice versa). We will also see the need for reforms in the anti-defection law.

What is anti-defection law?

The Tenth Schedule of Indian Constitution is popularly known as the Anti-Defection Act. Original constitution had no such provisions. It was included in the Constitution in 1985 by the Rajiv Gandhi government. The main intent of the law was to deter “the evil of political defections” by legislators motivated by the lure of office or other similar considerations.

What are the grounds for disqualification under the Anti-Defection Law?

As a pre-condition for his disqualification, his abstention from voting should not be condoned by his party or the authorised person within 15 days of such incident.

Points to be noted regarding anti-defection

Questions of ‘split’ and ‘merger’: Loopholes in anti-defection law 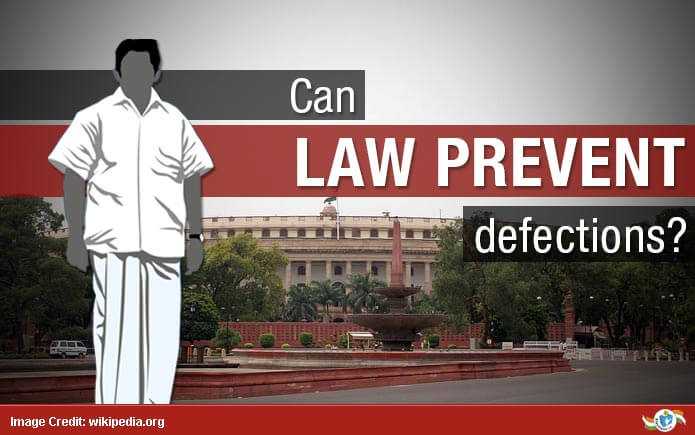 Initially, the law allowed defections if it involved one-third members , ie. it had provisions regarding exemption from disqualification in case of a ‘split’ in a political party. But undesirably it resulted in mass defections instead of individual defections.

The issue of mass defection because of the 1/3rd rule was remedied through the 91st amendment which increased the bar from one third to two third. Thus at least two-thirds of the members of a party have to be in favour of a ‘merger’ for it to possess validity in the eyes of the law.

What is not defection?

Speaker/ chairman of the house is the authority to decide on defection cases. Speaker sits as a tribunal while deciding on defection cases. All proceedings in relation to any question on disqualification of a member of a House under this Schedule are deemed to be proceedings in Parliament or in the Legislature of a state. No court has any jurisdiction. However, the decision can be brought to court after Kihoto Hollohan case of 1992.

The law states that the decision is final and not subject to judicial review. The Supreme Court struck down part of this condition. It held that there may not be any judicial intervention until the presiding officer gives his order. However, the final decision is subject to appeal in the High Courts and Supreme Court.

Does anti-defection law curtail the right of free speech of legislators?

This issue was addressed by the five-judge Constitution Bench of the Supreme Court in 1992 (Kihoto Hollohan vs Zachilhu and others). It held that the law does not violate any rights or freedoms, or the basic structure of parliamentary democracy.

See the UPSC CSE Mains question for General Studies paper 2 in 2013. It has a question (Question No:1) connected to anti-defection.

Question: The role of individual MPs (Members of Parliament) has diminished over the years and as a result healthy constructive debates on policy issues are not usually witnessed. How far can this be attributed to the anti-defection law, which was legislated but with a different intention?

Possible reforms that can be made to anti-defection law: