We hear news about Black Money in Indian economy very often these days. But what exactly is Black money? What makes money black or white? This short analysis is a humble attempt to cover essentials one should know about the black money issue in India.

It is to be noted here that there is no clear cut definition for black money in either economic or sociological concepts. In very simple terms we can say any money which is not accounted as one or another form of black money.

Black money is often money illegally obtained or transacted. As being unaccounted money, black money is not declared for tax purposes. Black money is also hidden from the government authorities which calculates national income like GDP, GNP etc.

Black money is not fake notes!

Ideally all transactions where money change hands should be accounted. This helps the government to collect taxes.

But if money change hands without proper accounting (Eg: cash transactions), government may fail to notice even the presence of such money in the economy. Besides, there are many economic transactions in the countries which are by the nature itself illegal (Eg: Smuggling). These transactions can by now means taxed. All these unaccounted money can be classified under the umbrella term – black money.

Cash transactions can be black money!

You may wonder; but if cash change hands without proper transaction accounting, the money involved is black money!

How is black money generated in an economy?

Some very common forms of this menace may include:

The black money problem in India 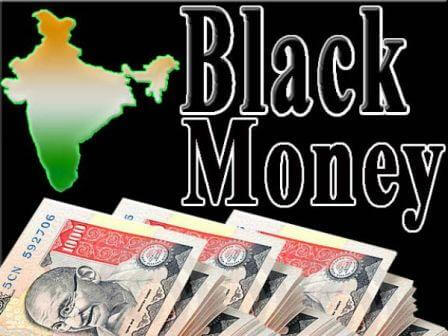 The problem of black money in India started popping up by 1960’s. This is mainly attributed due to the high level of income tax and corporate tax charged then. This resulted in huge tax evasion by individuals and business communities. Now, after liberalization in 1991, the black money issue has compounded.

Estimates of Black Money in India

As black money is not accounted it is not easy to estimate it either. Different reports suggests different estimates. Some estimates are as below:

Indian Black Money – Abroad or in India itself?

There are many experts who consider that 90 percent of India’s black money stays in India itself. Some value it around 70 lack crore. This is because funds transferred to foreign banks fetch very little or no bank interest. But at the same time, the booming Indian economy offers large scope for investment.

According to one study, out of 100 rupees of black money generated in our country, 90 percent stays in India. The balance 10 percent is takes the form of round tripping and transfer pricing; while a little portion is consumed abroad itself.

Can black money be made white money?

The after effects of black money in our economy is manifold and have serious consequences. Some of the negative impacts are listed below.

Different steps has been formulated to curb the menace of black money in India. There were co-ordinated efforts from the part of government, RBI, and Supreme court. Steps taken include:

It is to be noted here that though we have formulated different strategies and policies to combat black money, its effect is not reflected in implementation. The need of the hour is greater political will and global coordination to counter the issue.

Article by Sandeep A