The Panama Papers are documents which were leaked from Mossack Fonseca, a Panama-based law firm offering legal and trust services. It is alleged that many of these documents show how wealthy individuals – including public officials – hide their money from public scrutiny.

Panama Papers: What is it? 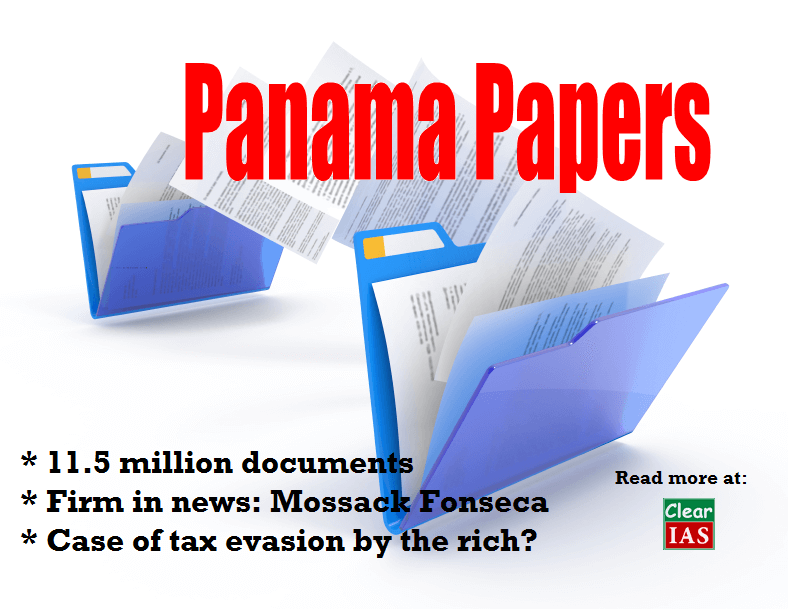 What does Mossack Fonseca do?

How the leak was possible?

Who are involved in the Leaked Papers?

Note: The newspaper states that while RBI let individuals buy shares under LRS (Liberalised Remittance Scheme), it never allowed them to set up companies abroad, having clarified it through an FAQ mid-way in September 2010.

While one is travelling abroad, on a private visit, (other than to Nepal and Bhutan), he can obtain foreign exchange up to an aggregate of USD 2,50,000 (only 3,000 as cash, rest as travellers cheque or banker’s draft) in any financial year. This limit is also subsumed under LRS.

Are all people who use offshore structures crooks?

Are some people who use offshore structures crooks?

What are Tax Havens?

What are Shell Companies?

What is money-laundering (in a nutshell…)?

It literally means laundering (cleaning) the dirty money, so that one can use it without evoking any suspicion. There are many ways to launder the money like using Bearer Bonds or paying for non-existent imports, or even buying toilet papers for a million Rupees (inflating the price).

What is Mossack Fonseca’s take on Panama Papers?

Their press release is as below:

Recent media reports have portrayed an inaccurate view of the services that we provide and, despite our efforts to correct the record, misrepresented the nature of our work and its role in global financial markets.

These reports rely on supposition and stereotypes, and play on the public’s lack of familiarity with the work of firms like ours.

The Panama Papers have evoked great interest from governments and civil society around the world. While some have used the opportunity to tar capitalism as a concept promoting crooks, the debate over bringing back the illicit money has gained more traction. The data is a shot in the arm for government of India as well, which was reeling without adequate information about black money abroad. The Government has done the right thing by constituting an inter-department investigation team to look into the veracity of the leaked papers. It would also be interesting to note whether the current dispensation has the spine to take action against the Who’s Who of India.