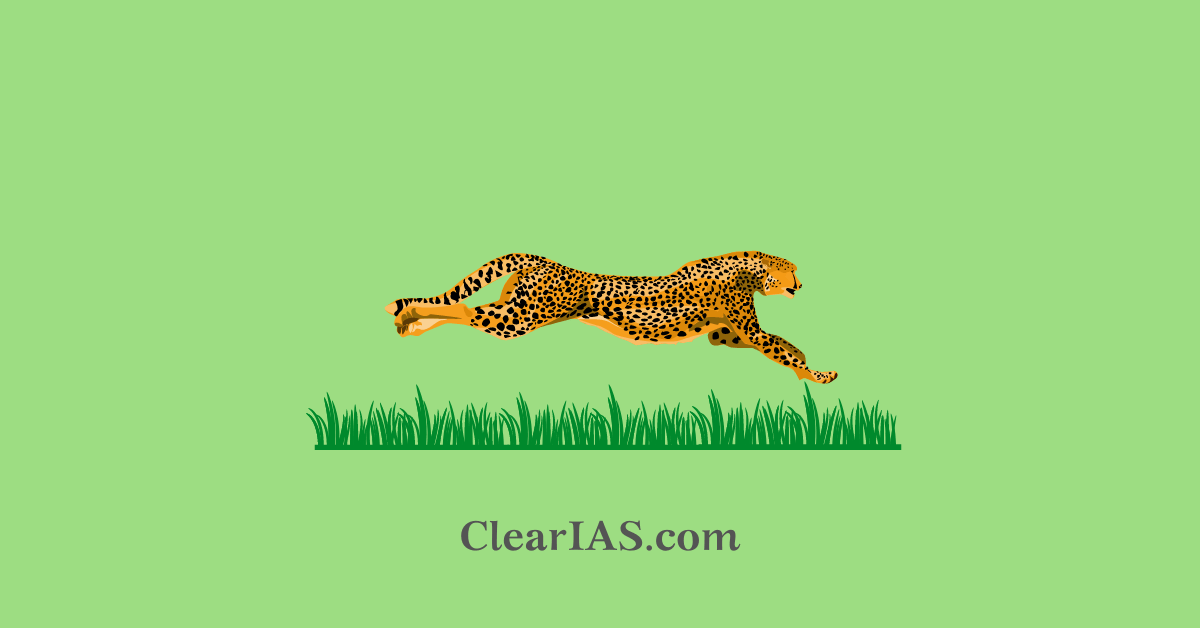 The Asiatic cheetah was the native species of cheetah in India until it became extinct in 1952. Exclusively about 12 Asiatic cheetahs remain in the wild today, and they are found only in Iran.

The majority of the surviving 7,000 big cats in the world are African cheetahs, including the ones that have recently arrived in India.

The cheetah, a member of the genus Panthera, Puma, and Acinonyx, will be the fifth of the world’s seven big cats to have a home in India. The other four are Tiger, Lion, Leopard, and Snow Leopard.

In 2009, India’s then-environment minister approved a plan to reintroduce cheetahs, but the Supreme Court rejected it in 2013. The government revived the concept in 2017, and the SC approved the action in 2020 on “an experimental basis.”

This will be the first time a huge carnivore has ever been moved from one continent to another.

The goal of the transfer is to create a cheetah metapopulation that will aid in the animal’s global conservation as well as restore India’s historical evolutionary balance.

The conservation of the Cheetah will revive grassland forests and their biome and habitat, much like Project Tiger have done for forests and all the species found in them.

The cheetah has a long history in the country; in Chaturbunj Nala in Mandsaur, Madhya Pradesh, a Neolithic cave painting depicting a “slender spotted feline being hunted” was discovered.

The Sanskrit term “Chitrak,” which translates to “the spotted one,” is said to be the source of the name “cheetah.”

It is believed that the cheetah disappeared from the landscape in 1947 and they were brutally killed and hunted down in India. The Indian government formally declared the cheetah extinct in 1952.

The details about the seven big cats are mentioned below-

Tigers are listed as “Endangered” by the International Union for the Conservation of Nature (IUCN) Red List of Threatened Species.

The tiger is the largest of all wild cats and the most ancient of the Panthera.

The tiger is primarily a forest animal that can be found from the Siberian taiga to the Sunderban Delta.

It is the national Animal of India, Malaysia, Bangladesh, and South Korea.

In the International Union for the Conservation of Nature (IUCN) Red List of Threatened Species, Lion is enlisted as “Vulnerable”.

Lion is native to Africa and Asia. They live in groups called “Prides” and they usually prefer open forests.

The lions are among the most recognized animal symbols, from Ashokan Pillars to the entrance of Buckingham palace.

In the International Union for the Conservation of Nature (IUCN) Red List of Threatened Species, Jaguar is enlisted as “Near Threatened”.

jaguar is the largest cat in America and has the strongest bite. Melanistic (Black) jaguars are the most common ones and are often called Black Panthers.

It is a unique genus within the cat family with only one living species which is Cheetah.

Cheetahs are listed as “Vulnerable” by the International Union for the Conservation of Nature (IUCN) Red List of Threatened Species.

A cheetah is the fastest land mammal and its grip helps it to accelerate faster than a sports car (0-100 km/hr in 3 sec.)

Leopard is similar in appearance to the jaguar. They are the most adaptable of all as they can survive in diverse habitats at all altitudes across Africa and Asia.

Snow Leopards are listed as “Vulnerable” by the IUCN Red List of Threatened Species.

Snow leopards live above the snow line in Central and South Asia.

Snow Leopards cannot roar and has the longest tail of all.

It is a state animal of Ladakh and Himanchal.

In the International Union for the Conservation of Nature (IUCN) Red List of Threatened Species, Snow Leopards are enlisted as “Vulnerable”.

Genus Puma is closely related to domestic cats and this genus has only one extant species which is known as Cougar.

Cougar is the second largest cat in America and the jaguar is the largest and has a range from the Canadian Yukon to Southern Andes.

It has the status of “Least Concern” on the IUCN Red List.

Why was Kuno National Park chosen for Cheetah Reintroduction?

Both Cheetah and Asiatic Lions share the same habitats semi-arid grasslands and forests that stretch across Gujarat, Rajasthan, and Madhya Pradesh.

The rainfall, temperature, and altitude in the Sheopur district, where Kuno is situated, are equivalent to those of South Africa and Namibia.

Genetic Diversity: Difficult to find genetically suitable animals, particularly to build a new population. This can lead to inbreeding and depression in the new population of Cheetahs.

Habitat and Prey Base: Before translocation, the factor responsible for the extinction of the special must be dealt with to secure the habitat in the wild. As per the experts, physical security, enough space, and ample food must be the priorities.

Landscape Viability: Animals (in this case, Cheetahs, as they are relocated) will remain susceptible to demographic and environmental events in such a broken landscape as it can lead to habitat fragmentation.

An appropriate strategy for monitoring with veterinary oversight and a scientific assessment of the degree of adaptation is required. A team should be there to monitor the status of cheetahs and other carnivores available in the wild.

Along with that, Various outreach and awareness events should be run to familiarise the locals with the reintroduction strategy in order to spread awareness among residents and sensitize the youth. A progressive move in this direction is Chintu Cheetah, the designated mascot for the Cheetah introduction project.

The protection of native species and their habitat should get equal consideration and to maintain the safety and satisfaction of the locals, it is important to develop a proper rehabilitation policy that includes proper communication between administrative officers and the residents.