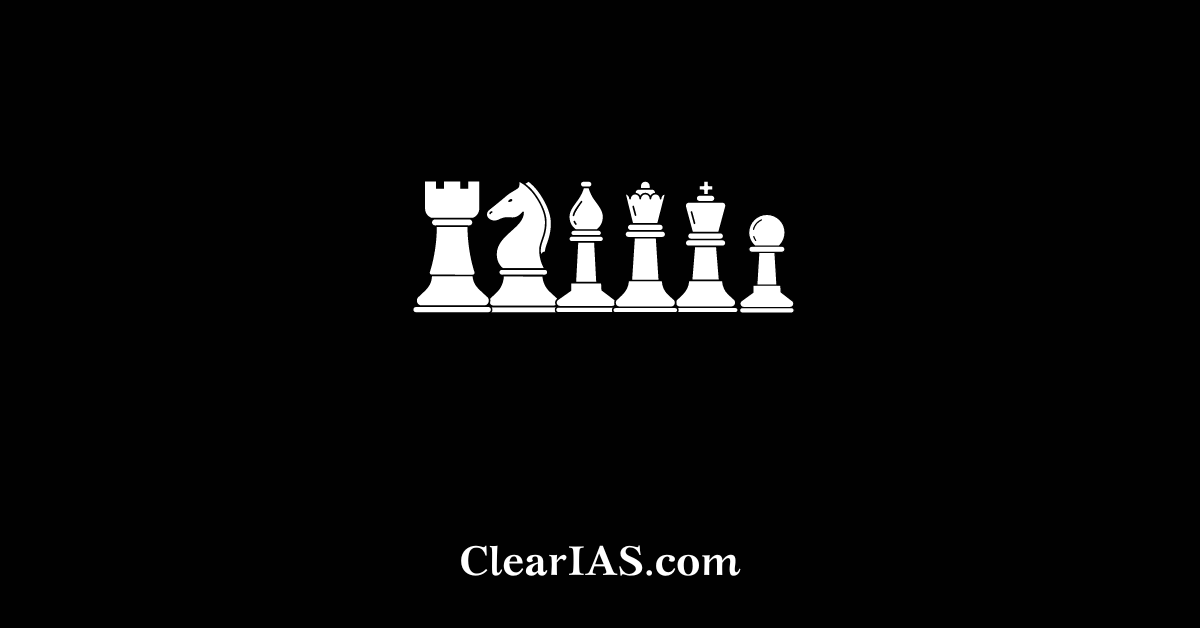 Chess is a board game for two players. It is sometimes called Western chess or international chess to distinguish it from related games such as xiangqi and shogi.

The current form of the game emerged in Spain and the rest of Southern Europe during the second half of the 15th century after evolving from chaturanga, a similar but much older game of Indian origin.

Today, chess is one of the world’s most popular games, played by millions of people worldwide.

Chess is an abstract strategy game and involves no hidden information. It is played on a square chessboard with 64 squares arranged in an eight-by-eight grid.

At the start, each player (one controlling the white pieces, the other controlling the black pieces) controls sixteen pieces: one king, one queen, two rooks, two bishops, two knights, and eight pawns.

The object of the game is to checkmate the opponent’s king, whereby the king is under immediate attack (in “check”) and there is no way for it to escape. There are also several ways a game can end in a draw.

Contemporary chess is an organized sport with structured international and national leagues, tournaments, and congresses. Thousands of chess tournaments, matches, and festivals are held around the world every year catering to players of all levels.

Tournaments with a small number of players may use the round-robin format, in which every player plays one game against every other player.

For a large number of players, the Swiss system may be used, in which each player is paired against an opponent who has the same (or as similar as possible) score in each round.

The term “match” refers not to an individual game, but to either a series of games between two players, or a team competition in which each player of one team plays one game against a player of the other team.

FIDE is recognized as a sports governing body by the International Olympic Committee, but chess has never been part of the Olympic Games.

An early objective of computer scientists was to develop a chess-playing machine. In 1997, Deep Blue defeated Garry Kasparov to become the first computer to overcome the reigning World Champion. Modern chess engines are much stronger than the top human players and have had a profound impact on the evolution of chess theory.

It was founded on 26 March 1951 as a new appearance of the International Correspondence Chess Association (ICCA), which was founded in 1945.

All India Chess Federation (AICF) is the central administrative body for the game of chess in India. Founded in 1951.

The AICF has produced Viswanathan Anand, Nihal Sarin, Pentala Harikrishna, Rameshbabu Praggnanandhaa and Vidit Santosh Gujrathi and many other grandmasters.

The organisation is also in charge of managing women’s chess in India. AICF’s current headquarter is in New Delhi.

FIDE’s most visible activity is organizing the World Chess Championship, a role it assumed in 1948. The current World Champion is Magnus Carlsen of Norway. The reigning Women’s World Champion is Ju Wenjun from China.

Viswanathan Anand tops the Indian ranking with a rating of 2756 followed by Gukesh D with a 2726 rating.

The World Chess Solving Championship and World Correspondence Chess Championships include both team and individual events; these are held independently of FIDE.

An average club player has a rating of about 1500; the highest FIDE rating of all time, 2882, was achieved by Magnus Carlsen on the March 2014 FIDE rating list.

All the titles, including that of Grandmaster, are valid for life unless a player is stripped of the title for a proven offence such as cheating.

The above titles are open to both men and women. There are also separate women-only titles

FIDE also awards titles to arbiters and trainers. International titles are also awarded to composers and solvers of chess problems and to correspondence chess players.

One of the most effective strategies to improve in chess is to familiarise yourself with the terminology used by chess players.

Even though the Rook is not a “castle” and the Knight is not a “horse,” National Master Dan Heisman has assembled numerous useful definitions for the beginning chess player.

Action Chess is a game in which each player has only 30 minutes to make every move.

Using the names of the pieces and their ranks and files, Algebraic Notation is a way of recording movements. In 1970, the former descriptive notation (“P-K4” is now “e4”) was replaced.

When you move a piece to a square where you may capture an opponent’s piece on your NEXT turn, you attack.

We conclude that Chess is similar to a brain tonic in that it improves concentration, patience, and perseverance while also developing creativity, intuition, memory, and, most importantly, the ability to process and extract information from a set of general principles, learning to make difficult decisions and solve problems flexibly.