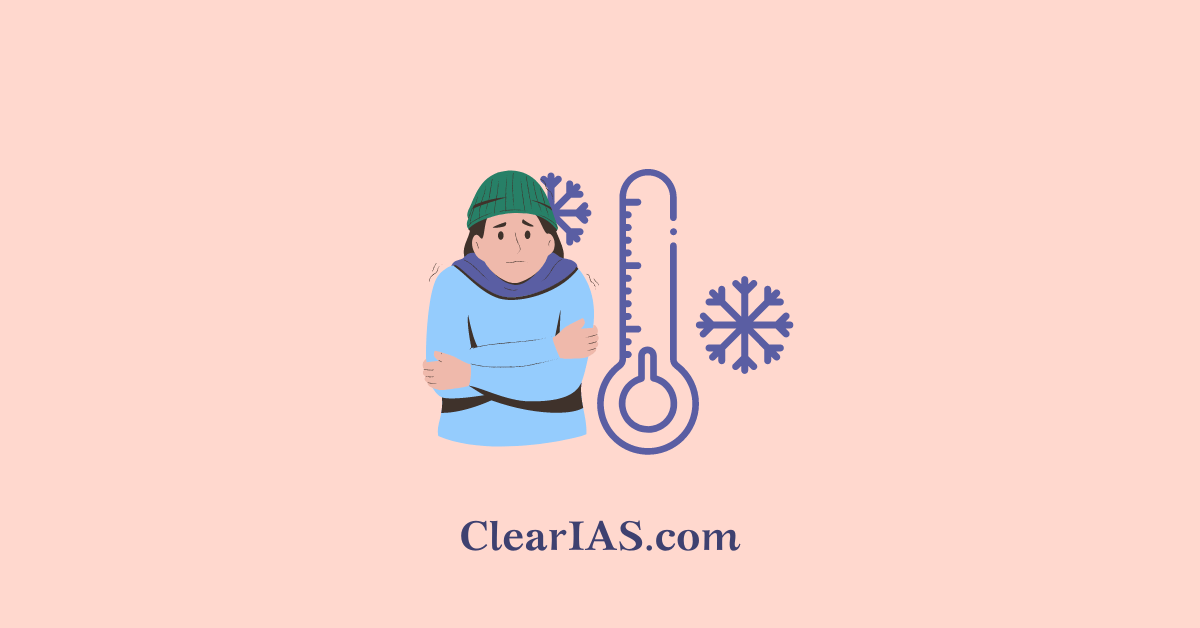 What are Coldwaves and what are its impacts?What are the major factors leading to cold waves in India? Read further to know more.

Delhi typically experiences cold spells in December and January. Over the past decade, the number of cold wave days in January has ranged from none to seven.

The coldwave conditions denote a certain percentage fall in temperature from the normal climatological value at a particular location. Cold wave (CW) conditions generally occur in India during the months of November to March.

During this period, the health of people is severely impacted. Particularly, poor people’s health conditions are negatively impacted, and in the worst circumstances, it can even result in serious casualties.

A cold wave is a localized seasonal phenomenon prevalent in the country except in southern India. The northern parts of India, especially the hilly regions of Jammu and Kashmir, Himachal Pradesh, Uttarakhand, and the adjoining plains are influenced by transient disturbances in the mid-latitude westerlies which often have weak frontal characteristics.

As per the India Meteorological Department’s criteria, Cold Wave and Cold Day conditions are defined as:

Based on Actual Minimum Temperature (For plain stations only)

(b) Cold Day: It should be considered when the minimum temperature is 10 degrees C or less for plains and 0°C or less for hilly regions.

The northern regions of the country, the Himalayas, and the western desert regions are particularly prone to cold waves. In the current climate change regime, these weather-related events (like cold waves) are further aggravated. According to IMD, India’s ‘Core Cold Wave Zone’ covers 17 States/UTs. With a total population of 90.90 crores residing in these 17 states/UTs are falling under the Core Cold wave Zone.

The Major Factors for Cold Wave Occurrence over India

Usually, the condition of coldwave in India occurs for the following reasons:

Major Factors Contributing to Colder than Normal Temperatures Over North India are:

Wind and Moisture Content: Large parts of the Indo gangetic plains have been covered in a layer of fog due to light wind and high moisture levels near to the land’s surface.

Large-scale Fog Cover: Long-lasting fog interferes with the balance of radiation by blocking sunlight from reaching the surface.

Westerly: westerly and northwesterly winds of around 5 to 10 km/h in the afternoon have also been contributing to the dip in temperature.

Coldwave have historically been referred to as “cold weather” and are recognized as seasonal changes in India. Coldwaves were considered a local disaster that received the fewest number of disaster preparedness or mitigation attention because they occur occasionally, only in certain regions of the country.

Agriculture: Cold wave and frost is a major factor that influences crop, horticultural plantations/orchard growth, and productivity and has a significant impact on agriculture. As a result, the livelihood of people gets adversely affected.

Livestock: A cold wave can also cause death and injury to livestock. Similarly, wildlife also experiences challenges during winter for both shelter and food.

Human Health: Cold waves have significant effects on health. It can cause severe lung-related problems like wheezing, coughing, and shortness of breath and are fatal to asthma and bronchitis. It can also cause eye irritation and infection. In India, cold waves have caused 4,712 deaths from 2001 to 2019 across various states.

Multi-Dimensional Approach: To deal with governance issues related to Disaster Risk Management for cold waves, there is a need for a multi-sectoral and multi-dimensional administrative approach.

Improvement in Health Sector: In the health sector, interventions can be introduced to address cold wave impacts.

Early Warning System and Public Awareness: Early warnings are a major element of disaster risk reduction and help in minimizing the loss of lives and economic impacts. An effective early warning system helps the communities at risk by generating public awareness, effectively disseminating warnings, and ensuring there is a constant state of preparedness.

National Level Plan: As there were no guidelines and action plans on cold waves at the national level, it was a challenge for disaster managers to take standardized preventive, preparedness, and mitigation measures.

Preventive Measures: There is a need to prepare an action plan for the cold wave season as a concurrent disaster and take all possible timely actions for preventive, preparedness, and mitigation measures to reduce the impacts of the coldwaves.