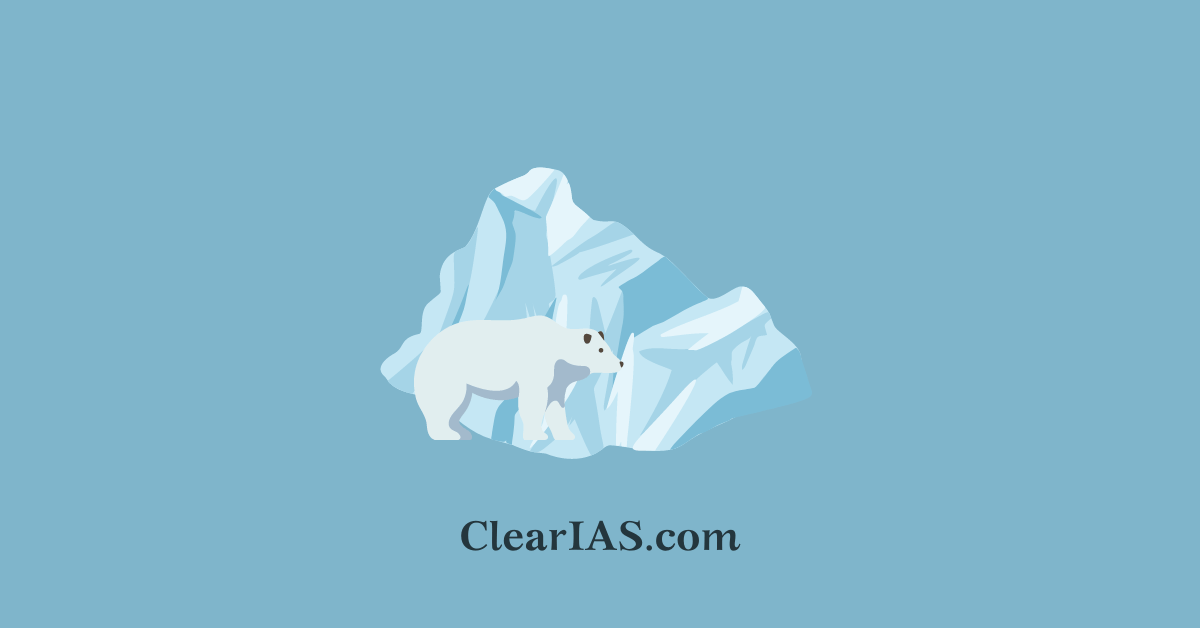 What do you understand by cryosphere? Why cryosphere is receding and what are the consequences of the loss of the cryosphere? Read the article to know all the important in-depth information.

The cryosphere comprises frozen parts of the earth such as glaciers, snow, and permafrost. Of the total freshwater found on earth, over 68 percent is locked up in ice and glaciers and another 30 percent of freshwater is in the ground.

The term “cryosphere” traces its origins to the Greek word ‘Kryos’ for frost or ice cold.

According to the latest World Meteorological Organisation’s (WMO) Provisional State of the Global Climate in 2022 report, the cryosphere is receding drastically.

Cryospheric regions are the least studied component of the earth system due to the paucity of observations, remoteness, extremely challenging field conditions, and limited time window in a year. The “Cryosphere and Climate” initiated by MoES during the 12th five-year plan have enhanced our understanding of the Antarctic cryosphere and climate variability.

According to the newly formed “Ambition on Melting Ice on Sea-level Rise and Mountain Water Resources” group, the melting of the cryosphere, or regions of the planet with frozen water, as a result of climate change, is a threat that will affect all countries, not just those in mountainous or polar regions.

As stated in the sixth assessment report of the Intergovernmental Panel on Climate Change, “Changes in the cryosphere will intensify with each additional increment of global warming and greenhouse gas emissions in the atmosphere.”

Submerge coastal areas with a rise in sea level that will threaten coastal communities, island nations, and low-lying regions with obliteration.

Elevate sea levels that can erase entire geographies off the world map, endanger marine and coastal ecosystems and cause immense economic losses.

The overall rise in surface temperatures triggers the retreat of subsurface ice, such as permafrost, and causes the release of previously trapped greenhouse gases, such as carbon dioxide and methane into the atmosphere.

The rise in temperature brought on by the increase in greenhouse gas emissions causes snow and ice to retreat even further.

Accelerate the events of seasonal floods due to the melting of snow and snow avalanches.

The temperature will increase further as Ice and snow both have a high albedo. They contribute to the cooling of the earth by reflecting the majority of light without being absorbed.

The global mean temperature is currently at 1.15 degrees Celcius above pre-industrial (1850-1900) levels.

Glaciers in the European Alps shrank between three and over four meters, breaking previous records.

Switzerland lost 6 percent of the glacier ice volume from 2021-2022, according to the Provisional State of the Global Climate in 2022 report by the World Meteorological Organization (WMO).

How to Manage the Loss of Cryosphere?

The best solution to avoid the crisis is limiting global warming to 1.5 degrees Celsius. But the global temperature is already 1.15°C above pre-industrial (1850-1900) levels.

The only way to arrest warming is an urgent and rapid reduction in global carbon dioxide and other greenhouse gas emissions from every sector.

The need to make pre-2030 emissions reductions a matter of urgency is imperative for the benefit of all our societies.

The objectives of the program are:

The foundation of the Indian Arctic endeavors was laid in 2007. India is one of the most recent countries to commence Arctic research as it established its Arctic research station (named ‘Himadri’) in 2008.

The objectives of this program are:

All the scientific and logistic programs in multiple polar domains were amalgamated as a Central Sector umbrella scheme named “Polar Science and Cryosphere Research (PACER)”.

The major objectives of the scheme are:

Other flagship schemes are:

Target Beneficiaries of the program are Fishermen, the offshore industry, the navy, the coast guard, and the coastal & island states.

The objective of Atmospheric and Climate Research, Observations Science Services (ACROSS) are:

The objective of Seismology and Geoscience Research (SAGE) are:

The cryosphere needs to be protected through vigorous climate action, as this is not only a problem for mountain and polar countries; it is a worldwide issue that needs to be addressed immediately.