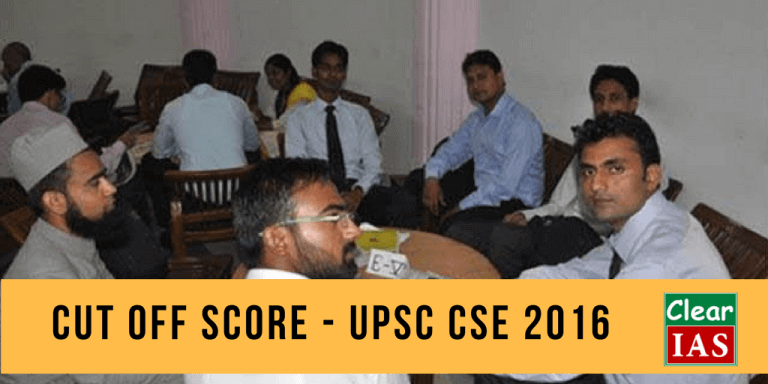 Marks for UPSC CSE Prelims that would have fetched a mains call is as below. (Marks out of 200). A General Category candidate should have scored 116 marks out of 200 in GS Paper 1 (58%) to get selection into the Main Exam (written) in 2016. UPSC 2016 Cut off score given in ‘bold’ for different categories is compared against last year cut-off score.

Note: In addition to the minimum qualifying marks stated above for GS Paper 1 (marks out of 200), the candidate has to score above 33% marks for GS Paper 2.

PS: It is interesting to note here that ClearIAS Prelims Test Series 2016 and study materials alone could have contributed more than 100 marks for our regular followers in 2016 Prelims.

Marks for UPSC CSE Mains that would have fetched an interview call is as below. (Marks out of 1750). A General Category candidate should have scored 787 marks out of 1750 for the seven papers in the Main Exam (written) to get selection into the Interview (Personality Test) in 2016 (44.97%). UPSC 2016 Cut off score given in ‘bold’ for different categories is compared against last year cut-off score.

Marks needed to be included in the final rank list for UPSC CSE 2016 is as below (Marks out of 2025). A General Category candidate should have scored 988 marks out of 2025 (48.79%) for the seven papers in the Main Exam (written) plus Interview (Personality Test) in 2017 to get selection in the final rank list. UPSC 2016 Cut off score given in ‘bold’ for different categories is compared against last year cut-off score.

In the case of UPSC evaluation, there are no good or bad marks – but only relative performance. When the valuation is tight (as it was the case in 2013), the scores were very low. But in 2016, there is a huge jump in the marks – which can be attributed to two reasons – (1) liberal valuation (2) better preparation by candidates due to the right guidance and study materials by online coaching initiatives like clearias.com.

UPSC has released the Marks for UPSC CSE Prelims that would have fetched an IFoS Mains call. 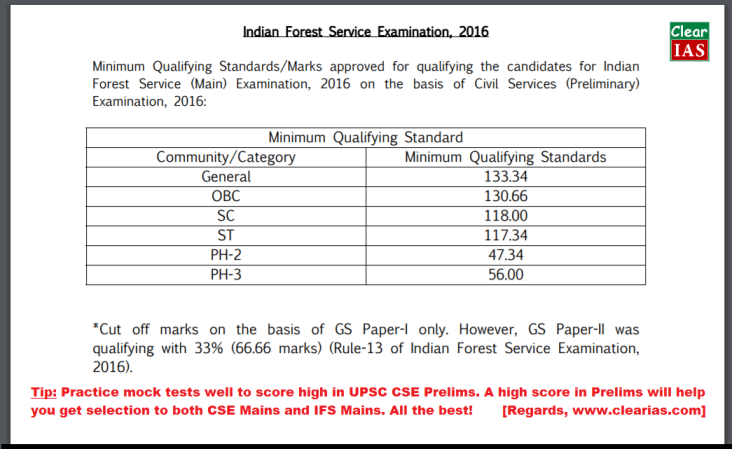 How can you know the Mains Marks (Individual Subjects) and Interview Marks?

UPSC Civil Services Exam 2016 Marks of all candidates who wrote Mains or attended Interview is now available on the UPSC website. Link – https://upscdaf.nic.in/daf/marksheet_system/.

Aspirants can share your marks in our comments section to get insights about the trend of UPSC marks this year.