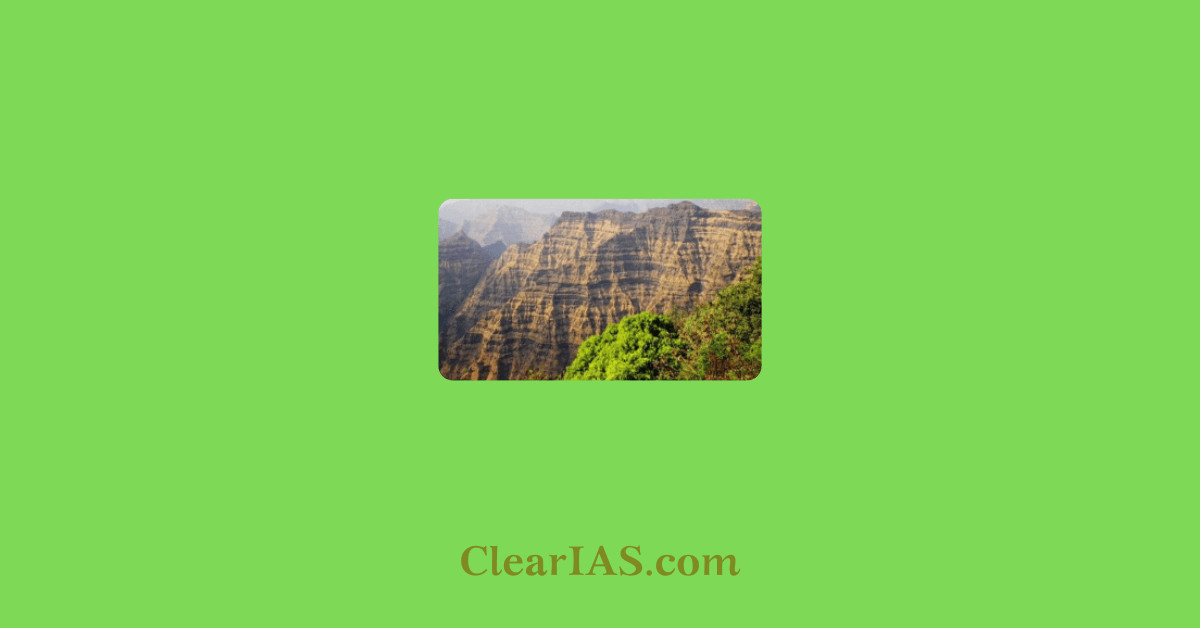 The geography of India is extremely diverse, with landscapes ranging from snow-capped mountain ranges to deserts, plains, hills and plateaus. In the southern part of Peninsular India, there is a flood basalt province named the Deccan traps. Read more about the Deccan traps here.

The name Deccan is derived from the Sanskrit word ‘dâkshin’, meaning “south.”

The west-central parts of the Indian peninsula are dominated by flood basalts which form a prominent terraced landscape.

What are Deccan Traps?

A thick succession of (3200 metres) late Cretaceous basaltic lava flows known as the Deccan Traps covers around 500 000 square kilometres of peninsular India. This basaltic lava soil has gradually eroded due to erosion, resulting in the formation of a Deccan trap.

The Deccan Traps is an area of black dirt on the Peninsular Plateau. The rocks are igneous and have volcanic origins. Black dirt has been produced as a result of the erosion of these rocks over time.

The majority of these volcanic rocks are found in Gujarat’s Kutch and Kathiawar regions, as well as in Andhra Pradesh, Madhya Pradesh, and Maharashtra.

Its thickness varies depending on whether the surface is flat or sloppy, being midway between deep and shallow.

These (the Deccan Traps) might be considered Peninsular India’s most widespread geological formations after the Archean Rocks. 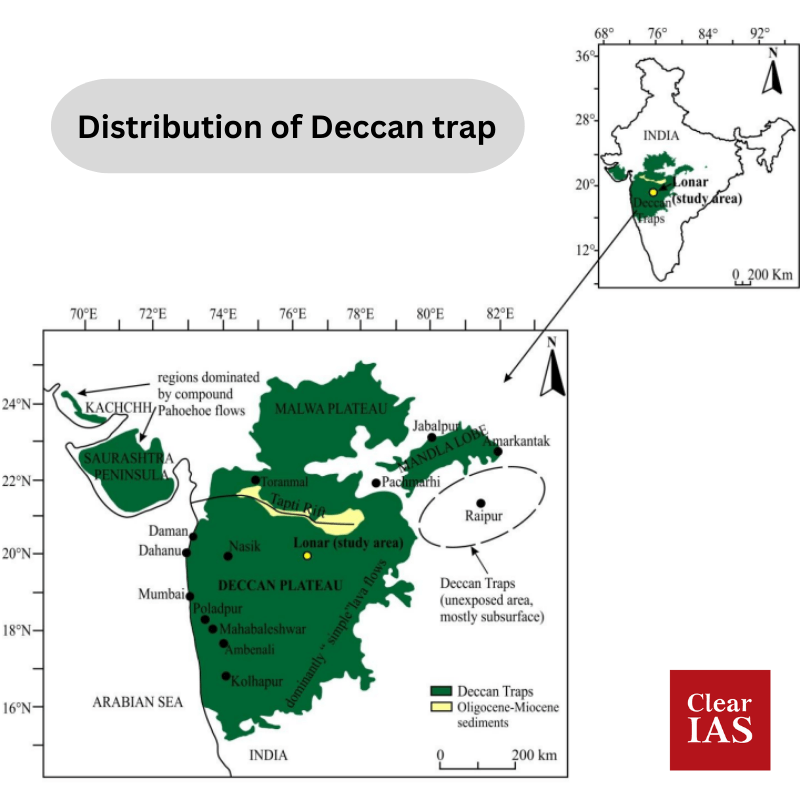 How are Deccan traps formed?

Cretaceous vulcanicity, the development of many linear cracks in the earth’s crust, is what causes the formation of decan traps. This eruption did not produce any volcanic domes since it was of the quiet kind.

This incident started 66.25 million years ago (End of the Cretaceous period) when India was near present placed Madagascar and during its movement north, it passed over Reunion Hotspot. Presently this hotspot is dormant in nature.

From a general study of the Deccan Traps, the following broad conclusions can be drawn about their mode of eruption:

(a) They erupted in a sub-aerial environment. Their relationship with the older rocks suggests this.

(b) Eruptions of the lava took place along linear fissures, forming fissure-type of eruptions and not from any central cone-type volcanoes. This is explained by numerous flows and their remarkably consistent horizontal attitude.

(c) The lava when erupted was in a highly liquid form, which is indicated by the long distances over which the individual flows could spread. This fact also suggests that the lava might have been super-heated to reach that state of mobility.

(d) A large number of dykes that have been found occurring intersecting many lava flows might be quite younger than those flows, but some such dykes might have also been the feeder dykes for the volcanic eruptions.

(e) The lava flows, especially after the beginning and before the close of the activity, passed through definite periods of no volcanic activity. During such periods streams and lakes appeared on the cooled and congealed volcanic landforms here and there and both animal and plant life domiciled these areas. This is indicated by the occurrence of inter-trappean layers found in the lower and upper flows and their fossil contents.

The most significant rock in the Deccan Trap is augite-basalt basalt, which has a greyish-green colour. Vesicular and amygdaloidal textures are frequently seen. There have also been discoveries of intrusions formed by basic volcanic rocks like gabbro and limburgite as well as acidic volcanic rocks like rhyolites and granophyres in places like Kutch and Bombay.

Trap basalts are shown by microscopic investigation to be fine-grained basalts that are surprisingly devoid of olivine. While calcite, quartz, glauconite, etc. are some of the typical accessory minerals that frequently fill the voids in the original basalts, augite and felspars are the principal ingredients.

The Traps have been classified into three groups namely, Upper Traps, Middle Traps and Lower Traps.

In the lower and upper divisions of the Traps, fossilised remains of several animals and plants have been discovered in the inter-trappean deposits.

The primary constituents of the Inter-Trappean beds include eroded volcanic debris, clay, impure limestones, and other related materials. Many locations in Gujarat, Madhya Pradesh, and Maharashtra have investigated these beds.

The inter-trappean beds, which are composed of dark-shaded shales, may be found in fine arts in the Malabar Hills of Bombay.

Cerithium, Potamides, Hydraspis, Rana, and Paudina, all of which are freshwater or estuary environment species, are among the fossils produced by Inter-trappean deposits. From Deccan Traps, no marine life fossils have been found.

On the precise geological age of the Deccan Traps, there is still no widespread consensus. There have been two potential placements.

The Deccan Traps should be compared to the Danian Stage of the Upper Cretaceous based on stratigraphic data. The second theory, which mostly relies on fossil data, contends that a Lower Eocene age is more acceptable.

The discovery of certain typical fish and palm fossils from the Tertiary system lends weight to this. However, it can be generally concluded that the activity that led to the deposition of the Deccan Traps began somewhere in the Upper Cretaceous and continued through the era change right up until and even into the Lower Eocene period of Tertiary times, given the enormous thickness of the Traps (more than 2000 m at some locations).

Black Soil, commonly referred to as “Regur Soil,” is dark soil. It is also known as “cotton soil” since it is ideal for producing cotton.

These lava flow-derived soils, which cover the north-western Deccan plateau and are most typical of the Deccan trap (Basalt) area, are widespread.

Black soil is thought to have formed as a result of a combination of environmental causes and parent rock composition.

Particularly in the locations where basalt is present, black soil grows in semi-arid environments. They extend eastward in the south along the Godavari River and Krishna River Valleys, covering the plateaus of Maharashtra, Saurashtra, Malwa, and southern Madhya Pradesh.

The districts of Surat and Bharuch, as well as the Narmada Valley and Tapti Valley, all produce black soil.
The soil in these areas has essentially little humus, and the black colour of the soil is caused by the presence of certain salts. Black soils are often thin, deficient, and sandy in the mountainous portion of the nation.

Black soils are very sensitive. Due to their high clay content, black soils become sticky when wet and are therefore challenging to plough. They have a reputation for holding onto moisture. In the field, the heat causes thick cracks to form. This aids in their ventilation, which accounts for their dominance in self-ploughing. After the initial or pre-monsoon rainfall, this soil becomes sticky and impossible to work unless it is immediately tilled.

Lime is abundant in black soils and Regur soils. In nature, it is rich soil made up of a combination of sand, clay, and organic components. Additionally, this soil is quite productive and moisture-retentive, especially on the plains and in river valleys where it is deep and clayey.

Additionally, they are rich in soil nutrients including potash, calcium carbonate, and magnesium carbonate. However, the Black or Regur soil does not contain enough nitrogen, which is thought to be important for plant development.

The soil in the Deccan Trap is nearly devoid of humus and exhibits a dark black hue as a result of the presence of titanium salt. They contain a lot of lime.

The lowlands and river valleys, where the soil is deep and clayey, as well as the slopes and high hills, have exceptionally fertile soil that retains moisture well. These soils are often poor, thin, and sandy. These soils are deficient in phosphorus, potassium, and nitrogen, all of which are crucial for the establishment of dense plants and grain crops, respectively.