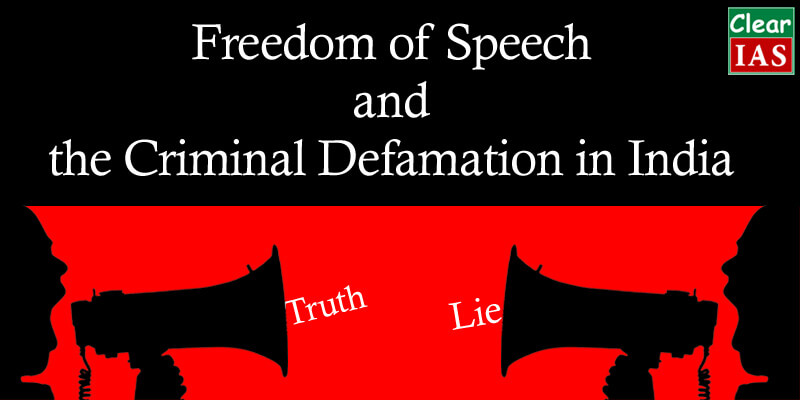 Criminal defamation is in news recently for multiple reasons. Questions have been raised on whether defamation should be treated as a civil wrong or criminal offence or both. It is argued that criminalizing defamation has a harsh effect on the right to freedom of speech and expression provided under article 19. There are many demands to make defamation only as a civil wrong.

However, the Supreme Court’s recent judgment upholding Sections 499 and 500 of the IPC as constitutionally valid has received wide attention, including visible, vibrant, sometimes even vicious criticism. In this article, we analyse the ‘Criminal Defamation’ in India. We will also discuss the way forward.

What is the difference between a civil wrong and criminal offence?

Arguments for why IPC 499/500 should be declared unconstitutional

Arguments for why IPC 499/500 is not unconstitutional

Why should it remain a criminal offence and not made a civil offence? What is the view of the Supreme Court on defamation?

What can be the way ahead?

Criminal defamation should not be allowed to be an instrument in the hands of the state, especially when the Code of Criminal Procedure gives public servants an unfair advantage by allowing the state’s prosecutors to stand in for them when they claim to have been defamed by the media or political opponents.

In recognition of the fact that many countries do have criminal defamation laws which are unlikely to be repealed in the very near future, following interim measures can be taken:

(Qn for UPSC Mains) Criminal defamation is considered as a restriction on the right to freedom of speech and expression. Critically examine if this should be made a civil offence? What are the implications of this debate?

(Note: You may also read on the other contrasting case connecting freedom of speech. ie Sedition in India: Section 124A of IPC vs Freedom of Speech)