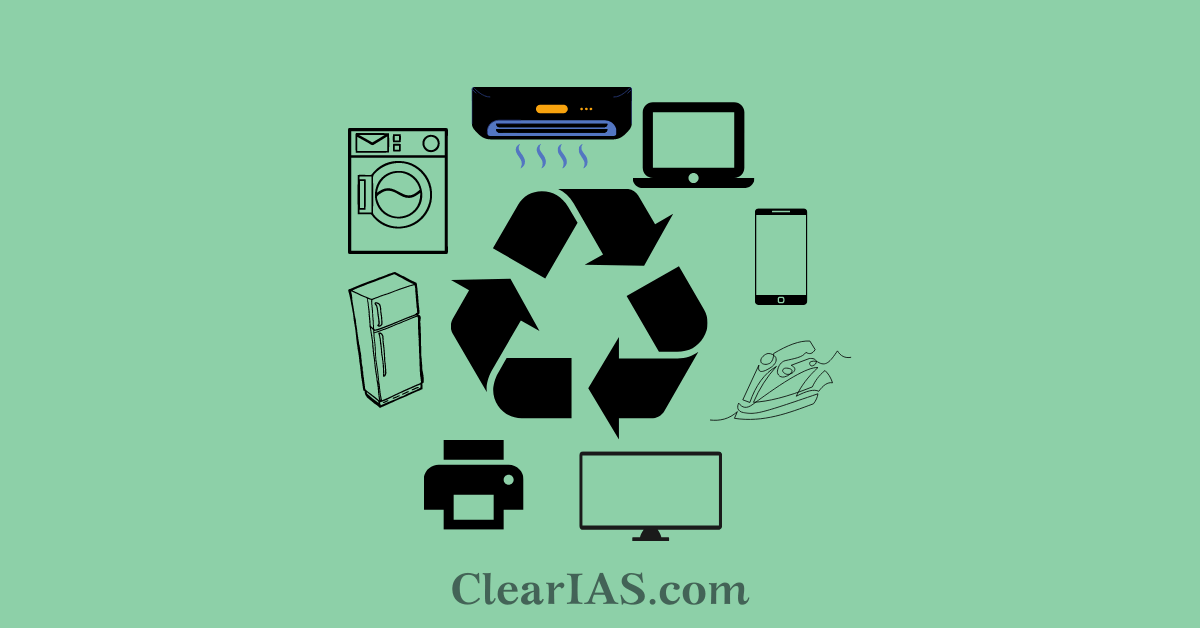 What is e-waste? What are the concerns associated with it? How do we dispose of it? What are reuse and recycle? Are there any rules in place? Read to know more here.

E-waste or Electronic waste is any electrical or electronic equipment that’s been discarded. This includes working and broken items that are thrown in the garbage or donated to a charity reseller, their components, consumables, parts, and spares.

E-waste is particularly dangerous due to toxic chemicals that naturally leach from the metals inside when buried.

It is divided into 21 types under two broad categories:

Today, a growing amount of e-waste is not considered only to be products that have stopped working or become obsolete.

Technology is advancing at such a fast pace that a lot of electronic devices that still work fine are the ones considered obsolete. The updated versions of the devices replace the older ones which then become e-waste.

Electronics contain toxic substances – therefore they must be handled with care when no longer wanted or needed.

The consequences of improper e-waste disposal in landfills or other non-dumping sites pose serious threats to current public health and can pollute ecosystems for generations to come. When electronics are improperly disposed of and end up in landfills, toxic chemicals are released, impacting the earth’s air, soil, water, and ultimately, human health.

Contamination in the air occurs when e-waste is informally disposed of by dismantling, shredding, or melting the materials, releasing dust particles or toxins, such as dioxins, into the environment that cause air pollution and damage respiratory health.

Chronic diseases and cancers are at a higher risk to occur when burning e-waste because it also releases fine particles, which can travel thousands of miles, creating numerous negative health risks to humans and animals.

The negative effects on air from informal e-waste recycling are most dangerous for those who handle this waste, but the pollution can extend thousands of miles away from recycling sites

The air pollution caused by e-waste impacts some animal species more than others, which may be endangering these species and the biodiversity of certain regions that are chronically polluted. Over time, air pollution can hurt water quality, soil, and plant species, creating irreversible damage to ecosystems.

When the improper disposal of e-waste in regular landfills or in places where it is dumped illegally, both heavy metals and flame retardants can seep directly from the e-waste into the soil, causing contamination of underlying groundwater or contamination of crops that may be planted nearby or in the area in the future. When the soil is contaminated by heavy metals, the crops become vulnerable to absorbing these toxins, which can cause many illnesses and doesn’t allow the farmland to be as productive as possible.

After soil contamination, heavy metals from e-waste, such as mercury, lithium, lead, and barium, then leak through the earth even further to reach groundwater.

When these heavy metals reach groundwater, they eventually make their way into ponds, streams, rivers, and lakes. Through these pathways, acidification and toxicity are created in the water, which is unsafe for animals, plants, and communities even if they are miles away from a recycling site. Clean drinking water becomes problematic to find.

Acidification can kill marine and freshwater organisms, disturb biodiversity, and harm ecosystems. If acidification is present in water supplies, it can damage ecosystems.

The negative health effects of these toxins on humans include brain, heart, liver, kidney, and skeletal system damage. It can also considerably affect the nervous and reproductive systems of the human body, leading to disease and birth defects.

Improper disposal of e-waste is unbelievably dangerous to the global environment, which is why it is so important to spread awareness on this growing problem and the threatening aftermath.

To avoid these toxic effects of e-waste, it is crucial to properly re-cycle, so that items can be recycled, refurbished, resold, or reused.

E-waste and the 2030 Agenda for Sustainable Development

The environment is an integral part of each of the goals, with e-waste specifically linking to a number of these targets. Increasing levels of e-waste globally pose challenges for the implementation of the 2030 Agenda for Sustainable Development.  Hence it requires an efficient approach and coordinated action by the UN system to support the countries in their efforts to manage their e-waste in a sustainable manner and to minimize the creation of e-waste.

SDG Target 3.9: By 2030, substantially reduce the number of deaths and illnesses from hazardous chemicals and air, water, and soil pollution and contamination.

SDG Target 8.8: Protect labor rights and promote safe and secure working environments for all workers, including migrant workers, in particular, women migrants, and those in precarious employment.

SDG Target 11.6: By 2030, reduce the adverse per capita environmental impact of cities, including by paying special attention to air quality and municipal and other waste management.

SDG Target 12.4: By 2020, achieve the environmentally sound management of chemicals and all wastes throughout their life cycle, in accordance with agreed international frameworks, and significantly reduce their release to air, water, and soil in order to minimize their adverse impacts on human health and the environment.

International Convention for Prevention of Pollution from Ships (MARPOL)

The Basel Convention aims to protect human health and the environment against the adverse effects resulting from the generation, management, transboundary movements, and disposal of hazardous and other wastes. Among key provisions of the Basel Convention are environmentally sound management, transboundary movement, waste minimization, and waste disposal practices aimed at mitigating adverse effects on human health and the environment.

The Nairobi Declaration and decision IX/6 was adopted by the 9th meeting of the conference of the parties to the Basel Convention in 2006 and gave a mandate to the secretariat of the Basel Convention to implement a work plan for the environment sound management of e-waste.

The Montreal Protocol is an international treaty that aims to protect the ozone layer by phasing out the production and use of ozone-depleting substances (ODS). ODS, chlorofluorocarbons (CFCs), and hydrochlorofluorocarbon (HCFCs) as refrigerants are still used in some refrigerators and air conditioners. Waste refrigerators and air conditioners will also likely contain CFCs or HCFCs.

Although not directly involved in e-waste, UNFCCC has been active as part of the e-waste from toxic to the green initiative. Through the initiative, waste pickers in India have been trained to collect electronic waste, such as computers and mobile phones, for safe disposal and recycling.

The Rotterdam Convention promotes shared responsibilities in relation to the international trade of certain hazardous chemicals in order to protect human health and the environment from potential harm. It also calls on exporters of hazardous chemicals to use proper labeling, to include directions on safe handling, and to inform purchasers of any known restrictions or bans.

But the e-waste dismantling capacity has not been increased from 7.82 lakh tonnes since 2017-18.

In 2018, the Ministry of Environment had told the tribunal that 95% of e-waste in India is recycled by the informal sector and scrap dealers unscientifically dispose of it by burning or dissolving it in acids.

E-waste management is a great challenge for governments of many developing countries such as India. This is becoming a huge public health issue and is exponentially increasing by the day.

To separately collect, effectively treat, and dispose of e-waste, as well as divert it from conventional landfills and open burning, it is essential to integrate the informal sector with the formal sector.

The competent authorities in developing countries need to establish mechanisms for handling and treatment of e-waste safely and sustainably.

More efforts are required on the improvement of the current practices such as collection schemes and management practices to reduce the illegal trade of e-waste.

Reducing the number of hazardous substances in e-products will also have a positive effect in dealing with the specific e-waste streams since it will support the prevention process.