ClearIAS » Current Affairs Notes » Ethanol Blending: What are the Benefits and Drawbacks 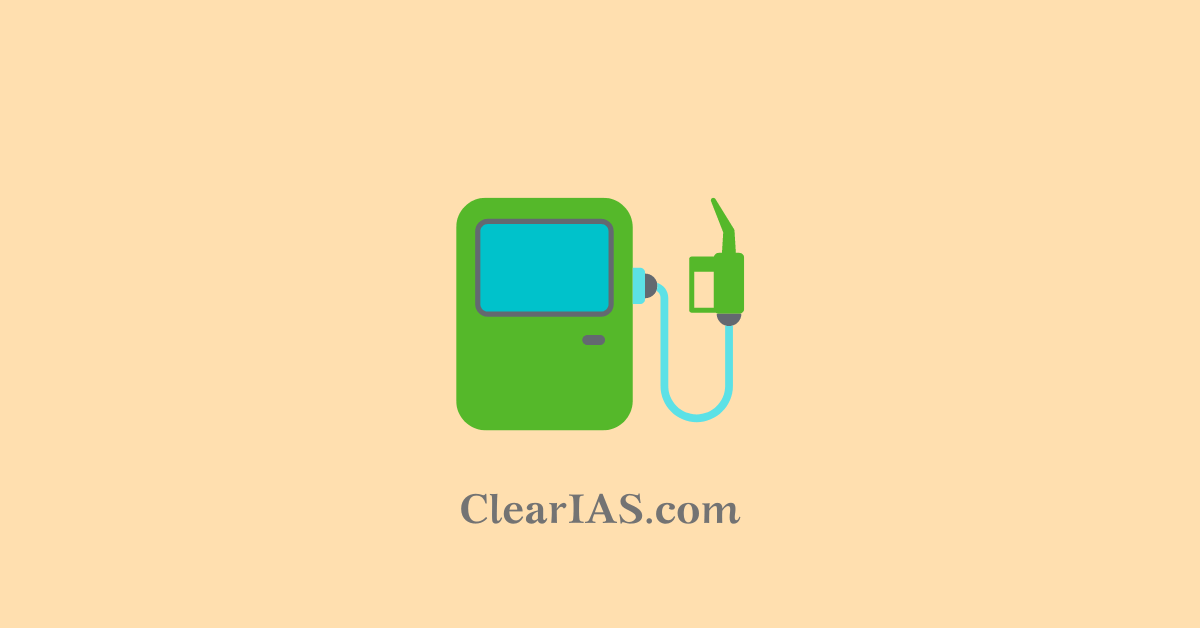 India has achieved its 10% sugarcane-extracted ethanol blending in petrol target, ahead of schedule.

There are several benefits and drawbacks related to ethanol blending. Check the in-depth details below.

What is Ethanol Blending?

Blending ethanol to a certain extent with petrol that makes it burn fewer fossil fuels while running vehicles is called ethanol blending.

The Department of Food and Public Distribution (DFPD) is the nodal agency for the promotion of fuel-grade ethanol-producing distilleries in the country.

In the current vehicle, ethanol added to petrol has no impact. Since ethanol contains oxygen, it aids in more complete combustion, lowers emissions, and improves the fuel’s environmental performance.

Ethanol is an agricultural byproduct, mainly obtained from the processing of sugar. It can also be obtained from other sources such as rice husk or maize.

By 2023, all vehicles will be E20 (20% ethanol in petrol) material compatible, as committed by the auto industry. Therefore, in order to carry or store fuel that contains 20% ethanol, the fuel points, plastics, rubber, steel, and other components in cars would need to be compatible.

India is one of the world’s biggest oil-importing nations.

NITI Aayog said that India’s net import of petroleum was 185 million tonnes at a cost of $55 billion in 2020-21 and a successful ethanol blending program can save $4 Billion per annum.

Ethanol blending will help bring down India’s share of oil imports (almost 85%) which saves a considerable amount of foreign exchange.

The requirement of ethanol as an output will help increase farmers’ income.

India’s aim is to increase the ethanol blending to the ratio of 20% originally by 2030 but NITI Aayog in advanced the deadline to 2025.

Opening new opportunities for farmers to raise their income. Here farmers can sell their products as well as gain extra income from residues as well.

Reduce environmental damages caused by fuel because of non-proper combustion and stop farmers from burning their stubble which means lesser air pollution and sell it for ethanol production.

Ethanol can be extracted from materials other than molasses such as rice straw, wheat straw, corn stover, corn cobs, bamboo, and woody biomass, which is known as second-generation ethanol sources or 2G. Thus, second-generation biofuels are produced from residual and waste products.

It is expected that the ethanol project will reduce greenhouse gases equivalent to about three lakh tonnes of CO2 emission per annum.

Using stubble of post-harvest for ethanol production reduces stubble-burning so as air pollution along with helping in increasing farmers’ income.

As the ethanol blending program run by various developed nations, global corn, and maize production is down, this may act as an incentive for India’s export.

Even after it reduces carbon dioxide by a significant amount, it does not reduce the emission of other key pollutants which as nitrous oxide.

The water required to grow crops for ethanol is a matter of debate. It is said that sugarcane is the cheapest source of ethanol. On average one tonne of sugarcane can effectively produce 70 liters of ethanol which requires 2,860 liters of water.

It may show some negative impact on food and fodder because of the diversion of resources for ethanol production.

Nearly a tenth of the current net sown area will need to be redirected for sugarcane production in order to reach a 20% mix rate that can create a food insecurity situation in the country.

In India, regulations are now in place for vehicle emissions including those of Carbon Monoxide (CO), Hydrocarbons (HC), and Nitrogen Oxides (NOx).

Utilizing ethanol-blend gasoline reduces these pollutants. E20 fuel led to even greater reductions in carbon monoxide emissions, which were 50% lower in two-wheelers and 30% lower in four-wheelers.

Compared to regular gasoline, ethanol blends have a 20% reduction in hydrocarbon emissions.

Though it does not show much effect on nitrous oxide, overall, blending ethanol with petrol can reduce emissions from both two- and four-wheeled vehicles.

Report of the Expert Committee

The report of the inter-ministerial meeting says that 20% ethanol blending is viable.

By blending 20% ethanol by 2025, the nation could experience significant benefits, including yearly savings of Rs 30,000 crore in foreign exchange, energy security, reduced carbon emissions, improved air quality, self-reliance, the use of broken-down foodgrains, an increase in farmer incomes, the creation of jobs, and more investment opportunities.

Though there is uncertainty about future production, India may find it easy to simultaneously strengthen the domestic food supply system, by maintaining the buffer stock and also may maintain an export market for grains, and diverting grains to ethanol production at the expected rate. If India decides to refocus on ethanol produced from waste, it has a great opportunity to become a global leader in sustainable biofuel policy. Since these wastes are currently routinely burned, which contributes to smog, doing so would have significant positive effects on both the climate and air quality.