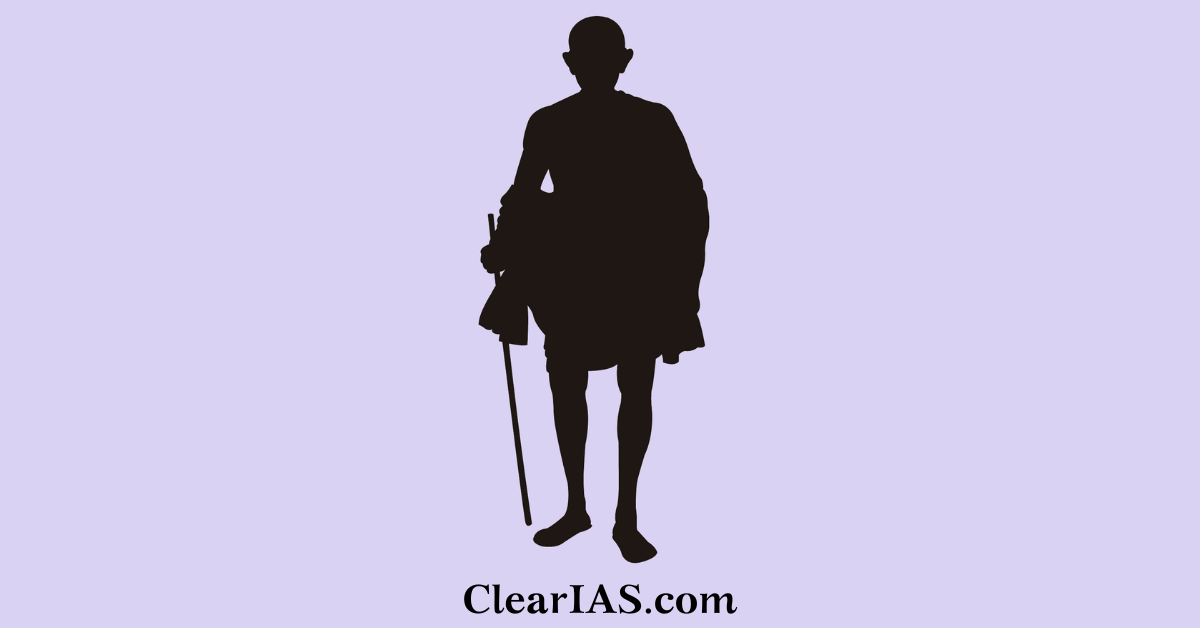 Mahatma Gandhi in India is considered the Father of the Nation. Gandhiji’s life was his lesson. Read to know more about Gandhian philosophies.

What made him special?

What were his views? What is the importance of Gandhian Philosophy? How it is relevant in modern times?

What is Gandhian philosophy?

Gandhian Philosophy is the religious and social ideas adopted and developed by Mahatma Gandhi.

The base of Gandhian philosophy is the spiritual or religious component. He was a firm believer in God.

He was also a believer in humanity.

He believed that human nature is good. He considered all people are capable of moral development.

Leo Tolstoy’s book ‘The Kingdom of God is within you” had a deep influence on Mahatma Gandhi. The same was the case with John Ruskin’s ‘Unto This Last’.

Gandhiji paraphrased Ruskin’s book ‘Unto This Last’ as ‘Sarvodaya’, which meant the upliftment of all.

The goal of Gandhi was to change society and each individual using the values of honesty and nonviolence.

These ideas have been further developed by many followers of Gandhi who proudly called themselves “Gandhians”.

These are generally considered to be the two key ingredients of Gandhian thought.

It is possible to pursue one without the other. Thus, seeking the truth can be done violently. Nations enter conflicts assuming they are on the side of truth or that the truth is on their side.

Those who are more sensitive and think the truth is on their side demand that a just war should be fought instead of one that is avoided at all costs.

The most sensitive were the pacifists among them. By avoiding violence altogether. But it could be argued that in doing so they have gone too far and abandoned truth, especially when interpreted as justice.

Even Mahatma Gandhi argued that although he was opposed to war, the two parties engaging in it may not stand on the same plane: the cause of one side could be more just than the other so that even a nonviolent person might wish to extend his or her moral support to one side rather than to the other.

It could be proposed that such a disjunction between the two runs the risk of cowardice being mistaken for, or masquerading as nonviolence.

The point becomes clear if we take the word “truth” to denote the “right” thing to do in a morally charged situation.

Gandhi’s opinion on the Non-violent Way

By using a non-violent approach, we aim to eliminate capitalism, not the capitalist. We encourage the investor to think of himself as a trustee for people who rely on him to create, hold onto, and grow his capital.

The worker is not required to wait for his conversion. Work is power if money is. Both are depending upon one another.

The moment the worker recognizes his potential, he is in a position to stop being the capitalist’s slave and start sharing in his success.

If he aims at becoming the sole owner, he will most likely be killing the goose that lays the golden eggs.

No need for me to worry that someone will replace me if I refuse to cooperate. Because I hope to persuade my co-workers to oppose my employer’s wrongdoing, This method of mass worker education is undoubtedly a slow one, but as it is also the most reliable, it must also be the fastest.

It is simple to show in the end that the worker is right and that no human being is so flawless as to merit his eliminating the person whom he mistakenly believes to be completely evil.

The concept was introduced in the early 20th century by Mahatma Gandhi and designated a determined but nonviolent resistance to evil.

The supreme idea of truth naturally leads to the Gandhian ideology of Satyagraha. Protecting the standards and tenets of truth is essential if it is the ultimate reality. God, who is the utmost truth and reality, requires a votary who is completely compassionate and unselfish.

Gandhi’s Satyagraha became a major tool in the Indian struggle against British imperialism and has since been adopted by protest groups in other countries.

The ancient Indian philosophy of ahimsa, or “non-injury,” which is rigorously practised by Jains, many of whom reside in Gujarat, where Gandhi was raised, is the inspiration behind Satyagraha.

Gandhi also drew inspiration from the works of Leo Tolstoy and Henry David Thoreau, the Bible, and the Bhagavad Gita, on which he produced a commentary, to modernize the notion of ahimsa and give it broad political implications as Satyagraha.

Gandhi first conceived Satyagraha in 1906 in response to a law discriminating against Asians that was passed by the British colonial government of the Transvaal in South Africa.

In 1917, the Champaran district, which produced indigo, hosted the first Satyagraha campaign in India. Fasting and economic boycotts were used as Satyagraha tactics in India over the ensuing years, up until the British left in 1947.

Since Satyagraha depends on the opponent, who is the embodiment of evil, upholding a high standard of ethical conduct, and demands an unreasonably high level of commitment from those working for social change, critics of the movement have asserted that it is unrealistic and incapable of achieving universal success.

These arguments have been made both during Gandhi’s lifetime and since.

However, Satyagraha left a lasting legacy in South Asia and was a key component of the civil rights movement headed by Martin Luther King Jr. in the United States.

The word “Sarvodaya” means “Universal Uplift” or “Progress of All.” The phrase was first used by Mohandas Gandhi to describe the aim of his political philosophy in his 1908 translation of “Unto This Last,” a work by John Ruskin on political economy.

Later Gandhians adopted the phrase as a moniker for the social movement in post-independence India that worked to ensure that self-determination and equality reached all strata of Indian society, including the Indian nonviolence leader Vinoba Bhave.

Objects of the Sarvodaya Movement

The Sarvodaya Movement has as its target the establishment of a whole network of such self-supporting village communities.

Family ties, which are currently restricted to blood groups, will be extended to include the entire village, erasing any disparities based on race, creed, caste, language, and other factors.

The planning of agriculture will ensure that there is enough food for everyone. Up until everyone in the hamlet has a job, the industry will operate on a cottage basis.

Village Council, a body that represents the entire village, will be responsible for determining the requirements of the community.

Principles of the Sarvodaya

The combination of two Sanskrit terms yields the English word “Swadeshi,” which has Sanskrit roots. Swa and desh both refer to one’s own or one’s nation.

Swadesh, therefore, refers to one’s homeland. The adjectival version of the word swadeshi, which means “of one’s own country,” can be loosely translated as “self-sufficiency” in most settings.

The message of the Charkha

Gandhiji asserts that the Charkha has the distinction of being able to address the issue of economic distress in a way that is most logical, straightforward, affordable, and professional.

It stands for both the wealth and freedom of the country. It represents commercial peace rather than commercial strife.

The spinning-meaning wheel is considerably bigger than its diameter. Simple life, helping others, living without hurting others, and forging an unbreakable tie between the wealthy and the poor, capital and labour, and the prince and the peasant are all part of its teachings. Naturally, the bigger lesson applies to everyone.

Trusteeship is a key component of Gandhian economics that could be called the nonviolent equivalent of ownership.

The idea was taken from English law by Gandhi. It denotes that one is a trustee rather than the owner of their belongings, including eventually their skills or abilities.

All must be used for the greater good of society, which includes one’s own welfare in the end. In this system, material possessions do not serve as status symbols that increase our sense of self-worth.

Trusteeship is a successful strategy for reducing excessive consumption. The economy might be rebalanced under trusteeship and put its focus back on pressing needs.

Gandhi believed that possessing more than one need necessarily entails robbing others of their requirements. There is enough on the earth to meet everyone’s needs, but not enough to satisfy everyone’s greed, he said.

The relevance of Gandhian Philosophy in Modern Times

Make in India is a manifestation of Gandhi’s ideals of self-sufficiency.

Gandhi’s philosophy of inclusive growth is fundamental to the building of a resurgent rural India.

He believed in “production by the masses” rather than in mass production, a distinctive feature of the industrial revolution.

Gandhi warned the country of unrestricted industrialism and exploitation of nature for human greed.

The results of not adhering to Gandhian environmentalism are serious environmental damage and non-sustainable development.

By emulating Gandhi’s values of non-violence and Satyagraha, internal matters such as insurgency issues in Kashmir, central India, or the North-Eastern states might be handled much better.

Even India’s foreign policy is founded on peaceful coexistence, and this is seen in the fact that India does not engage in aggression initially, even when security threats mount.

To conclude we can say that most of the teachings of Mahatma Gandhi hold relevance even in today’s world.

Seven Social Sins by Mahatma Gandhi were first published in his newspaper Young India in 1925. Those are a comprehensive list of behaviours that cause serious harm to society.