Geomagnetism deals with all aspects of the Earth’s magnetic field, also called the geomagnetic field, that surrounds our habitat in the form of the magnetosphere.

We cannot sense the geomagnetic field in any way, and instrumental measurements such as continuous recordings or dedicated surveys are necessary to study it.

Indian scientists have developed an Overhauser Magnetometer, one of the most accurate magnetometers extensively used by all magnetic observatories around the world.

OVH magnetometers are known for their higher accuracy, higher sensitivity, and efficient power consumption and hence find applications in all magnetic observatories worldwide as well as in international space programs.

It has so far been imported for such purposes in India.

To reduce dependence on imports, the Indian Institute of Geomagnetism (IIG), an autonomous research institution under DST, Government of India, has developed the magnetometer as part of its technology development program.

Experiments with the sensor installed at the Alibag Magnetic Observatory (MO) for geomagnetic sampling found that the sensor reproduced the geomagnetic diurnal variations accurately and precisely showed the signatures of various space weather events such as geomagnetic storms, impulses, etc.

The performance of this indigenously made magnetometer is at par with a commercial OVH sensor that is currently installed at the magnetic observatories of IIG.

Future applications of the OVH magnetometer:

Geomagnetism is the study of the magnetic field of the Earth.

It originated in ancient China and Greece, where the properties of the natural magnet (lodestone) were recognized for the first time.

The geomagnetic field acts both as an umbrella, shielding us from cosmic radiation, and as a window, offering one of the few glimpses of the inner workings of the Earth.

The magnetosphere (zone in which we can feel the magnetic effect) extends to about 60,000 km over the earth’s surface.

During particularly strong space weather events such as high solar winds or large CMEs, Earth’s magnetic field is disturbed and geomagnetic storms can penetrate the magnetosphere and lead to widespread radio and power blackouts as well as endangering astronauts and Earth-orbiting satellites.

Geomagnetism provided a very useful tool for recovering past plate motions through the analysis of oceanic magnetic anomalies.

It is known that Earth’s magnetic field has shifted and reversed over time. Because of how slowly it has generally wandered like only 9 km each year, hence scientists can readily keep track of its location.

However, after the turn of the century, this speed climbed to 50 kilometers each year.

Earth’s steady magnetic field is produced by many sources, both above and below the planet’s surface. 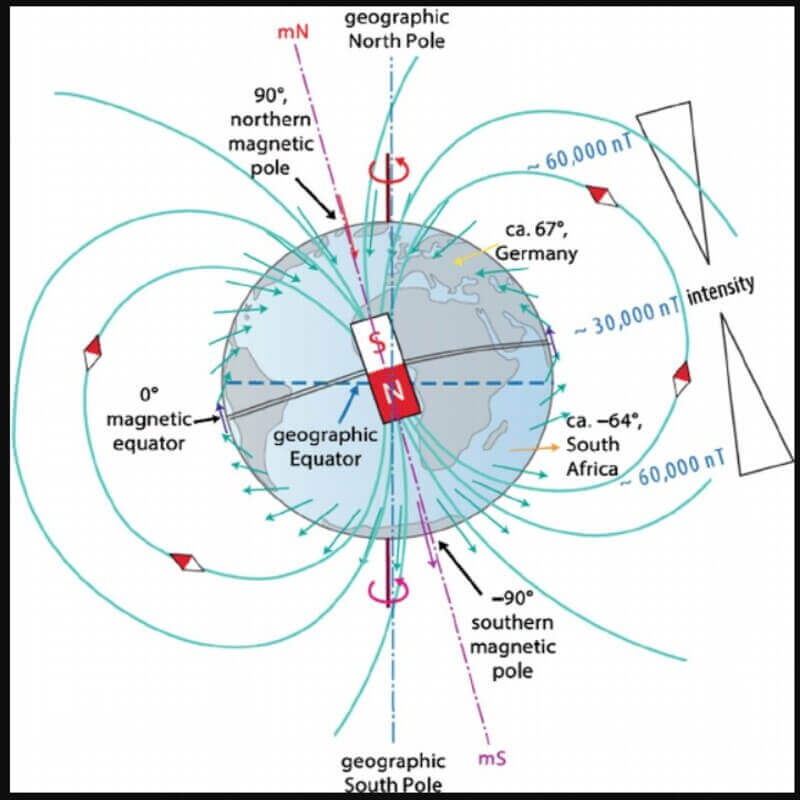 Earth has two sets of poles, geographic poles, and magnetic poles. Earth’s magnetic field can be visualized if you imagine a large bar magnet inside our planet, roughly aligned with Earth’s axis.

When a magnet is suspended so it may rotate freely, its North pole is imagined to be the pole that is drawn to the Earth’s North Magnetic Pole.

The intersections of the Earth’s surface and the axis of a bar magnet that is hypothetically positioned at the planet’s center are known as the geomagnetic poles (dipole poles).

The generation of Earth’s magnetic field occurs deep within the Earth’s interior, in a layer known as the outer core to be precise.

Geomagnetism on other planets

Earth is not the only planet in the solar system to possess a magnetic field.

Though the underlying mechanisms driving these magnetic fields are not yet completely understood.

Mars does not have enough inner heat nor does it possess the liquid interior required to generate a magnetic field.

Venus, on the other hand, has a liquid core but does not spin fast enough to generate a magnetic field.