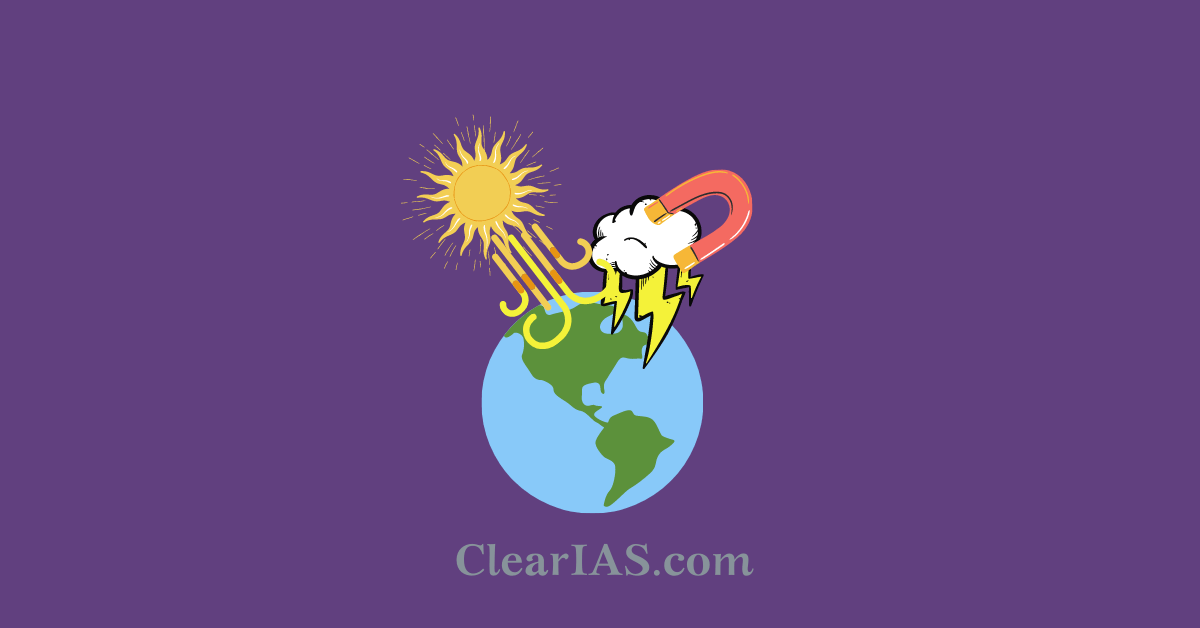 Geomagnetic storms are frequently in news and are an interesting phenomenon to study. Read here to know more.

What is a geomagnetic storm?

A geomagnetic storm is a major disturbance of Earth’s magnetosphere that occurs when there is an exchange of energy from the solar wind into the space environment surrounding Earth.

Solar storms are caused by the release of magnetic energy called solar winds from the sunspots.

These storms result from variations in the solar wind that cause major changes in the currents, plasmas, and fields in Earth’s magnetosphere.

Solar Storms happen when Sun emits large bursts of energy in the form of solar flares and coronal mass ejections. These phenomena send a stream of electrical charges and magnetic fields toward the Earth at high speed.

Solar Storms are of the following types:

The solar wind conditions that are required for creating geomagnetic storms are:

These conditions are effective for transferring energy from the solar wind into Earth’s magnetosphere.

The largest storms that result from these conditions are associated with solar coronal mass ejections (CMEs) where a billion tons or so of plasma from the sun, with its embedded magnetic field, arrives at Earth. CMEs typically take several days to arrive on Earth but have been observed, for some of the most intense storms, to arrive in as short as 18 hours.

Sunspots: The dark regions on the Sun are cooler than the surrounding photosphere which is also the lowest layer of the solar atmosphere.

Solar wind: The solar wind is created by the outward expansion of plasma (a collection of charged particles) from the Sun’s corona (outermost atmosphere). This plasma is continually heated to the point that the Sun’s gravity can’t hold it down. It then travels along the Sun’s magnetic field lines that extend radially outward.

Magnetosphere: A magnetosphere is a region around a planet dominated by the planet’s magnetic field. Other planets in our solar system have magnetospheres, but Earth has the strongest one of all the rocky planets: Earth’s magnetosphere is a vast, comet-shaped bubble, which has played a crucial role in our planet’s habitability. It protects the planet from harmful solar and cosmic radiation as well.

Effect of a geomagnetic storm on Earth

Following are the major and minor impacts observed during the solar storms on Earth:

The space weather in the near-earth region and upper atmosphere is hugely impacted even if the solar storm does not reach the Earth. An aurora is a colorful light show in the sky caused by the Sun’s flares.

Auroras occur when particles from the Sun interact with gases of the Earth’s atmosphere, causing beautiful displays of light in the sky.

Auroras are a special treat because of the beautiful light show in the sky.

When a solar storm comes toward the Earth, some of the energy and small particles can travel down the magnetic field lines at the north and south poles into Earth’s atmosphere.

Any planet in the solar system that has an atmosphere and magnetic field, has auroras. Planets like Jupiter and Saturn have beautiful auroras.

How are geomagnetic storms predicted?

Solar Storms or geomagnetic storms are predicted by:

The magnetic field orientations can cause a more intense response in the magnetosphere which results in more violent magnetic storms.

Since the dependence of the world is increasing on satellites for most activities, it is imperative that space weather forecasts are improved and more efficient measures to safeguard satellites are invented.

Geomagnetic storm set to hit earth after filament eruption from the sun.