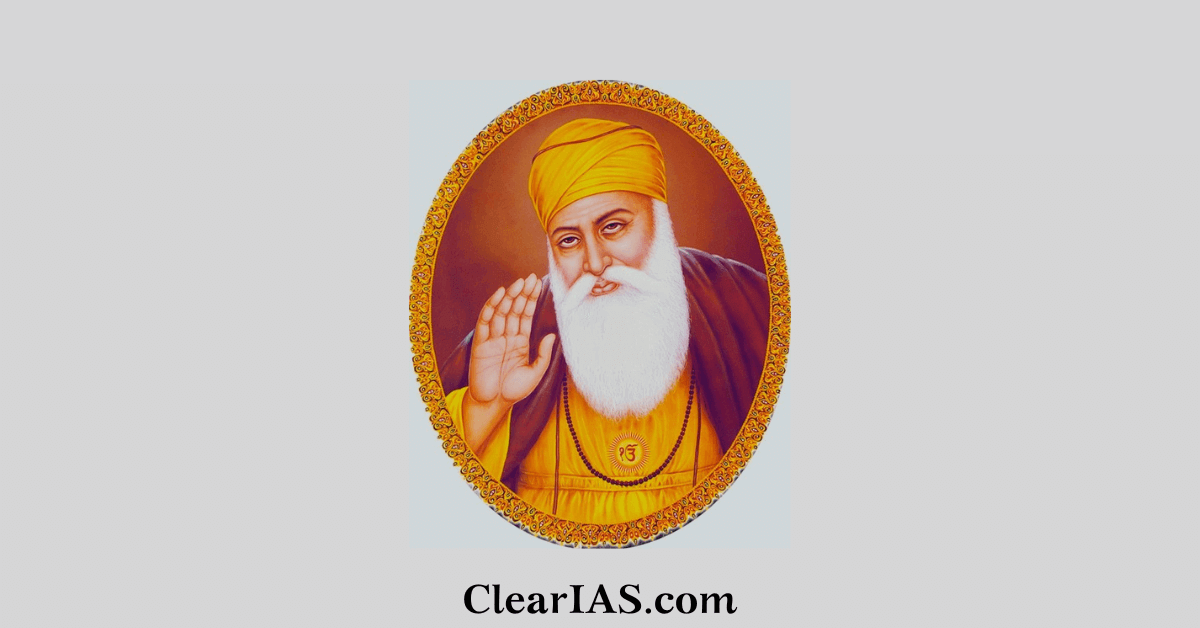 Guru Nanak Dev is one of the most revered Guru because of his noble teachings. This article takes you through the biography, teachings of Guru Nanak Dev.

Do you know that Sikhism is based on the teachings of Guru Nanak Dev?

He is not just a spiritual master, but also a philosopher, poet, traveller, political rebel, social leveller, and mass communicator.

Why Guru Nanak Dev so important and what are his teachings? All of this will be discussed in this article.

Guru Nanak Dev, the founder and first Guru of Sikhism, was born in the year 1469, in the village of Talwandi which is located in the Punjab region of the Indian subcontinent.

The village, now known as Nankana Sahib, is situated near the city of Lahore in present-day Pakistan.

The auspicious day of Guru Nanak Dev’s birth is commemorated by Sikhs all over the world on the Pooranmashi (full moon) day in the lunar month of Katak (October–November), which varies every year.

Guru Nanak Dev was inclined to spiritualism and displayed a spiritual and intellectual side from a young age, despite working as an accountant for a time.

According to Sikh beliefs, he experienced certain things in his early years that set him apart from other people and proved he was unique.

He performed meditation and hymns while Bhai Mardana played the rabab (a stringed instrument). One early morning, while Guru Nanak Dev was taking a bath in “Vain Nadi,” a little river, he received a call from God to devote himself entirely to serve people .

Guru Nanak Dev completed four significant spiritual trips over the following 30 years, traveling around 30,000 kilometres across India, South Asia, Tibet, and Arabia with Bhai Mardana by his side.

He preached the new definition of God during these journeys: “Supreme, All-Powerful and Truthful, Formless (Nirankar), Fearless (Nirbhau), Without Hatred (Nirvair), the Sole (Ik), the Self-Existent (Saibhang), the Incomprehensible and Everlasting Creator of All Things (Karta Purakh), and the Eternal and Absolute Truth (Satnam).”

Guru taught people that all of God’s creations include the “One” God and that everyone has direct access to God without the need for priests or ceremonies.

Guru Nanak Dev opposed the stronghold of the Hindu Caste System and denounced the theocracy of the Mughal emperors, erecting a distinctive spiritual, social, and political platform founded on equality and fraternal love.

He warned the crowd about the perils of egotism, deception, and hypocrisy while urging them to express their worship through the “Naam” (God’s name).

His emphasis was on a householder’s (family) life centred on moral behaviour, selfless service (Sewa), and ongoing devotion to the memory of God’s name. He opposed the road of renunciation (Tyaga).

Asserting the equality of women was a particular focus of Guru Nanak Dev’s advocacy for human equality and the issues of the oppressed and the underprivileged.

Guru founded and made his home in the Punjabi township of Kartarpur, also known as the “creator’s town,” in the last years of his life.

He put on the garb of a peasant here and worked the field to make an honest living for himself. People from near and far gathered to hear the master’s speech.

At Kartarpur, he established the Langar (free communal kitchen) institution, establishing the fundamental equality of all individuals regardless of their social or economic status.

This mantra was held in 1500, a time before the idea of poverty alleviation, and it is true today when poverty still exists in many parts of the world.

At the age of 12, Guru Nanak Dev’s father gave him Rs. 20 to start a company. Nanak purchased food for 20 rupees and distributed it.

Nanak explained to his father that this investment was a “real business” when he questioned him about it.

It is terrible to classify people based on their religious beliefs. “There is neither Hindu nor Muslim,” the Guru said.

He observed folks in Hardiwar offering Ganges water toward the sun in the east as a sacrifice to their departed ancestors in heaven. He started tossing water in that direction.

3. Women are Equal to Men

Guru Nanak Dev allowed women to attend religious gatherings and freely laud God at a period when other Indian religions demanded quiet, demure women in the temple and no women in the mosque.

4. Running Away to a Forest Won’t Give You Enlightenment

In the past, perhaps, one could find enlightenment in the woods, but not anymore. Furthermore, Guru Nanak doesn’t even demand that you do anything.

He thought that staying at home was preferable to leaving for the pursuit of the ultimate truth. Even after attaining knowledge, Nanak continued to be a farmer.

5. These Five Evils are Probably Ruining Your Life

Most, if not all, the suffering of big city life comes from these five evils.

To learn how to live morally, you need a mentor. According to Guru Nanak Dev, practicing righteousness is far preferable to traveling to holy places.

Every single day, more than 100,000 people of different faiths are fed at the Golden Temple in Punjab. It is a religious obligation, not because there is some sort of divine advantage.

The idea of unselfish service was a way of life for Nanak.

8. Fight Superstition of Any Kind

Nanak spent his entire life challenging formal procedures, caste, and traditions that were absurd. By removing the clutter of what society tells you to do, you may find meaning and purpose in your own life in the simplest possible way.

It is not hard to practice the tenets of Sikhism. There are only three:

i. Vand Chako: Sharing with others

Your travels will benefit you greatly. At a time when religious leaders didn’t leave their communities, Guru Nanak Dev travelled by foot to Saudi Arabia, Iraq, Ladakh, and Tibet.