ClearIAS » Geography Notes » Heat Dome: All you need to know 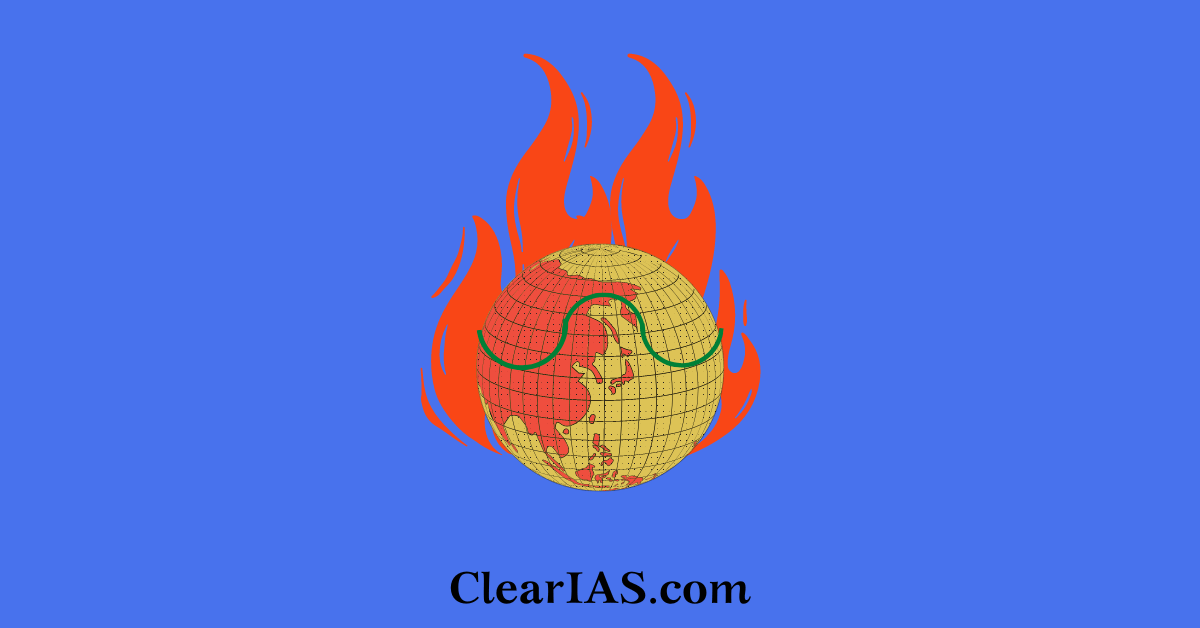 What is a heat dome? Is heat dome and heat wave are same? How were they formed? What are the impacts of heat dome? Read further to know more.

Over the New Year’s holiday, a number of regions of Europe experienced an unusual winter heat wave. Ten to twenty degrees Celsius above average temperatures were recorded. Due to the development of a heat dome over the area, the continent is currently going through an extremely warm period.

According to the National Oceanic and Atmospheric Administration (NOAA), a heat dome happens when the atmosphere traps hot ocean air like a lid or cap.

When the waters of the eastern and western Pacific are both warm, a heat dome is more likely to form during La Nia years.

What is Heat Dome?

A heat dome is a high-pressure weather pattern that can cause extreme heat and humidity. It is a type of atmospheric circulation that is characterized by a dome or ridge of high pressure aloft, with descending air at the surface.

This sinking air can lead to clear skies and very hot temperatures, as the air becomes compressed and warms as it sinks. It can also cause drought conditions, as the sinking air suppresses the development of clouds and precipitation.

A heat dome forms when warm air is trapped over a region for a long time, much like a pot lid. Every day that passes brings warmer conditions because the sun works harder to heat the air the longer it is trapped.

Heat domes typically last a few days, but they occasionally last for up to weeks, which could result in deadly heat waves.

Scientists contend that air is forced to sink in any area of high pressure, whether or not it is a heat dome. Once the air reaches the ground, it is compressed and becomes even hotter.

Additionally, as air sinks, it becomes drier, pushing the temperature of the area even higher.

These are often associated with extreme heat waves and can be dangerous to people, especially those who are sensitive to heat or have certain medical conditions.

Are Heat Domes and Heat Waves the Same?

Heat domes and heat waves are related, but they are not the same thing. A heat dome is a weather pattern characterized by a high-pressure system aloft and sinking air at the surface. This can lead to clear skies and very hot temperatures.

A heat wave, on the other hand, is a prolonged period of excessively hot weather. The definition of a heat wave can vary depending on the region and the time of year, but it generally refers to a period of several days during which the temperature is significantly higher than the average temperature for that time of year.

Heat waves can be caused by a variety of weather patterns, including heat domes, but they can also be caused by other factors such as a strong ridge of high pressure or a lack of cloud cover.

The jet stream is a strong, fast-flowing wind current that typically blows in the upper levels of the atmosphere. It is found at the boundary between cold air to the north and warm air to the south, and it typically flows from west to east.

The jet stream is an important factor in the formation and movement of weather systems, and it can influence temperature, precipitation, and other weather conditions.

Heat domes are often associated with a strong, broad ridge of high pressure in the upper atmosphere, which can cause the jet stream to become “stuck” or slowed down. When this happens, the jet stream can be deflected north or south, leading to a persistent weather pattern that can last for several days or even weeks.

In the case of a heat dome, the jet stream may be deflected northward, allowing warm, humid air to flow into the region and leading to hot and potentially dangerous conditions.

What are The Causes of the Formation of Heat Domes?

Heat domes can be caused by a variety of factors, including:

How Do Heat Domes Impact Humans?

Heat domes can have significant impacts on humans, as they can lead to extreme heat and humidity. Exposure to extreme heat can be dangerous, especially for vulnerable populations such as the elderly, young children, and people with certain medical conditions.

Heat exhaustion and heat stroke are common health problems that can result from prolonged exposure to extreme heat.

Dizziness, fatigue, and headaches are some of the symptoms of heat exhaustion, a condition where the body becomes dehydrated and overheated. When the body’s temperature regulation system is overworked, a more serious condition known as heat stroke develops. If it is not treated quickly, heat stroke can be fatal.

In addition to the health impacts, heat domes can also lead to other problems such as power outages, due to the increased demand for air conditioning, and decreased air quality due to the buildup of pollutants. It can also have impacts on agriculture, as extreme heat and drought conditions can damage crops.

What Are The Effects Of Heat Dome?

This can have a variety of effects, including:

Heat domes can also have other impacts, depending on the specific region and the weather conditions associated with the heat dome.

What Are The Steps to Avoid?

There are several steps that you can take to avoid heat domes and stay safe during extreme heat:

There are several steps that can be taken to address the issue of heat domes and their impacts: