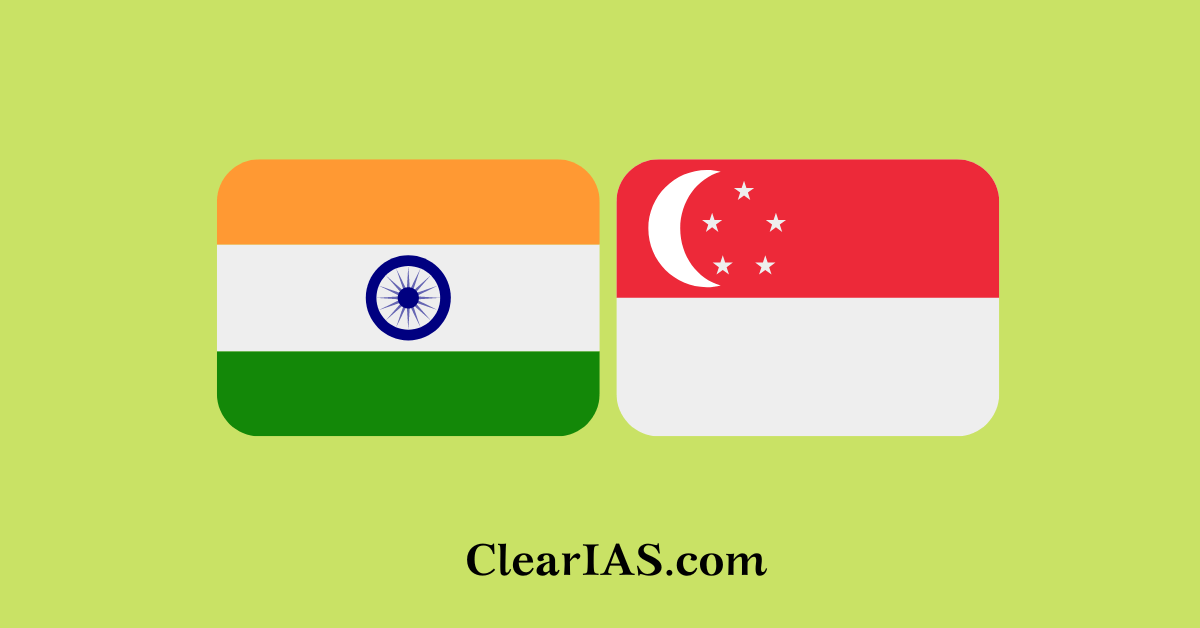 India and Singapore have maintained close and friendly relations traditionally. What are the recent developments in the India-Singapore relationship? Read here to know more.

The close ties between India-Singapore have a history rooted in strong commercial, cultural and people-to-people links.

India was one of the first countries to recognize Singapore in 1965. Read here to know more.

The relationship between India- Singapore extends back to the Cholas. The more recent association is attributed to Sir Stamford Raffles, who established a trading station in Singapore on the way of the Malacca Straits in 1819, which became a British Indian colony ruled from Calcutta (1830-1867). The colonial connection can be seen in the similarities of institutions and practises the use of English and the existence of a sizable Indian minority.

EAM’s (External Asset Managers) visit to Singapore in August 2014 resulted in adopting the “5-S Plank,” which designates five areas of collaboration to strengthen bilateral ties. The relationship is directed at the 5S Plank.

The 25th SIMBEX “Singapore-India Maritime Bilateral Exercise” had taken place from the 10th to the 21st of November 2018 off the coasts of the Bay of Bengal and the Arabian Sea. SIMBEX is a series of naval exercises between the Indian Navy and the Navies of the Republic of Singapore. The acronym ‘SIMBEX’ stands for Singapore-India Maritime Bilateral Exercise. SIMBEX is celebrating its Silver Jubilee this year. To commemorate the momentous event, both navies are conducting exercises across a wide geographic area.

The Indian Navy and the RSN have a long history of professional ties. It comprises exchange programmes, staff presentations, and course cross-registration.

The naval logistics pact is India’s first pact of that kind with a country located east of Malacca, which is one of the world’s most significant maritime lanes. Economically, it is regarded as a crucial choke point for global commerce, and China regards it as a danger to its energy security. This would allow India to have a stronger presence in the contentious waters of the South China Sea.

India’s presence in Chahabar port and the Changi Naval Base in Singapore may enable India to emerge as a net security provider in the Indian Ocean region, allowing the navy to conduct lengthy deployments in the area.

Significance of Singapore for India

Singapore, being one of ASEAN’s founding members, plays a critical role in sustaining regional peace and security, as well as supporting ASEAN’s goal of creating and fostering development and prosperity. When Singapore joined ASEAN, it was an obligation since it needed to establish its credibility as an independent nation and produce additional trade, but Singapore later evolved to a particular level in comparison to the rest of the ASEAN countries. Slowly, it grew to the point that Singapore began giving trading posts and capital entrepreneurship. 88 Singapore backed the establishment of the ASEAN Free Trade Zone.

Singapore has been influential in speaking her opinion in ASEAN, which has resulted in India getting the dialogue partnership in ASEAN in 1995 before India was only a sectoral conversation partner. Singapore was also instrumental in bringing India and the ASEAN countries together.

It is worth repeating that the signing of the CECA with Singapore was a significant step forward for both countries. Singapore supports India’s ambition to become a major and prominent participant in the Southeast Asian region, and in order for India-ASEAN relations to be fruitful, Singapore is more than happy to act as a go-between.

In the international arena, India has a close working relationship with Singapore, and a number of regional mechanisms connect these two countries together, including ASEAN, the ASEAN Regional Forum (ARF), ASEAN plus three, the East Asia Summit, and the ASEAN Defence Ministers Meeting (ADMM) Plus. Singapore has vigorously backed India’s expanded geostrategic influence in ASEAN, as well as India’s permanent membership in the United Nations Security Council.