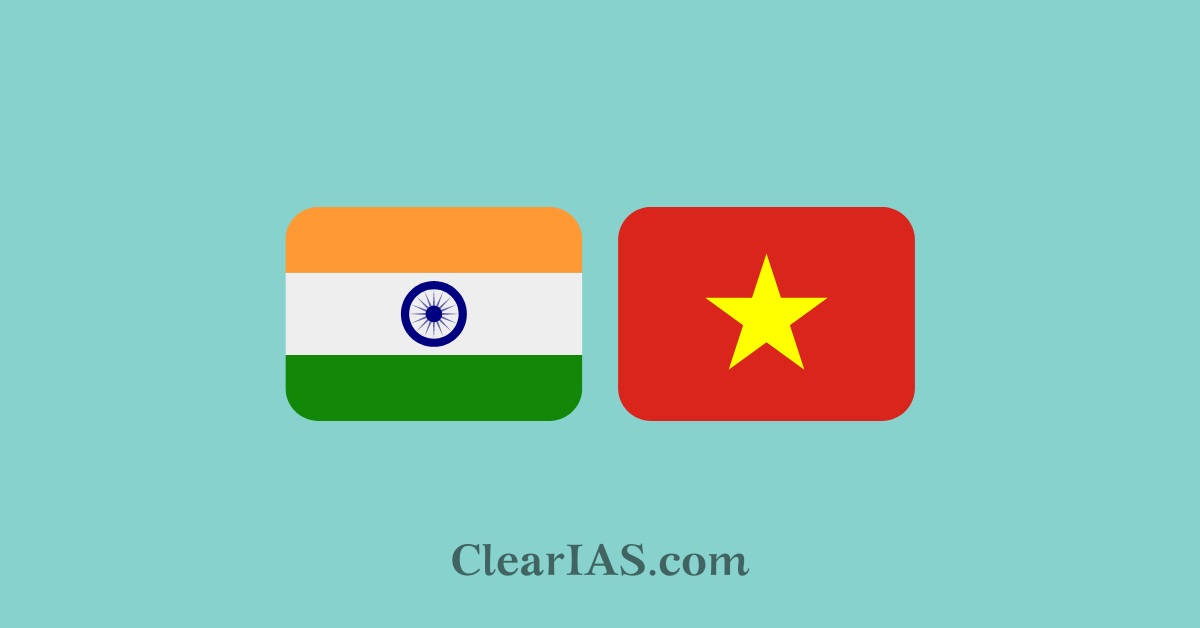 India-Vietnam relations are marked by growing economic and commercial engagement. Read here to know more about the bilateral engagements.

Indian Defence Minister visited Vietnam, where he signed some Defence Agreements, which will significantly enhance the scope and scale of existing defense cooperation.

India and Vietnam are marking 50 years of the establishment of bilateral diplomatic relations.

India-Vietnam relations have been exceptionally friendly and cordial since their foundations were laid by the founding fathers of the two countries – President Ho Chi Minh, President Rajendra Prasad, and Prime Minister Nehru.

The traditionally close and cordial relations have their historical roots in the common struggle for liberation from foreign rule and the national struggle for independence.

Pandit Jawaharlal Nehru was one of the first visitors to Vietnam after its victory against the French at Dien Bien Phu in 1954.

India was the Chairman of the International Commission for Supervision and Control (ICSC) which was formed to implement the 1954 Geneva Accords and facilitate the peace process in Vietnam.

India supported Vietnam’s independence from France, viewing it as being similar to India’s struggle against British colonization.

India also opposed the American involvement in Vietnam was of 1955- Prime Minister Nehru emphasized that it will be a mistake for the US to get involved.

India established diplomatic relations with North Vietnam on 7 January 1972, a year before the US withdrawal from Vietnam and three years before the Fall of Saigon in 1975.

India supported the reunification of Vietnam and the two countries have maintained friendly relations.

India granted “Most Favoured Nation” status to Vietnam in 197.

Both nations signed a bilateral trade agreement in 1978 and the Bilateral Investment Promotion and Protection Agreement (BIPPA) on 8 March 1997.

In 2003, a free trade agreement was negotiated and in 2010 the ASEAN-India Free Trade Agreement came into effect.

Bilateral trade has increased rapidly since the liberalization of the economies of both Vietnam and India.

Bilateral trade between India and Vietnam has been declining by 22.47% from the previous fiscal years largely due to disruptions caused by the COVID-19 pandemic.

The main items of imports from Vietnam are mobile phones & accessories, computers, and electronics hardware, machinery and equipment, chemicals, rubber, ordinary metals, wood and wooden products, fibers of all kinds, pepper, means of transport, products of steel, coffee, footwear, products of chemicals and polymers and resins.

The bilateral foreign investments between the two countries have also been on the rise.

India and Vietnam agreed to strengthen their strategic partnership in line with India’s Indo-Pacific Oceans Initiative (IPOI) and the ASEAN’s Outlook on Indo-Pacific to achieve shared security, prosperity, and growth for all in the region.

India and Vietnam are both members of the Mekong–Ganga Cooperation, created to develop and enhance close ties between India and the nations of Southeast Asia.

Vietnam has supported India’s bid to become a permanent member of the U.N. Security Council and join the Asia-Pacific Economic Cooperation (APEC).

Defence Cooperation has emerged as a significant pillar of our strategic partnership with Vietnam.

Apart from this, the defence relations include capacity building, dealing with common security concerns, training of personnel, and cooperation in defence R&D.

It also participated in the PASSEX Exercise with the Vietnam People’s Navy.

Vietnam has a key role to play in India’s act east policy which looks to expand engagement that is mutually positive and which ensures inclusive growth for all in the region.

Strengthening ties with Vietnam will eventually lead a step toward the realization of the SAGAR (Security and Growth all in the region) initiative.

India Vietnam partnership is important for boosting the blue economy of the indo pacific region as well as for security.

In the Mekong-Ganga Cooperation, an initiative of six countries, which of the following is/are not a participant/ participants? (2015)