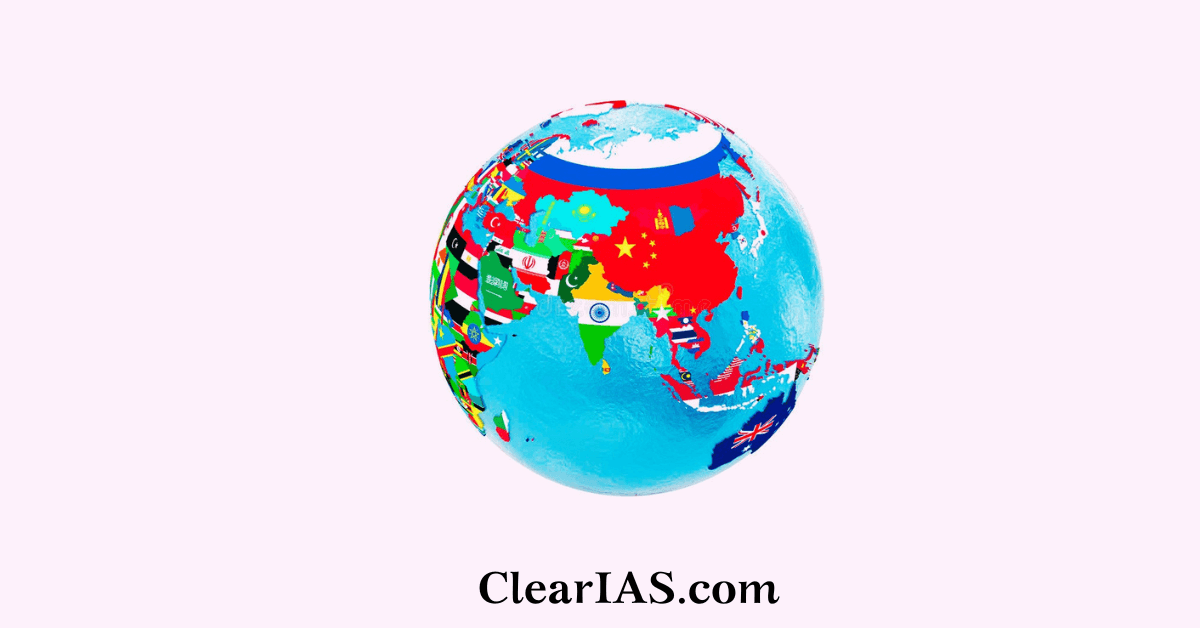 Foreign policy is the instrument to realize the national interest of a country. What are different phases of Indian foreign policy? Read here.

India is on its path to become a regional superpower with considerable influence in global affairs.

Our foreign policy is a critical component in projecting this image and achieving many of its objectives.

Read here to know more about Indian foreign policy and its future.

The foreign policy of India or any country is shaped by two factors – domestic and international. Domestically, India’s history, culture, geography and economy have played an important role in determining the objectives and principles of India’s foreign policy.

The international factor, which is marked by the Cold War rivalry between NATO and the Warsaw Pact, the founding of the UN, the weapons race, notably the nuclear arms race, anti-colonialism and anti-imperialism, etc.

The 3 S’s – Space for Strategic Autonomy, Stability – Both Within and in the Neighbourhood, Strength – Economic, Military, and Soft Power to Protect and Advance Indian Interests – have been mentioned by many specialists as the best way to summarise the objectives of Indian Foreign Policy.

The extent to which Indian foreign policy has succeeded in achieving these objectives is debatable. What is undeniable, though, is that foreign policy plays a critical role in ensuring that India achieves her goals as a country both now and in the future.

Let’s examine the many stages of our foreign policy’s development and the underlying elements that have influenced it.

Indian Foreign Policy can divided into seven phases of evolution:

Jawaharlal Nehru, one of the most important leaders in the national movement. He served as the president of India at the time of independence. Along with serving as Prime Minister, he also served as Foreign Minister. He influenced Indian foreign policy for years to come as a steadfast idealist based on Gandhian and socialist ethos.

The concepts themselves were derived from the national movement and the prevalent progressive philosophies of the period. Non-Alignment served as the cornerstone of the country’s foreign policy at the time. India ascended to the position of dominance among the nations of the third world through the Non-Alignment Movement (NAM).

The main concern was to stay out of the USSR and US government’s Cold War block rivalry. The standard for judging issues was to be merit, not impartiality. Panchsheel, the five tenets of peaceful coexistence, served as the guiding ideals of this period.

India strongly opposed apartheid and backed efforts to decolonize the country. We also emphasised the need for peacekeeping and disarmament. This was made abundantly evident by our involvement in the Korean War. And the fact that we sponsored the Partial Test Ban Treaty.

The emphasis was also on inclusive and equitable development, Afro-Asian unity at the Bandung Conference, and multilateralism through the UN, Commonwealth, and other organisations. India’s idealistic outlook earned it respect among its neighbours and even among advanced western countries.

India was viewed as the obvious leader among the newly independent emerging countries. However, idealism had its limits. Non-Alignment was deemed “immoral” by the USA.

When India brought the Kashmir dispute before the UN, the US and the UK interjected, making matters more complicated and serving as the main impediment to a resolution.

The Sino-Indian War of 1962, in which China, a nation we had supported fervently since 1949, essentially turned its back on us and attacked, was perhaps the cruellest blow.

After the Sino-Indian War, we also lost Mr Nehru, our Prime Minister. Lal Bahadur Shastri’s leadership was tough but not as effective as his predecessor’s on a global scale. The Indian Foreign Policy was impacted by this.

We had to start a new war in 1965 after Pakistan attacked us. In addition to this, the US imposed food sanctions on us for questioning the US’s role in Vietnam.

We also had a time of reflection during which we realised that realism, rather than idealism, was the foundation upon which the universe operated.

Smt. Indira Gandhi became the prime minister in the latter half of the decade. The challenges we overcame also presented us with several internal opportunities. The much-needed modernization of the Indian military was brought about by the Sino-Indian War.

The US sanctions served as the impetus for the Green Revolution, which produced enough food. The 1965 Indo-Pak war also helped India in the future by sparking strategic thought. The fractious years served as the foundation for the change in Indian foreign policy for many years.

In India’s political system, Smt. Indira Gandhi had established her dominance by 1971. Centralization, Authoritarianism, and Courage in the face of adversity were traits that defined her reign.

Indian foreign policy acknowledged the value of power for the first time. So to speak, we returned to our Kautilyan origins.

The 1971 Indo-Pak War, which led to the establishment of Bangladesh, demonstrated the power of India’s military prowess and diplomatic skills. We were able to resist pressure from the USA by signing a friendship treaty with the USSR.

We conducted our first nuclear weapons test in 1974 and then left the Non-Proliferation Treaty because it was unfair.

As India became closer to the Soviet Union during this time, non-alignment gradually eroded as well. Socialist policies, such as nationalising banks and enforcing stricter licencing requirements, were also consolidated. Through it all, the economy was neglected, and in 1991, it finally bit us.

In the early 1990s, India did not do so well. The economy had been poorly managed, which had resulted in the current foreign exchange crisis. The North East, Punjab, and Jammu and Kashmir all saw mutinies during that time. The Soviet Union, our biggest “friend” on the international stage, swiftly fell apart, leaving us “friendless.”

Additionally, the crisis brought about certain logical changes in the economy and foreign policy. A new economic strategy focused on globalisation, privatisation, and liberalisation was established.

We made contact with the US and emphasised the need for closer ties. The next significant phase of Foreign Policy was put in motion by the robust performance of the Indian economy, which concealed domestic political weakness.

India conducted its second nuclear test in Pokhran to usher in a new era of foreign policy (1998). The first test and the response to it were circumspect, but the second test made it plain that India was now a nuclear-weapon state.

Despite the US’s first response to sanctions, it soon became clear that democratic India, with its population and rapidly expanding economy, could be an ally in the future. This sparked the Talbott-Jaswant Singh negotiations, which greatly enhanced ties between the US and India.

The Indian economy was now expanding at a rate of around 8% annually. We saw the middle class grow and the IT revolution. On the strength of its reputation as a democracy and a strong economy, India also increased its soft power. A Look East Policy and better ties with China were added to the strong US connections.

In 2008, the US and India signed the Civil Nuclear Agreement, which was a significant victory for India. The prosperity of the Indian diaspora in the US contributed to the rapprochement of the two nations.

In 2011, a group of thinkers published the NAM 2.0 paper. This emphasized the need for strategic autonomy to underpin Indian foreign policy.

Strategic autonomy has continued to be an important factor in guiding India’s foreign policy, despite criticism that it focused too heavily on the now-outdated Non-Alignment idea.

Mr Narendra Modi, who is regarded as India’s most powerful Prime Minister since Ms Gandhi, rose to prominence following the 2014 general elections. With this transition in government, there was a change in foreign policy that was consistent with India’s influence on the global order.

It is based on Aristotle’s theory of Enlightened Self Interest, which holds that people who act in ways that advance the interests of others (or the interests of the organisation or groups to which they belong) ultimately advance their self-interest.

The Gujral Doctrine of the 1990s is modified, with a focus on soft power and neighbourhood first. Instead of the cautious strategy used during Non-Alignment, there is now a confident “multi-alignment” with major nations while yet protecting our strategic autonomy.

At first, there was a stronger readiness to interact with Pakistan, but the country’s position toward sponsoring terrorism has resulted in a deadlock.

The trade battle between the United States and China is still going strong.

Maintaining a balance in relations between the US and China should be the main focus of future Indian foreign policy. Although Indo-US ties are at their highest point since independence, there hasn’t been much progress in many sectors.

Some experts worry that relations will stagnate. Strong action must be taken in this direction if India is to profit.

Competition on the one hand and cooperation on the other represent Indo-China relations. The US-China trade conflict has provided us with an opportunity to strengthen our ties with China. This is a chance that cannot be passed up.

A major goal of foreign policy is a connected, integrated South Asia. The remaining nations must be the main focus if Pakistan is not receptive to the same. A step in this approach is the BBIN (Bangladesh Bhutan India Nepal) corridor.

The growth of India’s north-eastern region can be aided by connections with South East Asian countries via the India-Myanmar-Thailand Trilateral Highway and the Kaladan Multi-Modal Transport Corridor.

Lack of diplomatic skills is a significant barrier to India’s realising its potential in foreign policy. For a nation that aspires to be a global force, India lacks competent diplomats.

It is necessary to reform the Ministry of External Affairs and link it to the Ministries of Commerce and Défense. To fully utilise the synergies between the private sector and civil society, Track 2 diplomacy must be fostered.

Only a creative foreign policy can currently achieve the noble goal of stability while fostering inclusive growth. India must also make sure that it participates in the “rule-making” rather than the “rule-following” aspects of the international order.

To achieve this goal, one must be a permanent member of the UN and a member of all significant international organisations.