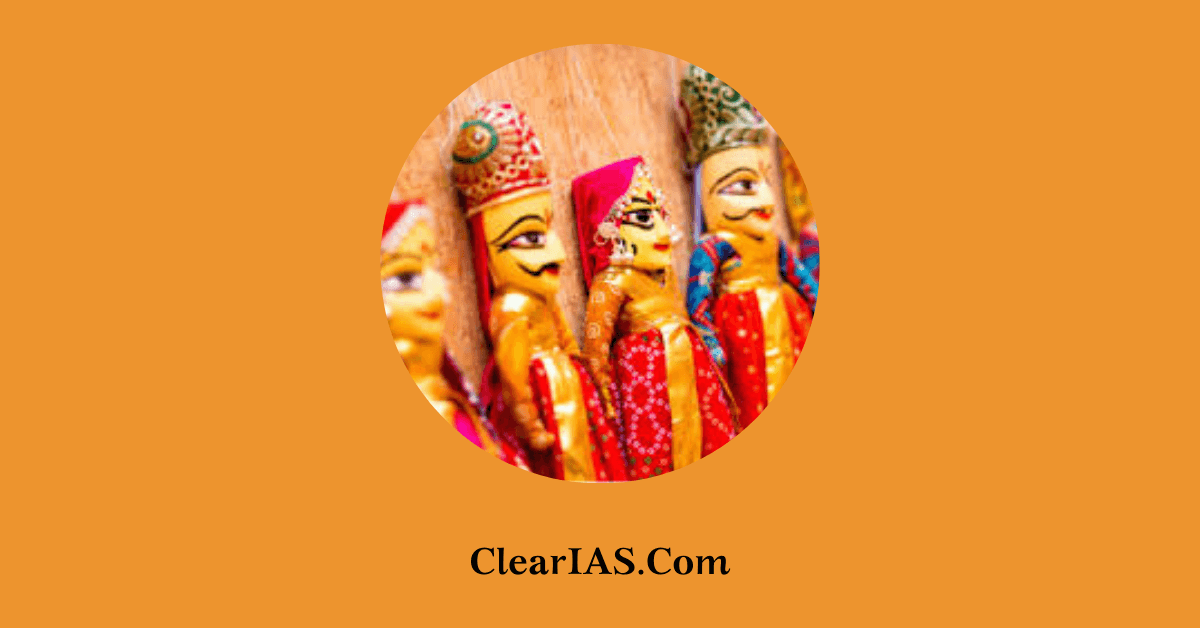 Indian puppetry is a centuries-old art of amusement. How did it originate? What are the different classifications of Indian Puppetry? Read further to know more.

Puppetry is a form of visual animation. Due to the engaging nature of the experience and the low production and animation costs, it is a favorite among independent artists. This form of entertainment gives unrestricted freedom to artists in design, colour, and movements.

The puppeteer employs their talents to give the inanimate puppet human-like speech, singing, dancing, and behaviour.

It is regarded as one of the earliest genres of storytelling.

Several references to marionette theatre from around 500 BC have been found. The discovery of puppets with sockets at the excavation sites of Harappa and Mohenjo-Daro suggests that puppetry was a well-liked art form at the time.

In the Sangham age, Silappadikaram, which was composed in the first and second century BC, as well as the Mahabharata both mention puppetry.

Along with being an artistic medium, puppetry has philosophical significance in Indian culture. In the Bhagavad Geeta, God is compared to a puppeteer who manipulates the universe with the three cords Satta, Raja, and Tama.

A broad variety of puppetry traditions have developed throughout India, each with its own distinct style of puppets.

Folklore, mythology, and local legends served as sources of inspiration. Puppetry has been infused with other artistic mediums, including painting, sculpture, music, dance, and theatre, creating a distinctive form of artistic expression.

However, this creative genre has been steadily diminishing in recent years because of a lack of devoted fans and financial uncertainties.

Puppetry in India can be classified into four categories: 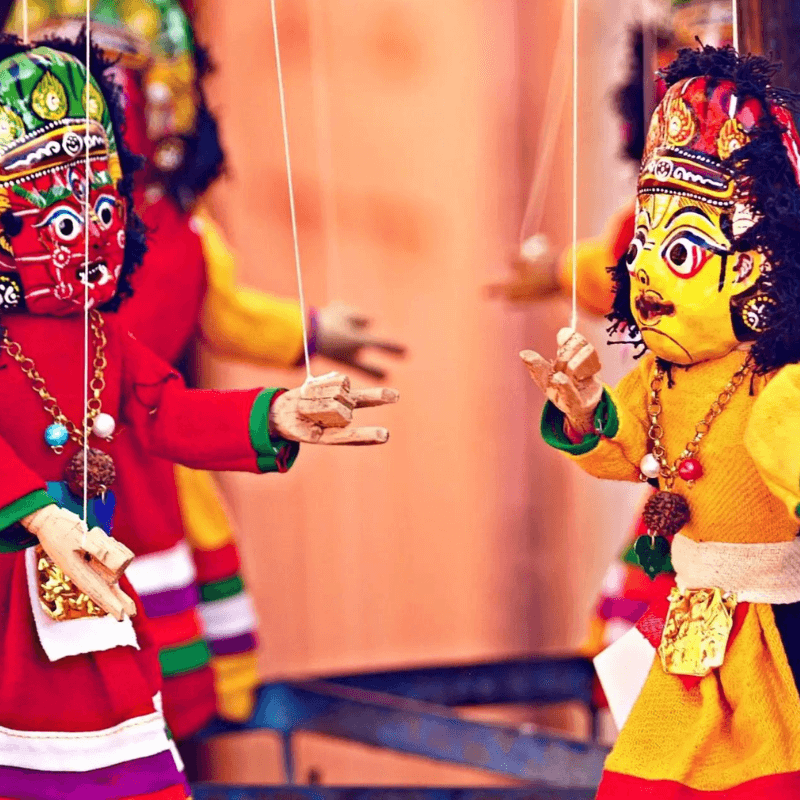 In Indian culture, string puppets are also referred to as marionettes.

The puppets are typically chiselled wooden replicas that are eight to nine inches long.

Little wooden pipes are connected to the body to create the limbs.

The body is then stitched together and covered in brightly coloured little clothing.

To make it look more lifelike, tiny diamonds and other decorations have been added.

The strings that are tied to tiny holes in the hands, head and back of the body are moved by the puppeteer.

Either leg, arm, and shoulder, as well as the lower back and each side of the head, are connected by strings. A hand controller in the form of the letters H or X is attached to the strings. In other instances, additional strings are connected to various parts of the marionette’s body.

The most prominent examples of string puppets are: 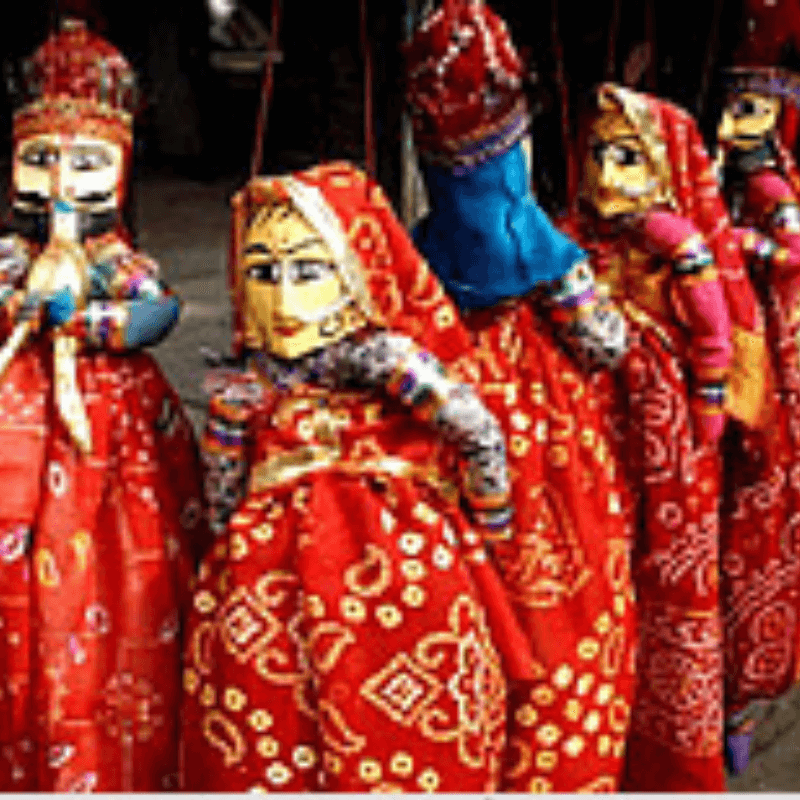 Kundhei is the name of the string puppets of Odisha.

They are made of light wood, and their skirts are long.

The puppeteer can move around with more ease because the puppets have more joints.

The strings are held together by a triangular prop.

The Odissi dance is prominently featured in Kundhei puppet shows. 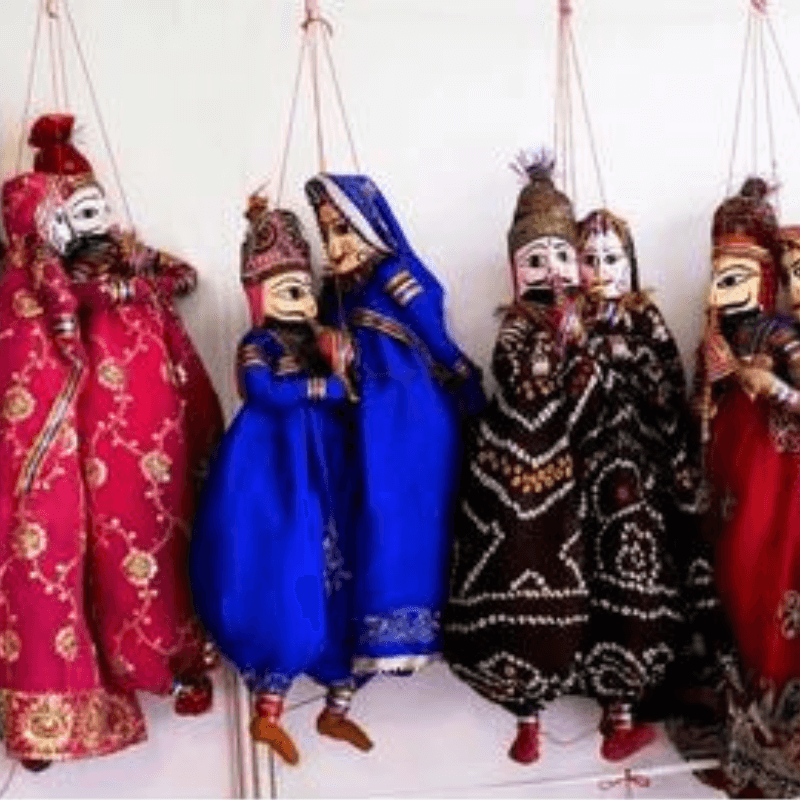 Kathputli, a traditional string puppet from Rajasthan, derives its name from the Hindi terms for wood and doll, respectively, “Kath” and “putli.

The presentation is accompanied by a dramatic folk music score, and the puppeteer’s finger is attached to the strings.

The absence of legs on the puppets is a defining characteristic. Puppetry called “bommalattam” has its roots in Tamil Nadu.

It combines elements of rod puppetry and string puppetry.

The puppeteer wears an iron ring on his head that is attached to the strings.

With some standing up to 4.5 feet tall and weighing up to 10 kilogrammes, the Bommalattam puppets are the biggest and heaviest marionettes in India.

The four distinctive stages of the Bommalattam theatre are Vinayak Puja, Komali, Amanattam, and Pusenkanattam. 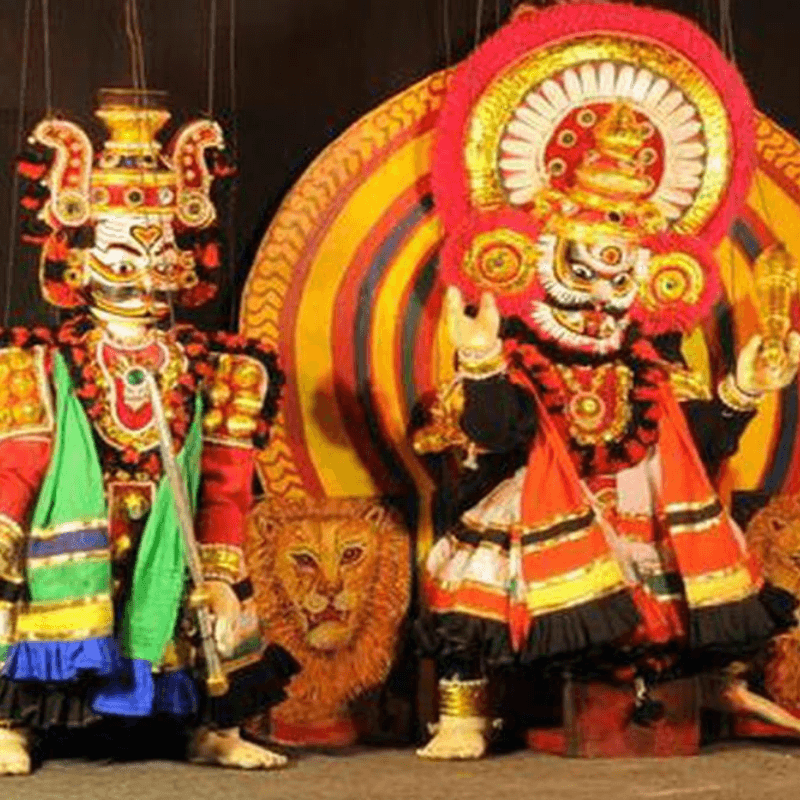 It is a traditional puppet show from Karnataka.

They are modelled after the many characters from the Yakshagana Theatres.

One noteworthy feature of this puppet is the use of more than one puppeteer to control the puppets. 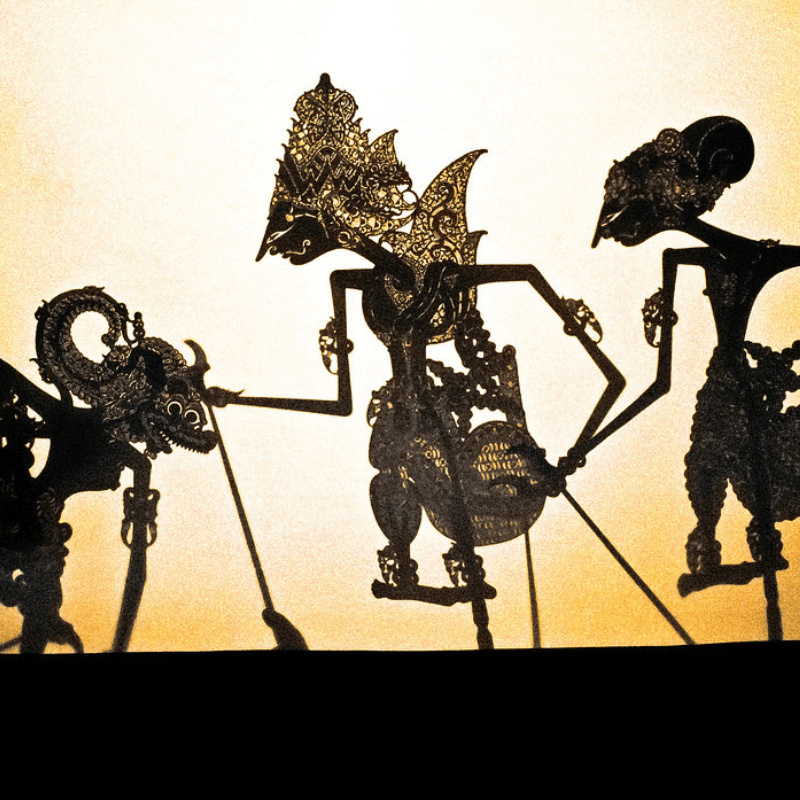 Shadow puppetry has a long history in India and has been handed down through the generations.

Flat figures made of leather are used as shadow puppets.

The miniatures are painted identically on both sides of the leather.

On a white screen, puppets are positioned, and light is flashed on them from behind to cast a shadow.

The figurines are altered such that the silhouettes they produce on the white screen tell a compelling story. It is the renowned shadow theatre of Karnataka.

A distinctive feature of Togalu Gombayetta puppets is the variation in puppet size based on social rank, with enormous puppets portraying monarchs and religious leaders and smaller puppets representing the underprivileged and slaves. 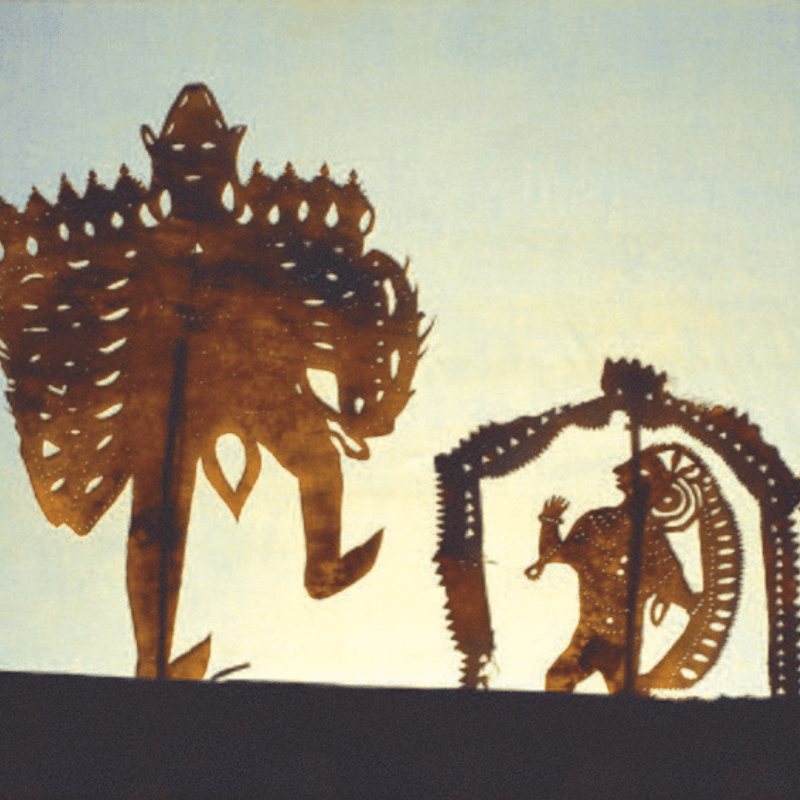 This style of shadow puppetry is the most dramatic, and it’s very well-liked in Odisha.

The puppets made of deer skin are posed in dramatic and bold.

Since they don’t have any joints, learning this art is very challenging.

It is common to employ puppets that are not human, such trees and animals.

Because they have acquired in-depth instruction in their field, the Ravanchhaya artists are able to produce poetic and delicate theatrical narratives. 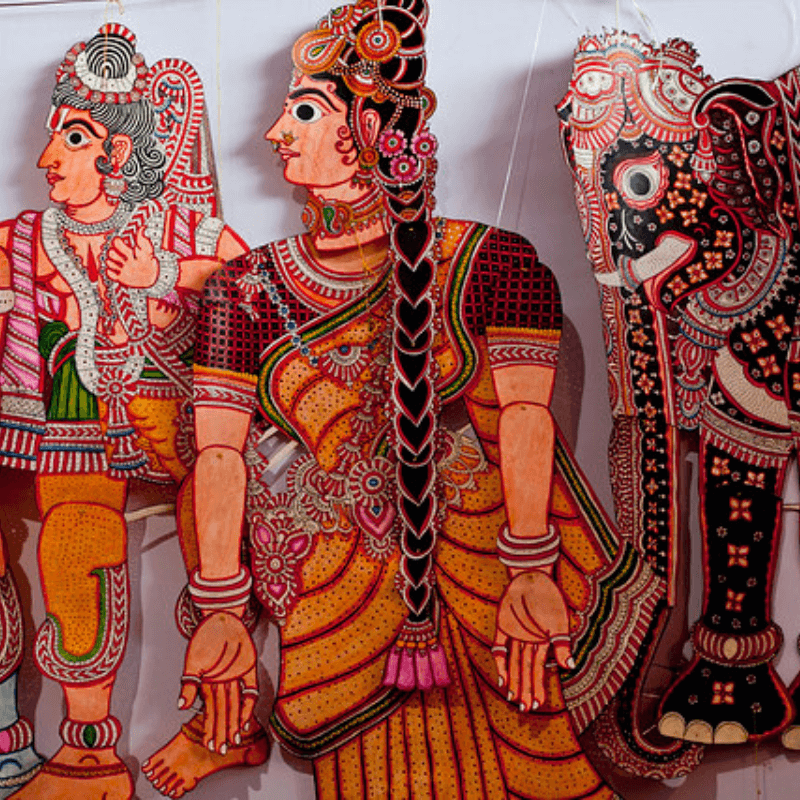 It is the shadow theatre of Andhra Pradesh.

With a classical musical background, the presentation focuses on legendary and holy stories from the Epics and Puranas.

The puppets have different colours on both sides and are larger.

In Eastern India, it is most often used. Rod puppet performances are well-known in West Bengal and Odisha.

These puppets are controlled by the puppeteer with the help of rods.

The puppeteer creates movement by moving their hands.

Bamboo, rice husk, and hay are used to create the puppet’s body and hands. The ingredients are mixed together and formed into the appropriate shape.

The following are a few well-known instances: 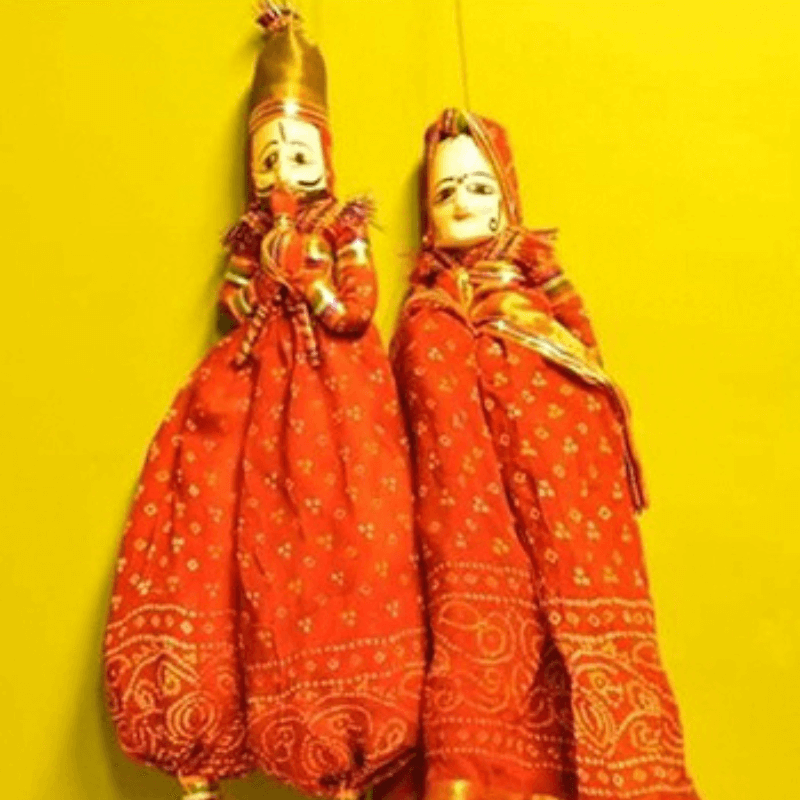 It is a typical rod puppet from Bihar.

The puppets often have no joints and are made of wood. 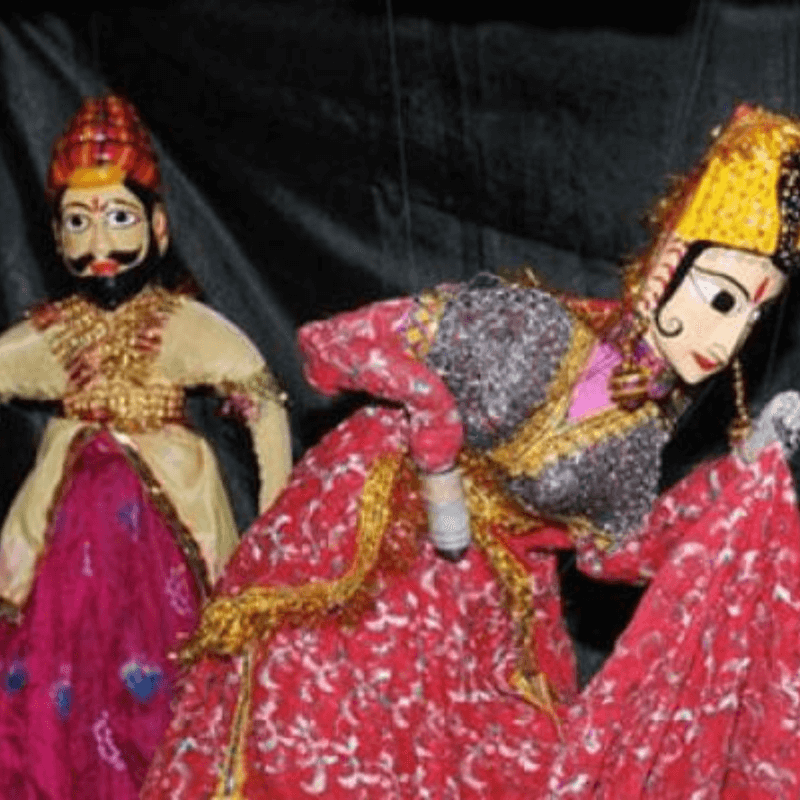 It is the customary rod puppet dance of the Bengal-Odisha-Assam region.

Typically three to four feet tall, the figures are dressed as Jatra characters.

During the performance, a musical group of three to four musicians uses a harmonium, cymbals, and tabla.

Other names for glove puppets are hand, sleeve, and palm puppets. They are little figurines with a head, arms, and a skirt that is long and flowing.

Although there are notable exceptions, most puppets are made of fabric or wood.

These puppets look like limp dolls, a talented puppeteer can make them move in a number of ways.

The head is made of papier-mache, linen, or wood, and two hands protrude from right below the neck. The rest of the body is covered with a long, flowing skirt.

The human hand manipulates the puppet by placing the first finger on the head and the middle and thumb on the puppet’s two other fingers.

In Odisha, glove puppet shows focus on Radha and Krishna stories, in contrast to Uttar Pradesh where they primarily address societal issues. 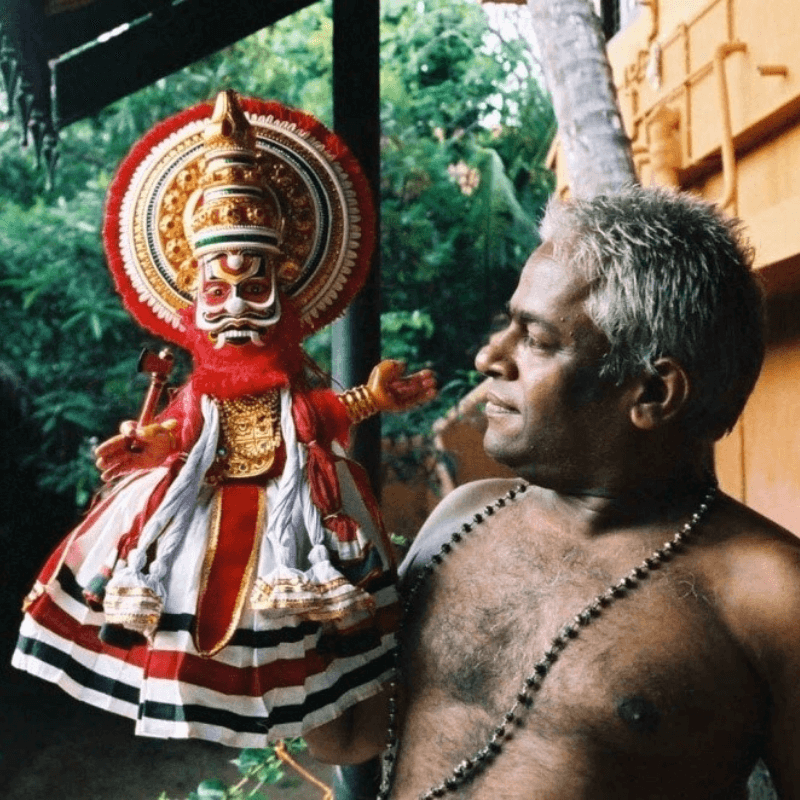 It developed in the 18th century as a result of the influence of Kerala’s renowned classical dance-drama known as Kathakali on puppet shows.

A puppet in Pavakoothu can be between one and two feet tall. Wooden arms and a wooden head are joined by thick fabric that has been cut and sewed into a small bag-like structure.

The puppets’ faces are adorned with paint, tiny pieces of thin gilded zinc, peacock feathers, and other decorations.

The musical instruments used during the concert were chenda, chengila, ilathalam, and shankh .

In the majority of the world’s areas, puppetry has been a crucial component of information exchange. Puppetry combines elements from a variety of artistic mediums, such as literature, painting, sculpture, music, dance, and theatre, and it gives pupils a creative out.