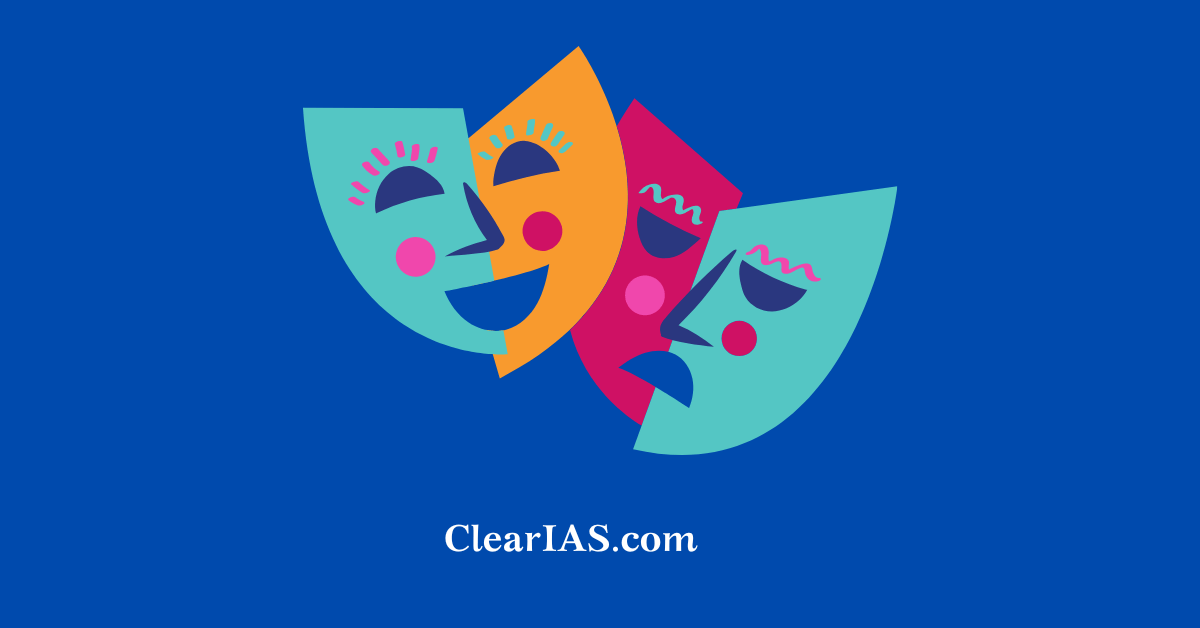 Indian theatre has existed for almost 5000 years. Sanskrit theatre, which first appeared sometime in the second century BC, was the earliest type of Indian theatre. Read more to find a one-stop solution for theatre forms in India.

The Sanskrit word “nataka” derives from the root “nata,” which in Sanskrit means dancer.

In addition to these names, the drama was also known as Rupaka and Drishyakavya. In ancient India, two types of plays were performed:

Lokadharmi: These depictions of daily life were accurate.

Natyadharmi: These were traditional plays with overt symbolism and highly stylized storytelling.

Sudraka initially introduced the idea of struggle in his play Mricchakatika. Along with a hero and heroine, this drama also features a new antagonist.

The most well-known of the Sanskrit playwrights is unquestionably Kalidasa.

Three of his compositions—Malavikagnimitram, Vikramorvashi, and Shakuntalam—are among the finest examples of classical Sanskrit theatre.

The protagonist was always a male who would ultimately succeed in getting what he desired.

In contrast to Greek tragedies, they usually had joyful endings.

Reasons for the decline of Sanskrit Theatre

Lyrical compositions started to take precedence over dramatic works as Sanskrit dramatists turned more of their attention to poetry.

Young playwrights had to turn to other genres because of the strict orthodoxy of the Sanskrit theatre.

As Sanskrit got more and more adorned, its popularity decreased. As languages like Pali and Prakrit replaced them, their use was more constrained to the religious community and among Brahmins.

Sanskrit theatre was put on the back burner as Muslim rulers came into power in favor of dance and music and thus started the deterioration of this classical form of Indian Theatre.

One of the most intriguing and well-known folk drama genres of the Indian state of Himachal Pradesh is kariyila, also known as kariyala.

In the Himachal Pradesh districts of Shimla, Solan, and Sirmour, this open-air folk theatre style is especially well-liked.

It is a traditional folk theatre from Kashmir which is a prominent variety of Indian Theatre.

It has been mentioned in Natya Shastra.

It is a form of folk theatre from Jammu and Kashmir that incorporates both historical narratives and contemporary social satire.

It has a secular attitude while being performed by Muslims.

It includes dancing, singing, and acting.

It is a classic Assamese one-act play that dates back to the 15th and 16th centuries AD and was created by the illustrious Vaishnava Saint Sankaradeva and his student Madhavdev.

The epic presentation of it depicts scenes from Lord Krishna’s life.

The plays are written in Brajavali, a language that combines Assamese and Maithili.

A renowned folk theatre in the region of Uttar Pradesh is called Ramlila.

The Ramayana is performed along with songs, dances, and dialogues that occur in the days before Dussehra.

The majority of the time, male actors who also play Sita execute it.

In 2008, UNESCO designated the Ramlila celebrations as part of the “Intangible Cultural Heritage of Humanity.”

It is a ritualistic theatre dedicated to the local deity Bhumiyal Devta in the Garhwal region of Uttarakhand.

It is listed on the Representative List of the Intangible Cultural Heritage of Humanity maintained by UNESCO.

The members of the Bhandari caste dress in a Narasimha-themed religious mask (half-man and half-lion).

A well-known type of Rajasthani folk theatre is bhavai.

This form heavily relies on dance to convey the plot of several short plays.

The players balance a number of clay pots or metal pitchers while addressing the fundamentally amorous theme of the play.

Semi-classical music performed in a distinctive folk style on instruments like the dholak and jhanjhar complements the presentation.

The sutradhar is referred to as Nayaka in the Bhavai theatre.

A well-known kind of Odisha folk theatre is daskathia.

Gayaka, the lead vocalist, and Palia, the co-narrator, are the two narrators in this form.

Dramatic music played on the Kathia, a wooden musical instrument, is used to enhance the narrative.

The Manasha or Serpent Goddess festival is connected with the distinctive Assamese story theatre form known as Ojapali.

There are three distinct sections to the story: Baniya Khanda, Bhatiyali Khanda, and Deva Khanda.

Oja serves as the primary narrator, while Palis makes up the choir.

It is performed throughout the regions of Maharashtra.

This play is today known as Powada.

These folk musicians, the Gondhalis and Shahirs, sing operatic ballads that depict acts of valor.

It is a performance based on imitation and is based in Punjab (Naqal) and Uttar Pradesh (Bhand).

The performer is also known as ‘Behroopiya’ or ‘Naqalchi’ (impersonator).

To convey a social or political point, he employs humor, oddities, wit, and humor.

Artists from the Muslim Bhand Community perform it.

It is one of the earliest theatrical customs that are still current in Karnataka and some areas of Kerala.

It was performed in the royal courts of the Vijayanagara period by a unique group known as Jakkula Varu.

Initially, it was mostly a solo performer’s descriptive dance-drama.

Later iterations included more variables and transformed into a typical dance drama. It was significantly influenced by the Vaishnava Bhakti Movement.

Its name comes from the Burra, a percussion instrument that is regularly used in performance.

The performance is led by a major artist or storyteller, and the rhythm and chorus are provided by two co-artists.

Tal is a kind of cymbal, and Maddale is a kind of drum. It is typically thought of as Yakshagana’s precursor.

A Bhagavata tells the tale with the aid of several Arthadharis.

The drama is presented seated, without acting, dancing, or costumes.

Kerala and coastal Karnataka are where it is most commonly practiced.

The 300-year-old Kuruvanji is renowned for its classical Tamil poetry and tunes.

The focus of the story is a woman who is in love. Kuruvanji, who is also known as the “fortune teller,” foretells the heroine’s future.

The primary dance style in Tamil Nadu is called Bharatnatyam, and it is performed in a dancing ballet style.

The popular folk theatre Jatra is performed in eastern India.

The tradition was established by Vaishnava Saint Chaitanya Mahaprabhu and is typically performed outside.

Throughout his travels through rural Bengal, he disseminated Lord Krishna’s teachings using the Jatra medium.

In recent times, Jatra was used to narrate tales with secular, historical, and even patriotic themes.

A well-known kind of street theatre in Odisha is called Sahi Jatra.

In order to increase public awareness of important social, political, and cultural issues, the theatre has been widely used in India.

Indian theatre forms transcend all formal barriers to human interaction and, as an indigenous form, speak directly to the populace.