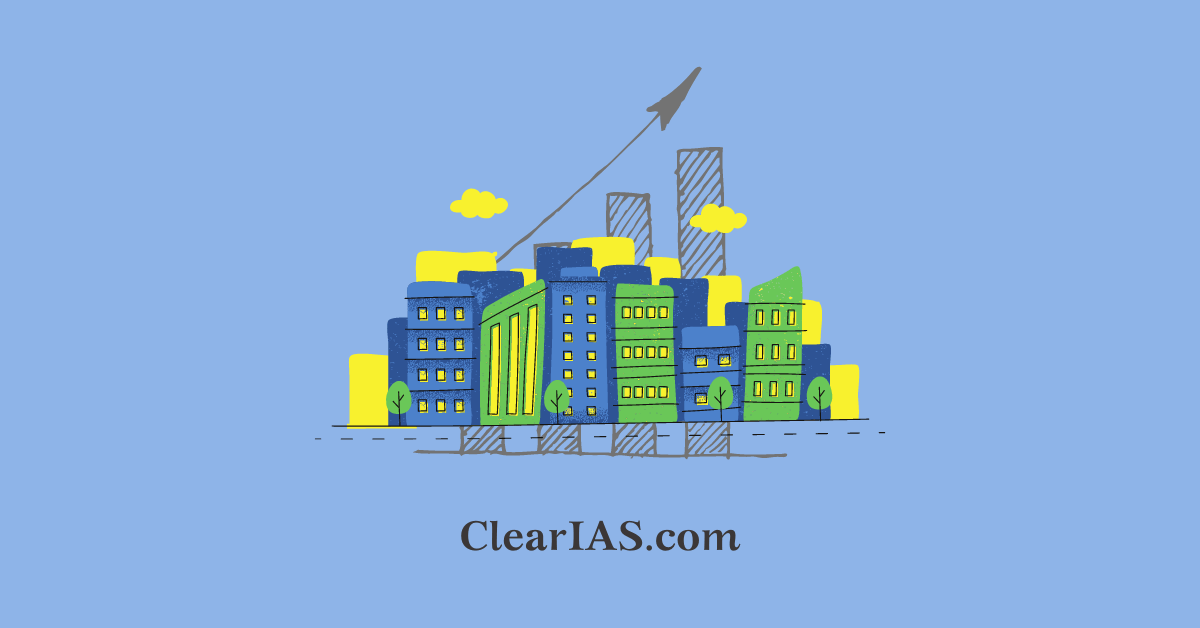 Why a better infrastructure is needed for economic development and what are the challenges associated with it?Read further to know more.

As India draws closer to being a $5 trillion economy, the government’s strategic initiatives to encourage the infrastructure sector are providing a boost to the collective growth of the Indian economy.

The manufacturing sector in India continues to face several difficulties due to the country’s poor infrastructure. According to reports, China spends 20% of its GDP on infrastructure development, compared to India’s 4.3% annual expenditure.

In an effort to promote the expansion of the manufacturing sector, the Indian government introduced the “Make in India” initiative in September 2014. This was done primarily to support India’s status as the preferred location for global manufacturing and to stimulate the design, innovation, and startup sectors.

Since independence, the government has had the full responsibility of providing the entire infrastructure like rail, roads, ports, power, airports, etc. But due to its capital-intensive nature, financial constraints, and human resource constraints, the government after LPG reforms (post-1991) seek the help of the private sector to bridge the infrastructural gap in the country.

In an economy, infrastructure can be built on the following three models:

Government constructs the entire infrastructure with a financial burden on its own and outsource some tasks and operation. Its maintenance is done by the government itself.

Private construction is responsible for the construction, maintenance, and operation of the infrastructure but the traffic may be regulated by the government.

The PPPs, which were implemented in the early 1990s, redefined the roles of the public and private sectors in the provision of public services. Public-private partnerships (PPPs) are a mechanism for the public and private sectors to work together to implement and maintain a project (often an infrastructure project) for the delivery of goods and services.

In a typical PPP project, generally, the government shall be responsible for getting all the clearances like environment, forest, water, power, and land acquisition and the private party shall be responsible for the construction and maintenance of the project. Any political risks like nationalization of a project, government abandoning the project in between, war or social unrest shall be taken care of by the government and the private party shall take care of design and construction quality and maintenance facilities.

A Robust Strategy: Procurement strategy is a very important aspect of the overall execution of infrastructure projects.

Technological Obsolescence: The entire project execution chain, including engineering, procurement, construction, and commissioning, uses technology. Though it is challenging for leaders to keep up with technological advancements from beginning to end.

Planning Strategy: The supply chain is a major issue for construction companies due to the vast variety and quantum of raw materials and supplies required. It requires proper planning and a crisis management plan to tackle sudden uncertainties.

Many infrastructure projects are today financially stressed, accounting for almost a third of stressed assets (Non-Performing Assets) in banks.

Large-scale infrastructure projects have been hampered by delays brought on by successive COVID-19 waves combined with a nationwide lockdown.

Current contracts place more of an emphasis on financial (government revenue) benefits than on providing services effectively. For instance, the bidder giving the highest revenue share to the government gets chosen for port and airport contracts.

Of late the government has started shifting its own responsibilities such as land acquisition, environmental and forest clearances, etc. in various projects to the private parties. If the private party is unable to obtain the clearances, it may abandon the project in the middle. As a result, there are disagreements between the public and private sectors, and the project is severely delayed.

Uncertainties and disruptions in the supply chain are serious problems that require immediate attention. Construction companies experienced severe shortages of building materials, a lack of transport capacity, and prolonged wait periods for construction supplies imported from overseas due to port congestion.

There is no existing structure for the renegotiation of projects in case of failure. If a bureaucrat restructures a project, there are no rewards; instead, it may lead to an investigation for graft. So, in such cases of failed projects, bureaucrats naturally avoid renegotiation and the project suffers long delays and court cases.

Certain bidders are involved in reckless bidding (very aggressive in quoting prices) as they that the government will come to their rescue in case the project faces financial distress (for example Tata Ultra Mega Power Project in Gujarat).

The India Infrastructure Project Development Fund Scheme (IIPDF Scheme), a Central Sector Scheme, would assist in the development of high-quality PPP projects by providing the financial support required to the project sponsoring authorities, both in the Central and State Governments, for developing a shelf of bankable viable PPP projects to achieve the goal of modern infrastructure for the country.

The DEA is putting a lot of emphasis on enhancing the quality and rate of infrastructure development in the country by encouraging private sector involvement in the sector. The DEA has taken a leading role in developing the ideal legal framework for private investment in infrastructure development. PPPs are promoted as a way to bring private capital and efficiency to the planning, construction, and maintenance of infrastructure projects. In addition, new programs and initiatives are being introduced to offer the private sector financial and technical support as needed.

Public Private Partnership in Infrastructure has been an important sector investment source. India is ranked second among developing countries in terms of both the quantity of PPP Projects and the related investments, according to the World Bank’s database on private participation in infrastructure.

India has to invest around $1.4 trillion in infrastructure over the next few years in order to reach a GDP of $5 trillion by 2024–25. In order to achieve this goal, the National Infrastructure Pipeline (NIP) was established with a planned infrastructure investment of around 111 lakh crores (US$ 1.5 trillion) between 2020-25.

To improve connectivity in the North Eastern Region, various infrastructure development projects have been undertaken by the relevant Ministries and Departments of the Central Government. These are related to enhancing the NER’s air, rail, road, waterway, power, and telecommunications connectivity.

In conclusion, India is certain to experience increased infrastructure expansion as a result of the government prioritizing infrastructure for overall economic development.

GatiShakti, for example, is a significant “productivity” booster initiative for the infrastructure industry. This program will assist in removing significant bottlenecks caused by the abundance of approvals and the lengthy clearing processes. Its multiplying effects will speed up project execution and keep expenses in check.

The program has the same transformational impact on the infrastructure market that the 1990s liberalization did. Additionally, given the endless possibilities, engaging private companies in national infrastructure projects may aid India in raising its infrastructure to international levels.