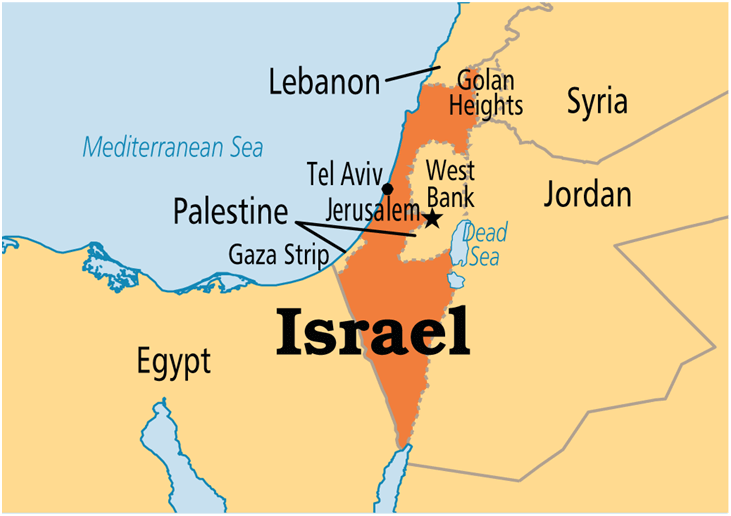 Recently, US President Donald Trump’s pledge to declare Jerusalem as the capital of Israel has caused controversy across the world. He also announced his plans to move the US Embassy to Jerusalem from Tel Aviv. Let’s analyse the implications of US Embassy in Jerusalem.

What is the capital of Israel?

Israel claims that Jerusalem is its capital, but this is not internationally recognised. This is because the ancient city is also the proclaimed capital of the State of Palestine. And more than that, Jerusalem is one of the main contentions in Isreal-Palestine conflicts.

So the answer to the question ‘what is the capital of Israel’ depends on who you ask. For the Israeli government, it’s simple: Jerusalem. But not all countries recognize this.

Jerusalem is a holy city for the 3 Abrahamic religions viz, Judaism, Christianity and Islam representing different periods of its history.

Except for three nations (US, Czech Republic and the island nation of Vanuatu), this annexation was not accepted by the international community and it still considers East Jerusalem as a part of Palestine territory. Thus, the demand for the boundary as existing prior to 1967 war is raised by nations for a Two-Nation Theory Agreement.

In deference to this, no country maintains its diplomatic missions in Jerusalem. Foreign embassies in Israel are located in Tel Aviv. The embassy of India for Israel is at Tel Aviv and has a Representative Office for Palestine at Ramallah in West Bank.

Israeli “basic law” however cites whole of Jerusalem as its capital. This act has been censured by the UN Security Council (UNSC) in “strongest terms” in 1980.

Israel government has a greater control over all parts of Jerusalem than the Palestinian government except for its East. This is more than evident with the settlement of Israelites to occupied parts of East Jerusalem and even West Bank. This is alleged to be a ploy by Israel to supplement it claims on these lands.

On the other hand, Palestine is territorially and administratively divided.

Remember, The Palestinian National Authority was the arrangement for Palestine administration of its territories after an agreement in 1994 and consequence of Oslo Accords of 1993. Elections in 2006 led to Hamas winning the Gaza strip and Fatah reduced to West Bank giving rise to an administrative division. The news of shellings during conflict you hear are alleged to be from this Gaza strip and against the actions of illegal settlement and alleged atrocities by Israeli Defence Forces (IDF) against Palestinian people.

The contentious territorial claims on Jerusalem have made it a no man’s land for embassies. Not willing to add to the conflict, nations choose not to have a permanent base of any form here until the Palestine problem is settled. In the two-state solution, i.e., the coexistence of Israel and Palestine as independent countries, Palestine considers East Jerusalem as their future capital. Importantly, in December 2016, UN had stated that Palestine territories in Jerusalem were under “hostile occupation”, i.e., by Israel.

Why is Jerusalem in news now?

The US president Donald J Trump in his White House speech earlier this month had announced that “it is time to officially recognize Jerusalem as the capital of Israel”. He added that it is a matter of time that US embassy is situated in Jerusalem.

Implications of recognizing Jerusalem as capital of Jerusalem

What the US administration hopes to achieve:

The UN vote on Jerusalem issue

Historically, UN has time and again chided Israel for its unilateral actions. UNSC passed a Resolution 476 asking the “Occupying Power” Israel to refrain changing the character, demographics and status of the Holy City of Jerusalem. (Reference – Wikipedia)

The Israeli “basic law” have no legal validity and constitute a flagrant violation of the Fourth Geneva Convention relative to the Protection of Civilian Persons in Time of War and also constitute a serious obstruction to achieving a comprehensive, just and lasting peace in the Middle East, the resolution had said.

Noting that Israel did not comply with this resolution UNSC came out with a stronger worded Resolution 478 in 1980 that asked nations to not have diplomatic missions in The Holy City, Jerusalem.

UNSC on December 18th voted on a resolution drafted by Egypt against the US decision to accept Jerusalem as the capital of Israel and shift its embassy there. It did not name the US in the resolution but asked nations respect previous UNSC resolutions on the matter. All other members had voted for the resolution seeking to stop the US in its tracks. But the US used its veto power to put paid to this effort. It was the first time in 6 years that the US had used it veto power.

On December 21, 2017, the UN General Assembly took up a resolution that was tabled by Turkey and Yemen on the same issue, as the UNSC had “failed to act”. Again the resolution did not name any country but asked nations that its actions that go against UNSC resolutions will be null and void. The US was found wanting here as the resolution was accepted with over two-thirds majority. However, the GA resolution in its “special emergency session”, unlike the UNSC one, is non-binding.

Earlier, US had threatened nations that if things go against the US it would cut back on this funding to UN and also have consequences to those nations. Also, Nikki Haley, US permanent representative to UN said that “No UN vote is going to make any difference” to the US decision to shift embassy to Jerusalem.

India has always been sympathetic to the Palestine cause even as it had tried to play a fine balancing act vis-a-vis Israel-Palestine issue. It wants a lasting solution on the issue with the two nations existing independently side by side. India did not recognise Israel initially as it sought its UN membership in 1948. Diplomatic relations were established with that country officially only in 1992.

On the other hand, India had supported Palestine efforts to gain UN recognition. India was convinced that the Palestinian people were the victims here. It had faced its own partition in 1947 on ostensibly religious lines and knows that without a peaceful settlement things are only going to worsen. Israel had been repeatedly proven aggressor and used disproportionate force upon the Palestine people.

India’s stand on the issue had lately alternated. The stronger US embrace in Indian diplomacy is sighted as a reason for this. However, in the latest UNGA resolution, India voted for the resolution and thus against the US. This, after US, released a statement to members that the US President would take their vote “personally”.

India has taken a bold and right decision here. There is nothing good to be achieved by the unilateral decision by the USA. The world community including US’s staunchest allies did not support the US decision. The problem is not that of the sovereign decision of US to choose where to locate its embassy, it is of the need to respect the UNSC resolutions that have been collectively accepted.

This vote may cause slight discomfort for India as The Israeli Prime Minister Benjamin Netanyahu is set to visit India next month, first by an Israeli Premier after 15 years. It could be hoped that diplomats could deliberate on this and impress upon Israel that there will be no winners if this US decision is put into action. India needs to reiterate the need for status quo until the peace process comes up with an agreement acceptable to both nations as well as the international community.