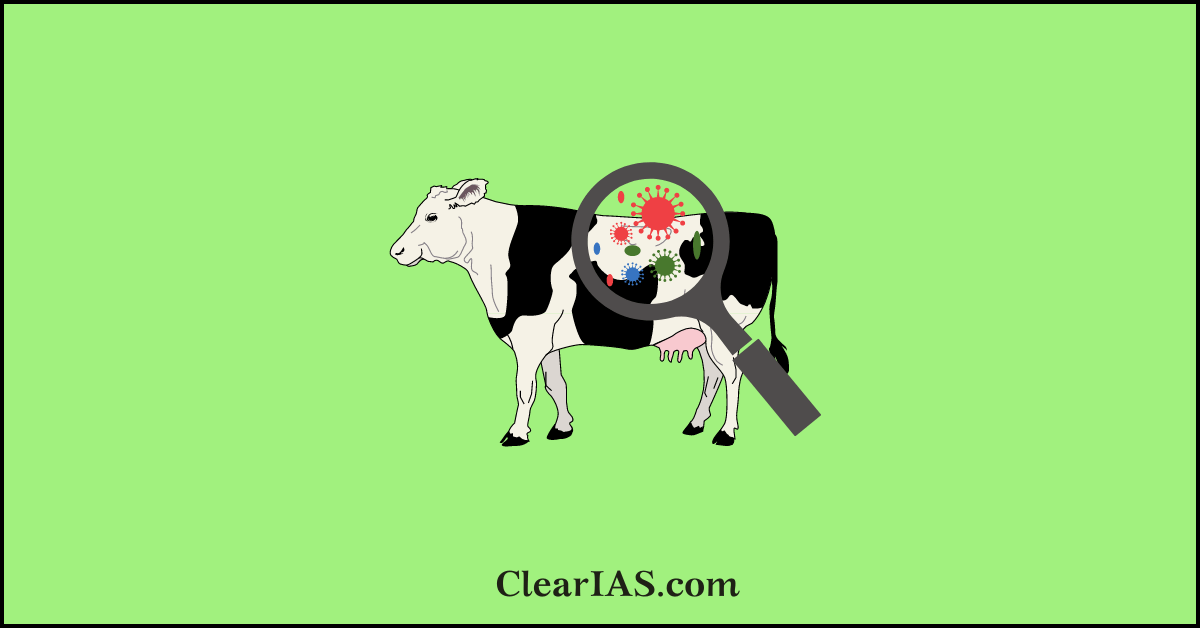 What is Lumpy Skin Disease? How will the spread of the disease affect the diary industry of India? Are there vaccinations for this vector borne disease?

The viral infection has killed nearly 75,000 cattle in India and spread to more than 10 states and UTs.

Does it affect milk we consume? Read to know more about this topic.

What is Lumpy Skin Disease?

Lumpy skin disease is caused by the lumpy skin disease virus(LSDV) which affects the lymph nodes of the infected animal(like Cattles).It belongs to the genus capripoxvirus, a part of the poxviride family.

Do you know what are the other diseases spread by poxviride family?

Smallpox and Monkeypox viruses are also a part of the same family. And the LSDV shares antigenic similarities with the sheeppox virus and the goatpox virus or is similar in the immune response to those viruses.

Is this a Zoonotic virus? No

It is not a Zoonotic virus, meaning the disease cannot spread to humans. It is contagious vector-borne disease spread by vectors like mosquitoes, some biting flies, and ticks and usually affects host animals like cows and water buffaloes.

How does Lumpy Skin Disease spread?

According to the United Nations Food and Agriculture Organisation (FAO), infected animals shed the virus through oral and nasal secretions which may contaminate common feeding and water troughs.

Thus, the lumpy skin disease can either spread through direct contact with the vectors or through contaminated fodder and water. Studies have also shown that it can spread through animal semen during artificial insemination.

LSD affects the lymph nodes of the infected animal, causing the nodes to enlarge and appear like lumps on the skin, which is where it derives its name from. The cutaneous nodules, 2–5 cm in diameter, appear on the infected cattle’s head, neck, limbs, udder, genitalia, and perineum. The nodules may later turn into ulcers and eventually develop scabs over the skin.

What are the other symptoms?

What is the Geographical distribution?

The Lumpy Skin Disease was first observed in Zambia in 1929, subsequently spreading to most African countries extensively, followed by West Asia, South-eastern Europe, and Central Asia, and more recently spreading to South Asia and China in 2019.

As per the FAO, the Lumpy Skin Disease is currently endemic in several countries across Africa, parts of the West Asia (Iraq, Saudi Arabia, Syrian Arab Republic), and Turkey.

The spread in South Asia first affected Bangladesh in July 2019 and then reached India in August that year, with initial cases being detected in Odisha and West Bengal.

The FAO points out: “The long porous borders between India, Nepal and Bangladesh allow for a significant amount of bilateral and informal animal trade, including cattle and buffaloes.”

This, the UN body says, may have contributed to the spread of LSD in July-August 2019 between Bangladesh and India. While the 2019 outbreak later subsided, the recent spread in India began in June this year.

Is it safe to consume the milk of affected cattle?

The spread of the lumpy skin disease can lead to “substantial” and “severe” economic losses according to FAO and the World Organisation for Animal Health (WOAH).

Lumpy Skin Disease: Why India is at higher risk?

How bad is the current spread in India?

The affected States have put movement bans in place and are isolating infected cattle and buffaloes, spraying insecticides to kill vectors like mosquitoes, with some affected States such as Maharashtra, Rajasthan, Delhi, and Uttar Pradesh also setting up dedicated control rooms and helpline numbers to guide farmers whose cattle have been infected.

The FAO has suggested a set of spread-control measures for LSD, which involves:

In a major breakthrough, two institutes of the Indian Council of Agricultural Research (ICAR) have developed an indigenous vaccine for LSD, which the Centre plans to commercialise and roll out in the next three to four months.

The vaccine is based on LSD virus samples from cattle in Ranchi afflicted in the 2019 outbreak and experimental trials conducted on animals afflicted in the ongoing 2022 outbreak with the vaccine have revealed encouraging results, ICAR and the Ministry of Agriculture have stated.