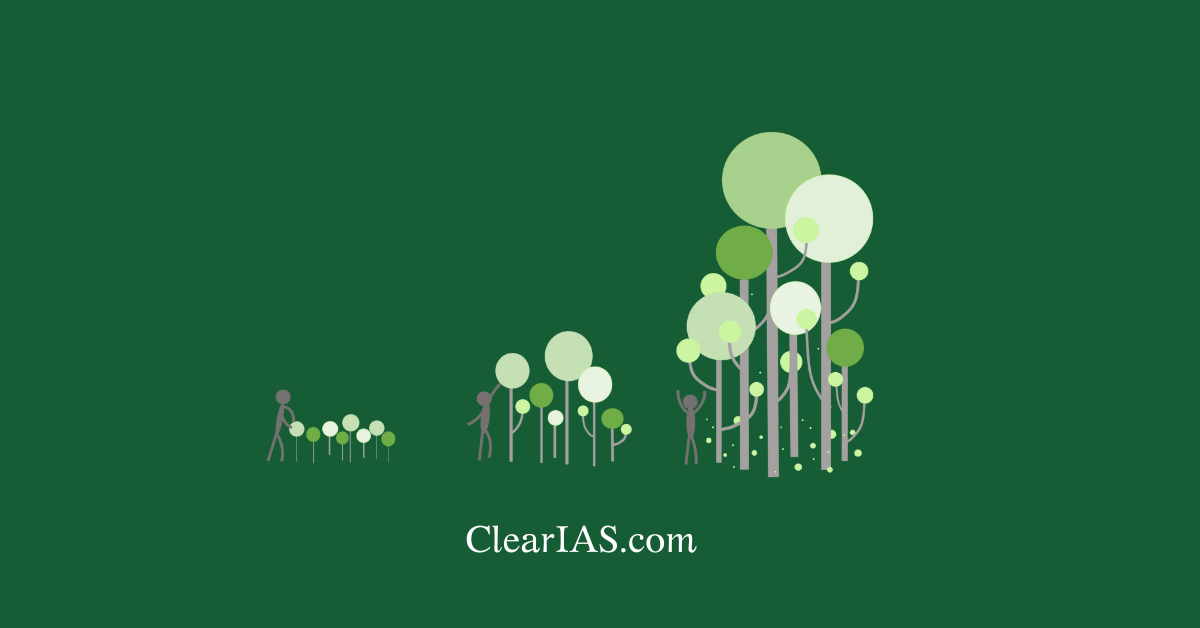 The Miyawaki method is an innovative solution that allows us to create mini forests in cities with scarce land.  Read here to know the details.

Many economies gave up acres of their lands in their drive for greater profit to further industrialisation and improved infrastructure.

However, without a healthy natural ecosystem and a green environment, no economy can sustain for very long.

In this hour of extreme climate change and global warming, we have to adopt a solution-based approach.

The greatest way to achieve these things is by afforestation.

Urban afforestation is the need of the hour.

Can urban backyards be turned into miniature forests?

The Miyawaki technique is such a method for urban forestation.

What is Miyawaki Technique?

A human-planted forest takes typically at least 100 years to reach maturity when left to nature’s methods. Utilizing an accelerated process, the Miyawaki method of plantation creates a miniature forest environment. When growing forests on tiny landholdings, the Miyawaki approach and related techniques are incredibly effective.

Who founded this method? 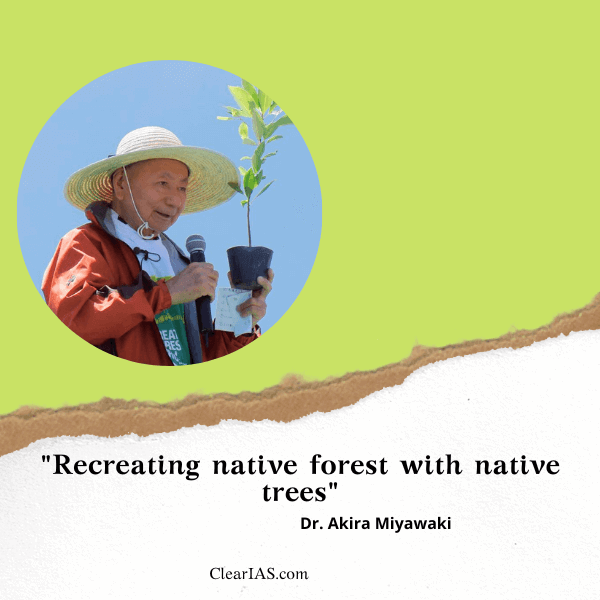 Miyawaki Technique is based on the practices of Japanese forester Akira Miyawaki, a Japanese botanist, and an expert in the study of Natural Forest and the Restoration of Natural Vegetation.

He had expertise in plant ecology and developed the technique of plantation back in the 1980s in which a variety of plants are sowed within a small distance i.e 3-4 plants/sq. meter.

It created a denser forest with a mixed variety of plants in a small area and within a short time.

Saplings of native tree varieties are collected. Saplings preferably grown in pots or grow bag which has nutrient-rich soil is selected to be transplanted onto the demarcated forest patch.

Digs of one-meter depth are dug and fillers like compost, cocopeat, groundnut shells, beneficial micro-organisms and shredded leaf litter are added to enhance the soil.

Once the soil is treated, the saplings are placed into the digs.

The trees need to be watered every day (or as frequently to ensure that the soil surface does not dry out). The frequency of watering is reduced in the coming years.

Wooden sticks are inserted as support and the saplings are tied to the stick. It helps saplings to grow straight and protects them from bad weather conditions.

The soil is covered with organic matter, and growers typically spread out hay or leaf litter to create a blanket layer to protect the soil from direct sunlight, slow the rate at which soil moisture is lost, and promote the growth of beneficial biodiversity. Leaf litter also slowly decomposes, which improves the health of the soil.

Visits to the forest patch frequently to check the saplings’ health, identify and get rid of weeds, spot any infections and cure them. This action exponentially raises the likelihood that all saplings will survive and the forest will swiftly take root.

Natural forests function in a different cycle. Forests are made up of more than just trees. It is home to a variety of plants, fungi, wildlife, and microorganisms. This flora and fauna community plays an important role in sustaining the forest and allowing it to thrive. Birds disperse seeds into the forest, animal dung nourishes the land, leaf litter from fallen trees is broken down by decomposers to create healthy soil, and plant roots hold the soil in place.

The Miyawaki method gives a stepwise procedure for restoring native forests. The care given during the initial years of planting ensures that the majority of the saplings planted survive and the forest ecosystem is established in a fraction of the time taken for forests to develop naturally.

Undisturbed land which has no human influence will naturally help to grow plant communities. This natural potential is greatly harmed by human activities that damage soil structure, nutrients and beneficial biodiversity.

To address today’s environmental issues, this technique for quickly growing dense forest plants would be quite helpful. To preserve life on the plant and repair harm caused by humans, it is seen as essential to preserve biodiversity and native plants, decrease extinction rates by building habitats, enhance environmental quality overall by expanding forest cover, and use trees as a buffer against natural calamities.

The Miyawaki Method is one of the most effective tree planting methods for creating forest cover quickly on degraded land that has been used for other purposes such as agriculture or construction. It is effective because it is based on natural reforestation principles, i.e., using trees native to the area and replicating natural forest regeneration processes.

The Miyawaki technique is a potential candidate for attaining objectives to improve world habitability and safeguard ecologically vulnerable areas. A “new option” of coexistence, in which urban areas and forest environments coexist, may be made possible by small, dense forests. These small clusters of forest gradually turn into a massive area. It is also a useful tool in Urban Forestry projects and the development of recreational parks. This area can also be converted as a sanctuary for non-humans in cities and towns.

The technique can help restore groves that have been destroyed by deforestation since groves are important for maintaining local biodiversity and controlling environmental health. They can also reduce soil erosion and can also control the force of water and wind.

In Miyawaki forest the seedlings are planted at very high densities. This replicates the regeneration process that occurs in a natural forest. The saplings grow very fast to compete for the light and then natural selection will favour the fastest growing individuals resulting in a densely packed pioneer forest that grows in 20 to 30 years instead of taking 150 to 200 years benefiting from projects that are working to maximise a forest’s carbon sequestration potential or recreate habitat for biodiversity and wildlife.

The stress is now to create forests that grow quickly, contain dense vegetation, and require little to no time for management.

Miyawaki forests often require less initial cost of funds, which may include installing a watering system, labour costs for planting and the first few years of development, the price of saplings, and the price of soil additives. The establishment of several prosperous Miyawaki farms in Kerala cost between ten and twenty lakh.

In the long run after the initial period of growth, investment requirements are little to none. Additionally, the growers can increase the economic value of their forests by incorporating high-value native timber trees and creating “Miyawaki Fruit Forests”, by providing forest tours, nature walks and educational sessions.

In this Miyawaki technique trees are planted, and they develop much more quickly, accelerating the process of creating forests and absorbing more carbon. The best part of the technique is that after three years saplings become maintenance-free or self-sustainable Miyawaki woods have been shown to have higher biodiversity than nearby woodlands, making them an excellent choice for rapidly establishing diversified forest ecosystems. Being capable of rapidly establishing diverse, healthy forests could be crucial in fulfilling international targets and addressing these concerns in light of the current climate change emergency and alarming warnings about worldwide biodiversity loss.

The “Miyawaki method” is well known for the: