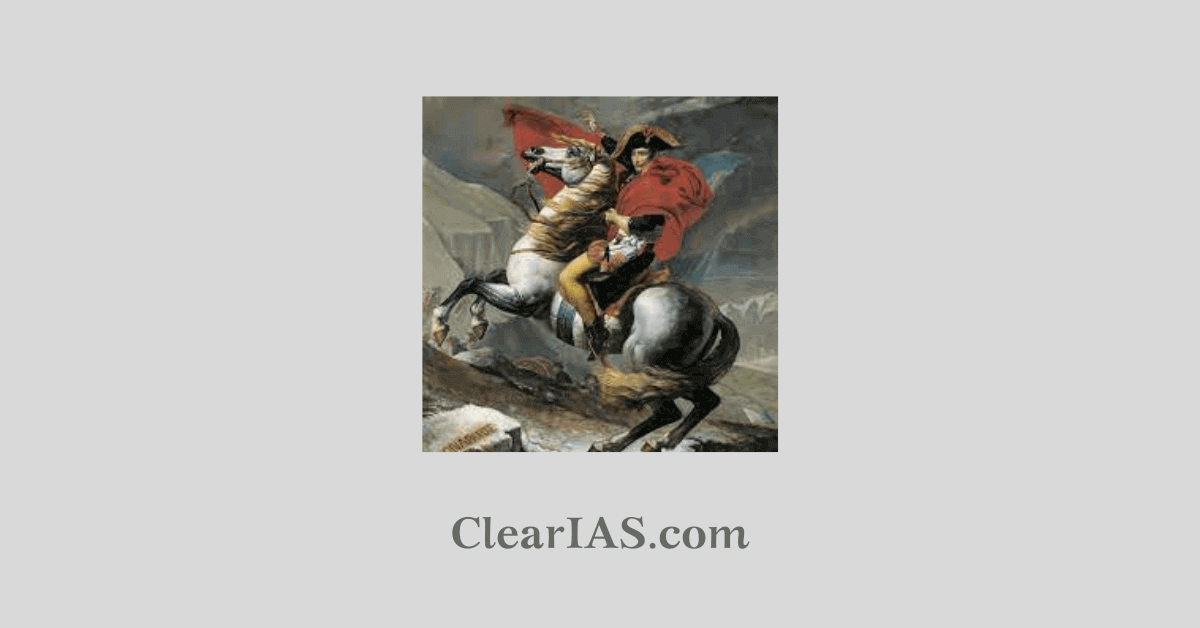 Who was Napoleon Bonaparte? What was his role in the French Revolution? How did rise to control most of Europe? Read here.

Napoleon is remembered today for his role in the Napoleonic Wars (1803–15) and his infamous defeat at the Battle of Waterloo on 18 June 1815.

The early life of Napoleon:

Napoleon was born on 15th august 1769 on the island of Corsica in the Mediterranean Sea after its annexation by the Kingdom of France. He is also known as Napoleon I.

He completed his schooling in the mainland of France later joined the military academy.  He was bullied as a child by his peers and hence spent a lot of time alone with books. This made him well acquainted with history and geography.

He graduated from military school in 1785 and was commissioned as the second lieutenant of an artillery detachment in the French army.

Though he was a staunch supporter of Corsican nationalism, he eventually embraced the ideals of the French revolution which started in 1789 when he joined the Jacobins, the pro-French Corsican Republicans.

He rose through the ranks in the military during the French Revolution by suppressing the uprisings against the revolutionary government.  He was promoted to the rank of major general as a result.

Napoleon fought in the French revolutionary wars and against other European monarchies since 1792.

Battle of Nile (1798): He led a French expedition to conquer Egypt which was a British Protectorate then. Even though the French won the first battle of pyramids, they were wiped out in the next Battle of Nile.

He also led another failed expedition to invade Syria in 1798 which was a part of the Ottoman Empire.

The coup of 18 Brumaire, 1799: The Directory, a five-member group that governed France since the Reign of Terror ended in 1795. With the political situation deteriorating, Napoleon became a part of the coup that overthrew the directory.

Battle of Marengo, 1800: Napoleon led the French to a sounding victory against the Austrians. This victory made Napoleon the first consul of the three-member group called the consulate that rules France.

Napoleon I, the Emperor of France:

The constitutional amendment of 1802 made Napoleon the first consul for life, which was nothing less than a dictator. And then later in 1804, he crowned himself the emperor of France in an elaborate ceremony in the Notre Dame cathedral.

These were a series of wars fought between France and a coalition of European powers.  The peace Napoleon had negotiated in 1802 was short-lived as by 1803 Britain had resumed war with France and they were later joined by Russia and Austria.

Battle of Trafalgar (1805): Britain’s naval victory at Trafalgar forced Napoleon to abandon his plans to invade England, and he turned his attention to Austro-Russian forces, which he defeated at the Battle of Austerlitz later that year in one of his greatest victories.

To defeat his British rivals through economic means, Napoleon came up with the Continental System in 1806, which blockaded European ports from British Trade. This combined with consequent victories over Russian and Austrian forces reinforced napoleon’s fame as a great general.

Napoleon gained new territories in the following years which gave him control of much of Europe. The Holy Roman Empire was ended, and Napoleon’s relatives and loyalists were appointed as reigns in Italy, Naples, Spain, and Sweden, along with the Confederation of the Rhine, the new territories created by Napoleon.

He tried to restore stability by centralizing the government and introducing reforms in education, banking, encouraging arts and sciences.

He married Josephine, a 32-year widow at the age of 26, though he later annulled the marriage as it was childless. He later married Marie-Louise, the 18-year-old daughter of the emperor of Austria. She gave birth to a son, Napoleon II (who later became the King of Rome) the following year.

Discontent among the public: The French Revolution aimed to end the monarchy in which Napoleon played a big role. But when later he crowned himself the emperor of France, the public became wary of his ways.

The Continental system devised by him to blockade British trade wasn’t very successful and in the end, backfired.

Peninsular War (1807–1814): It was the war between coalition Spain, the United Kingdom, and Portugal against the invading and occupying forces of France for control of the Iberian Peninsula during the Napoleonic Wars. Napoleon was defeated here.

Napoleon’s forces were again defeated in 1813 during the Battle of Leipzig by a coalition force of Austrian, Prussian, Russian, and Swedish troops. He was forced to abdicate his throne when the coalition forces captured Paris.

He was exiled to the island of Elba off the coast of Italy while his wife and son were sent to Austria.

On February 26, 1815, Napoleon escaped to mainland France, where he was welcomed to Paris by cheering crowds. He began a campaign to regain the lost French possessions in Europe. He governed France for what is known as the ‘Hundred days’ reign.

The French Army invaded Belgium in 1815 to defeat a combined British and Prussian army. The Prussians were defeated at Ligny.

On June 18, the French were badly defeated by the British under the command of Duke of Wellington, Arthur Wellesley, with Prussian support at Waterloo. The battle permanently ended Napoleon’s threat in Europe.

In June 1815, Napoleon was dethroned once again.

The British kept Napoleon on the island of Saint Helena in the Atlantic Ocean, 1,870 km (1,162 mi) from the west coast of Africa.

They also took the precaution of sending a small garrison of soldiers to both Saint Helena and the uninhabited Ascension Island, which lay between St. Helena and Europe to prevent any escape from the island.

The probable cause of his demise is said to be stomach cancer, although it was speculated that he was poisoned.

In 1840 his remains were returned to France and given a state funeral.

Napoleon was the child of the French Revolution. Comment. (250 words)