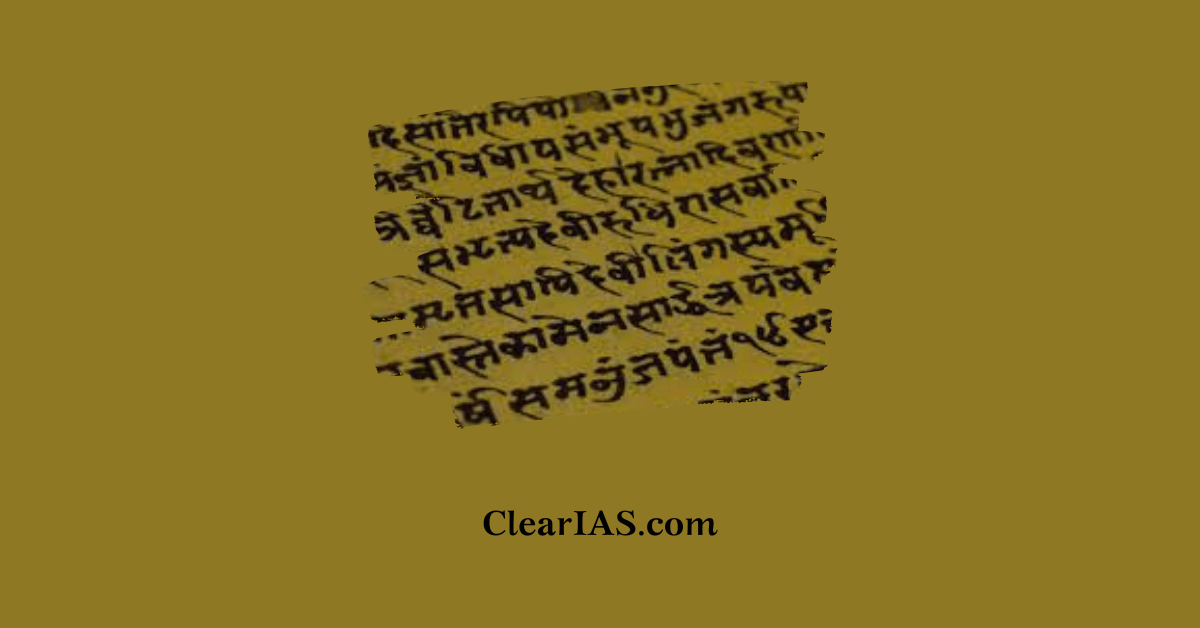 Sanskrit is well known as the traditional language of Hinduism and Brahmanism. It not only involves religious scriptures and also covers secular and technical science and arts.

This article will explain to you how the Sanskrit language flourishes in India’s ancient literature.

The Sanskrit language was used as a dialect by the ancient Indo-Aryans in the year 2000 BCE.

It is a branch of the larger Indo – European Family which came to India with the advent of the Aryans. It is the largest language group in India and around 74 percent of Indians speak languages belonging to this group.

This language group is again divided into three sub-groups depending upon the time period of their origin.

The ancient form of Sanskrit is what is found in the Vedas.

Even the Upanishads, Puranas, and Dharmasutras were all written in Sanskrit.

It can be said that Sanskrit is the mother of many Indian languages. The understanding of the diversity and richness of our culture has been made possible due to the development of the Sanskrit language during those times.

It is the most ancient language of our country and is one of the 22 scheduled languages listed in the Constitution.

Sanskrit is the only language that transcended the barriers of region and boundaries. From north to south and from east to west, there is no part of India that has not contributed to or has not been affected by the Sanskrit language.

The chaste form of Sanskrit developed between 300 to 200 BC and was a refined version of Vedic Sanskrit.

The first evidence of the use of Sanskrit can be found in the inscriptions of Rudradaman at Junagarh in the present Southern Gujarat region.

However,  The Gupta period when the use of Sanskrit in poetries can be traced. This is totally a period of creation of pure literature which is evident in works such as Mahakavyas ( epics ) and Khandakavyas (semi-epics).

In the field of Sanskrit literature, The Gupta period is known as the period of unique creation because a variety of literary works developed during this reign.

Another important aspect of it is related to the ornate style in literary works. Many of the plays developed during the Gupta period were also written in Sanskrit.

Most of the literature in Sanskrit has been divided into the Vedic and Classical categories.

The two epics: Mahabharata and Ramayana are also part of the classical category. Irrespective of their centrality to the Hindu religion, these epics can also be considered to be the pre-cursors of Sanskrit Kavya ( epic poetry ), nataka ( classical drama ), and other treatises on medicine, statecraft, grammar, astronomy, mathematics, etc.

Most of this Sanskrit literature was bound by the rules of grammar that have been explained brilliantly in Panini’s Ashtadhyayi, a treatise on the rigid rules which bind the Sanskrit language.

The only surviving foundational and analytical source of Sanskrit grammar, Ashtadhyayi (literally, “eight chapters”), was written by Panini and is believed to have been published in the 4th century BCE.

Despite the fact that India has more than 5000 spoken languages, everyone agrees that Sanskrit is the only sacred language and the source of all known sacred literature. The standardization of the language, which is still used in various forms now, was done by Panini.

One of the most popular genres of lyric poetry and prose is the popular romantic tales whose sole purpose was to entertain the public or Lokaranjana.

The rules regarding performance, acting, gestures, stage direction, and acting have been illustrated in the Natyashastra by Bharata.

Major dramas written during the ancient period are:

This genre is also called Kavya or poetry.

Unlike the drama section where the story is the main focus of the text, poetry concentrates more on the form, style, figure of speech, etc.

One of the greatest Sanskrit poets is Kalidasa who wrote Kumarasambhava ( the birth of Kumar or Kariya, the son of Shiva and Parvati ), and Raghuvamsa ( the dynasty of the Raghus ).

One should not forget to mention the contribution of poets like Harisena who wrote during the Gupta period.

He wrote several poems in praise of the valor of Samudra Gupta and it was so well appreciated that it was inscribed on the Allahabad pillar.

Another extremely popular Sanskrit poet was Jayadeva who wrote Gita Govinda in the 12th century. It concentrates on the life and escapades of Lord Krishna. The text combines elements of devotion to Lord Krishna, his love for Radha, and the beauty of nature.

Several books were written about the sciences and state governance in Sanskrit.

Historians argue that between 500 to 200 BC, several major books on law were written and compiled, which are called the Dharmasutras. These were compiled alongside the smritis that are known as Dharmashastras.

These are the basis of the laws governing the subjects of most of the Hindu kingdoms. These not only elucidate the rules according to which property could be held, sold, or transferred but also elaborate on the punishments for offenses ranging from fraud to murder.

Which defines the role of men and women in society, their interaction at a social plane, and the code of conduct that they were supposed to follow.  The Manusmriti might have been written and compiled between 200 BC and 200 AD.

One of the most famous texts about statecraft from the Mauryan period is Kautilya’s Arthashastra.

It concentrates on the economic and social conditions of the Mauryan empire.

The due focus was also given to the military strategy which should be employed by the State.

The text mentions that ‘ Kautilya ‘ or ‘ Vishnugupta ‘ wrote it. Historians argue both these names were an alias for Chanakya who was a learned scholar at the court of Emperor Chandragupta Maurya.

The contribution of Sanskrit to Buddhism

Some Buddhist literature belonging to Mahayana and the Hinayana school is even written in Sanskrit.

The book Mahavastu of the Hinayana School is a treasure of stories and written in mixed Sanskrit, Pali, and Prakrit.

Sanskrit has a long and revered history that is commonly linked to worship and devotion. It started out as a Vedic language, and it has been modified over time as a result of different interpretations, precise grammar, and the complexity of its application.

Which many people have shied away from because of its indomitable scope and depth.

Many ancient books and manuscripts are translated from Sanskrit today despite its extensive vocabulary and complex grammar and prose because no other language can offer such a lavish literary grasp of the past while yet acting as a vehicle for faultless human expression.