Scramjet Engine is making headlines these days. The successful testing of Scramjet engine designed by ISRO represents a major milestone in India’s future space programs. But what is a Scramjet Engine?

What is a Scramjet Engine? 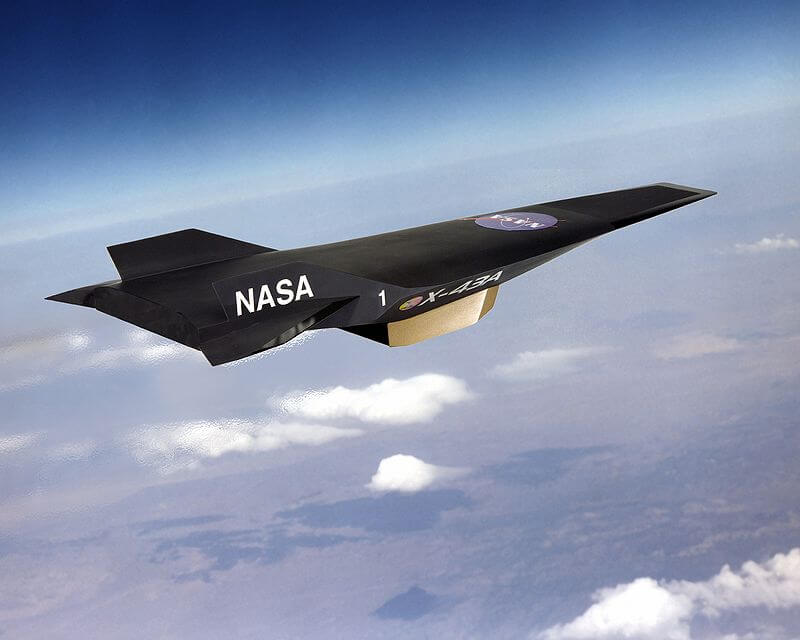 To make it simple, a scramjet is a supersonic combusting ramjet). This is a variant of a ramjet jet engine in which combustion takes place in supersonic airflow.

As Scramjet is essentially a Ramjet with variations, it would be easy if we start our learning process from Ramjet. Let’s first start with the basics – the difference between a jet engine and rocket engine.

What is the main difference between a Jet and Rocket engine?

The main difference is that a rocket carries its own supply of oxygen (Oxidizer Tank) for combustion while a jet engine utilizes oxygen from the atmosphere for combustion. This makes rocket engine less energy efficient when compared to Jet engines.

A jet engine is a machine that converts energy-rich, liquid fuel into a powerful pushing force called thrust. The thrust from one or more engines pushes a plane forward, forcing air past its scientifically shaped wings to create an upward force called lift that powers it into the sky.

The first operational Jet Engine was developed by Hans von Ohain of Germany. But the credit for its discovery got to Great Britain’s Frank Whittle (1930).

The main processes in a Jet Engine

A Jet Engine has 3 main processes:

It increases the pressure of the air trapped inside the chamber.

It increases the temperature of the air-fuel mixture by releasing heat energy from the fuel.

It increases the velocity of the exhaust gases, thereby powering the vehicle.(Newton’s third law of motion) 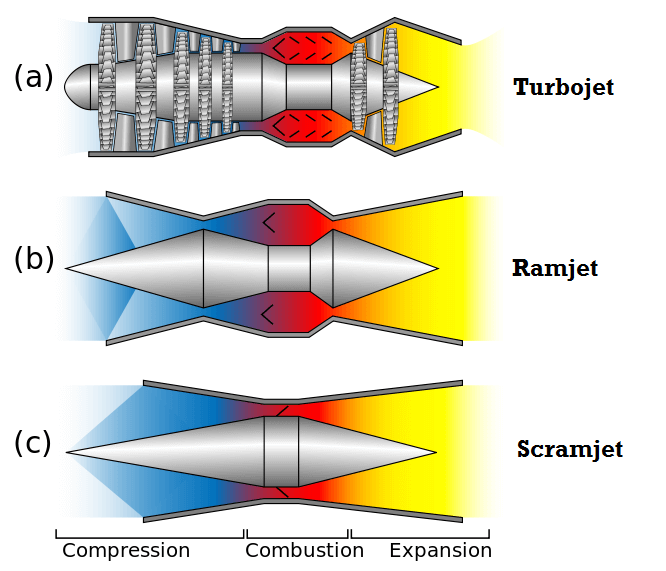 All jet engines and gas turbines work in broadly the same way. Hence they all share five key components: an inlet, a compressor, a combustion chamber, and a turbine (arranged in exactly that sequence) with a driveshaft running through them. Even though they have similarities, jet engines differ in their extra components. The main types of Jet engines based on how air is compressed in the engine are as below:

Turbo jet engine is an air-breathing jet engine. This is one of the most common types of jet engines. It is still widely used in airplanes.

Turbofans differ from the turbojets in the way they have an additional component – a fan. The fan sucks in the air and then further gets compressed and combustion takes place in the burner.

High-speed forward motion is used to compress the air (no compressor). Fuel is injected into the combustion chamber where it mixes with the hot compressed air and ignites. The average speed of Ramjet is 3-6 Mach. But the ramjet efficiency starts to drop when the vehicle reaches hypersonic speeds.

Here also, the high-speed forward motion is used to compress the air (no compressor), but it is an improvement over the ramjet engine as it efficiently operates at hypersonic speeds and allows supersonic combustion. Speed is greater than 6 Mach (Six times the speed of Sound).

Type of jet engine where a ramjet transforms into scramjet over Mach 4-8 range, therefore, it can operate both in subsonic and supersonic combustion modes.

India had started the efforts on Scramjet technology long back and we did a ground testing in 2006 which validated the design of the engine. And now, India became the fourth country to claim the successful testing of Scramjet Engine. Russia was the first country who claimed scramjet flight test in 1991, and later US and European Space agency also joined the elite group.

The importance of having this technology

Avatar (from “Aerobic Vehicle for Transatmospheric Hypersonic Aerospace TrAnspoRtation”) is ISRO’s reusable launch vehicle platform which is capable of carrying out satellite launches like normal aircraft, takes off vertically and lands back on a runway. It is designed to use ramjets and scramjets for thrust. Each of these engines will be used in different stages of the flight wherein scramjets are used at hypersonic speeds.

In a nutshell, development of Scramjet engines is an important milestone in ISRO’s endeavor towards its future space transportation systems. Air breathing propulsion is a solution for a powered long return cruise flight necessary for reusable launch vehicles. In addition to this, DRDO has been working on to develop Brahmos II Cruise Missile based on the same scramjet technology. This calls for the faster development of ramjet or scramjet technologies which would help India to execute advanced space missions in future. Also, it will add colors to our much hyped Make In India initiative.