The world’s second-biggest exporter of sugar, India has emerged as the top producer, user, and exporter of sugar globally. Are you aware of the current scenario the Indian Sugar industry facing today? Read the article to know more about it.
India’s second-largest agro-based business after cotton is the sugarcane and sugar industry.

50 lakh hectares or 2.57% of the total planted area are taken up by the crop.
Around 50 million farmers grow sugarcane, and there are 5 lakh workers in sugar mills.

But still, the Indian sugar industry faces many challenges. Let us discuss more on that.

The cheapest sources of energy, which account for 10% of daily caloric intake, are sugar and jaggery. There are about 27 million tonnes of domestic demand annually. In addition to producing sugar, sugarcane is also used to make ethanol.

Sugarcane, a bulky and perishable product, is the foundation of the Indian sugar industry. It cannot be kept for an extended period of time since the sucrose content is lost. Therefore, the companies are positioned close to the sugarcane growing regions to assure a steady supply of sugarcane and to lower transportation costs.

The industry is growing in part due to entrepreneurship. In UP, private sugar mill ownership is common. The remaining sugar mills are owned jointly by the farmers and operated as cooperatives. Maharashtra is home to many sugar mills with this type of ownership. 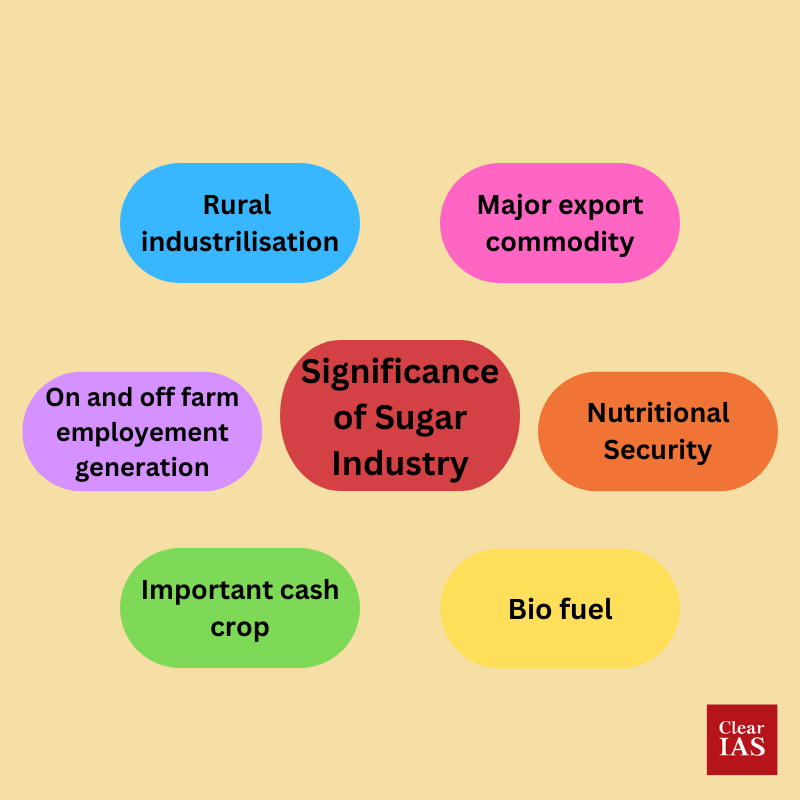 Mills are required by law to compensate farmers for the cane they purchase at a price set by the government.
The recovery of sugar from the cane is the foundation of FRP. (Indicated as a percentage, sugar recovery is the ratio of sugar produced to cane crushed.)A few state governments also publish State Advised Prices (SAP) that are higher than FRP.

Farmers within a predetermined radius, known as the Cane Reservation Area, must supply their harvests to sugar mills that buy sugarcane.

The government established a sugar buffer stock to help the industry deal with the issue of excess output and low sugar prices.
The buffer stock of sugar is collectively kept by the mills themselves, as opposed to the buffer stocks of wheat and rice, which are managed by the government through FCI.

Desegregation of the sugar industry

In 2013, the sugar industry underwent some deregulation based on the committee’s recommendations, which were made under the direction of Dr C. Rangarajan. Levy on sugar and restrictions on open market sales were subsequently eliminated.

Both the soft loan programme and the Scheme for Extending Financial Assistance to Sugar Undertakings (SEFASU 2014) offered working capital loans with interest subventions. To stimulate sugar export, financial aid was given to sugar mills to cover the cost of internal transportation, freight, and other expenses.

Nutrient management tools developed by ICAR-SBI, Coimbatore, such as the Cane Advisor, are available as mobile applications.
The Government of Uttar Pradesh created the Sugarcane Information System (SIS) to simplify post-harvest tasks like sales and procurement.

In order to promote environmentally friendly fuels (by increasing the use of ethanol) and decrease energy imports, the Ethanol Blended Petrol (EBP) programme was established. The EBP programme creates a steady market for ethanol, which injects cash into the sugarcane industry.

By allowing the use of sugarcane juice and other sugar-containing materials like sugar beet and sweet sorghum, among others, the Policy broadens the range of raw materials available for the manufacturing of ethanol.

Challenges faced by the Sugar  Industries

Sugarcane pricing must be connected to sugar prices in order to prevent the issue of arrears and maintain the sugar industry’s financial stability. In order to safeguard farmers from receiving prices below the FRP, the Revenue Sharing Formula (RSF) must be implemented along with a Price Stabilization Fund.

Development Fund for Sugar and Sugarcane

Charges on sugar may be used to create a special fund that would help the mills’ ability to pay their bills. Encourage the production of ethanol by providing the necessary support to help integrate and update technology and by learning from the Brazilian experience of directing raw sugarcane juice towards the blending of ethanol.

Implement the important recommendations of the Rangarajan committee

The State Governments are in charge of implementing and enacting a number of the committee’s recommendations on the CRA and the Cane Price Formula. However, the majority of states have not done anything about this. The federal government should push the states to follow these suggestions.

Efforts should be made to use drip irrigation in place of flood irrigation. In addition to ongoing awareness-raising efforts, farmers may benefit from several incentive programmes that grant them preferential access to infrastructure.

By offering farmers the right incentives, it is necessary to change the cropping pattern in water-stressed areas where sugarcane is grown

Encourage product variety by offering sugarcane mills incentives to recycle bagasse and implement cutting-edge technology for the production of jaggery.