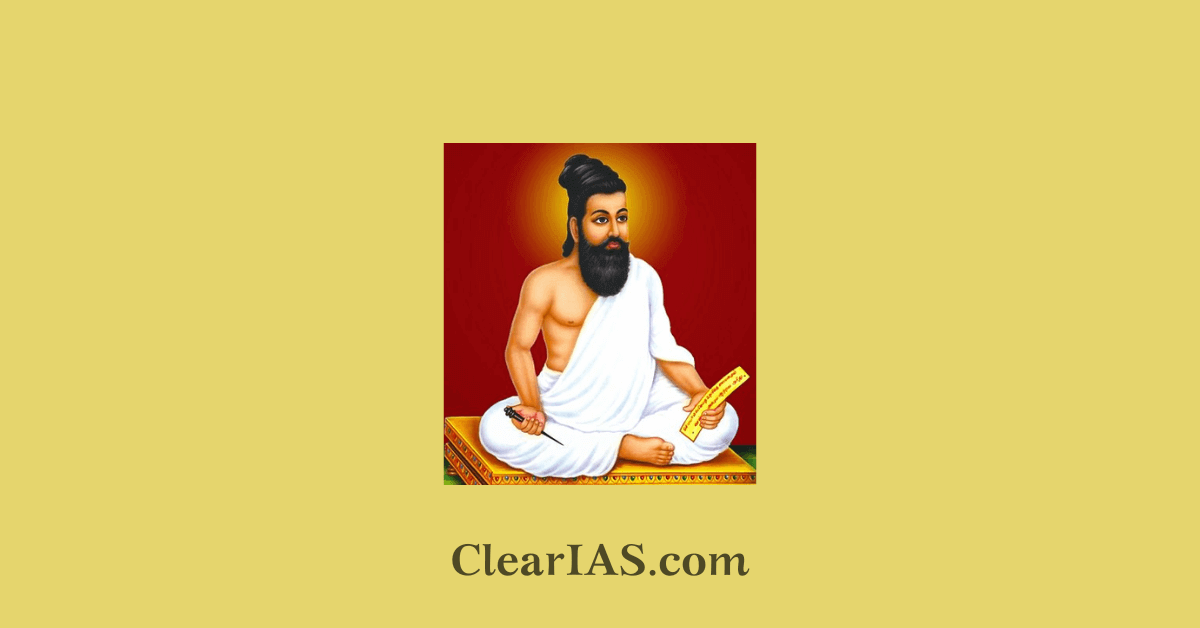 Thiruvalluvar is one of Tamil culture’s most notable literary figures. Thirukkural, the most significant work of Tamil literature, is his creation. He lived during the Sangam era of Tamil classical culture. He is renowned as a poet, philosopher, and wise man. Read here to know more about his life and works.

Thiruvalluvar was one the great poet-philosophers of the Indian subcontinent during the Sangam period.

Sangam is a collective term for an academy of eminent poets. The earliest Tamil literature that has survived is called Sangam literature. The earliest of these poems date back more than 2,000 years.

The majority of academics believe that these Sangam poems were written between 300 BCE and 300 CE.

According to legend, the Pandian kingdom was home to all three of the Sangam institutions.

By the second millennium CE, the Sangam literature was lost to history. The poetry and other writings were fortunately mostly preserved as palm leaf manuscripts in Tamil academic houses and Shaiva Aatheenams close to Kumbakonam.

Before the palm leaves deteriorate, which takes around 50 years, replacements must be made by writing them down on fresh palm leaves.

In the nineteenth century, all of that changed.

In 1812, Thirukural was edited and printed from manuscripts by Francis Whyte Ellis. He was working as a Collector in the Madras Presidency when he published the Thirukural created by Thiruvalluvar.

Thiruvalluvar, also known as Valluvar, was a well-known Tamil philosopher and poet. His most famous work, the Tirukkural, is a collection of couplets addressing morality, politics, the economy, and love. The book is regarded as a unique and highly esteemed piece of Tamil literature.

According to Kamil Zvelebil, a specialist in Tamil literature, there is essentially no reliable information accessible regarding Valluvar. Different biographers have drawn different conclusions about his life and likely background from his literary works.

His family history, religion, or location of birth are all unknown certainties. According to traditional narratives and linguistic examinations of his texts, he is thought to have resided at least temporarily in the town of Mylapore, which is a neighborhood of modern-day Chennai.

His floruit is variously dated from the 4th century BCE to the early 6th century CE. Valluvar was born in 31 BCE according to Maraimalai Adigal, but according to Kamil Zvelebil, the ideal time to date the Thirukkural and Thiruvalluvar are between 500 and 600 CE.

In January 1935, the Tamil Nadu government officially recognized 31 BCE as the year of Valluvar.

Valluvar is generally thought to have belonged to either Jainism or Hinduism. Hinduism, Jainism, and Buddhism were the three religions that flourished in the Indian subcontinent during the time of Valluvar.

Thiruvalluvar was an accomplished poet and administrator in addition to his work in philosophy, for which he is best known.

Tirukkural or Kural is the primary work credited to Thiruvalluvar. It contains 1330 couplets, which are divided into 133 sections of 10 couplets each.

It is considered one of the greatest works on ethics and morality, and it is known for its universality and secular nature.

It places a strong emphasis on moral vegetarianism and nonviolence as personal characteristics.

Along with a broad range of social and political subjects like the king, ministers, taxes, justice, forts, war, the greatness of the army and the honor of soldiers, the death penalty for the wicked, agriculture, education, and abstention from alcohol and intoxicants

Chapters on household life, friendship, and love are also included.

The Tirukkural text has been translated into several Indian and international languages. It was translated into Latin by Constanzo Beschi in 1730, which helped make the work known to European intellectuals.

Thiruvalluvar’s straightforward yet profound insights into human nature are what made his teachings so timeless.

He offers insightful guidance on how to live a decent life while delving into a number of topics, including love, wisdom, justice, and renunciation.

Thiruvalluvar’s philosophy stresses the importance of ethics and places a strong emphasis on self-discipline, honesty, and equality.

Valluvar is revered and highly regarded in Tamil culture, which is evident in the nine different names that his writings have been given: Tirukkural (the sacred kural), Uttaravedam (the ultimate Veda), Thiruvalluvar (named after the author), Poyyamoli (the falseness word), Vayurai valttu (truthful praise), Teyvanul (the divine book), Potumarai (the common Veda), M (the Tamil Veda).

Throughout the Southern part of India, Valluvar is traditionally revered as a god and saint by numerous people. Many communities revere Valluvar as the 64th Nayanmar of the Shaivite tradition, notably those in Mylapore and Tiruchuli.

In South India, there are numerous temples solely devoted to Valluvar. The temple in Chennai’s Mylapore is the most well-known of these. The temple was constructed in the early 16th century and is situated within the Mylapore Ekambareeswara-Kamakshi (Shiva-Parvati) temple complex.

The Government of Tamil Nadu celebrates the 15th (16th on leap years) of January as Thiruvalluvar Day in the poet’s honor, as part of the Pongal celebrations.