ClearIAS » Geography Notes » Tsunami: Everything You Need to Know 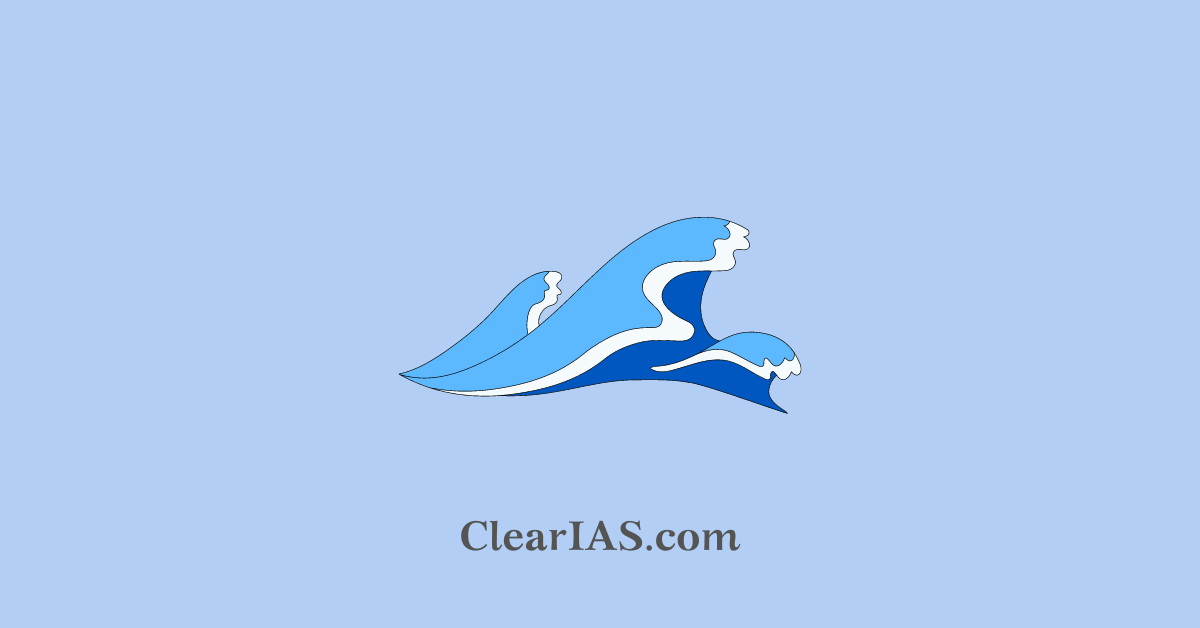 The word tsunami comes from the Japanese words “tsu” for harbour and “nami” for wave.

Based on the High-Powered Committee on Disaster Management’s report (2001), the term “tsunami” refers to an ocean wave that is caused by an ocean event, such as an earthquake, landslide, or volcanic eruption.

A tsunami is not just one wave; rather, it is a sequence of waves brought on by geological processes occurring near or below the ocean’s surface.

These waves have the potential to grow to tremendous sizes.

Several factors and incidents can lead to the formation of tsunamis, a few important of them are-

Although landslides, volcanic eruptions, or even the impact of a sizable meteorite striking the water can all result in tsunamis, the most catastrophic tsunamis are produced by massive undersea earthquakes.

These destructive tsunami waves are produced by the vertical movement of the entire water column, and such a situation may arise as a result of sudden, jerky motions of fault blocks on the seabed.

It should be emphasised that horizontal displacement of the sea floor usually does not cause a tsunami.

In addition, not all undersea earthquakes create tsunamis, as it depends upon the nature and degree of displacement of the seawater columns.

Other natural disasters like rock fall, landslides, and icefalls can cause the displacement of seawater which can lead to tsunami waves. These waves rapidly travel away from the source due to the dissipation of energy and create havoc in the nearby coastlines.

When a powerful underwater volcanic eruption occurs, a significant amount of seawater is abruptly displaced, which results in the formation of tsunami waves.

In the event that meteorites and asteroids fall into the water, there is a chance that a tsunami could emerge.

Despite the extreme rarity of such an impact, the researcher gives the destructive potential of a tsunami brought on by a near-Earth asteroid.

Propagation of the Tsunamis

Tsunamis are made up of a series of extremely long waves that travel away from their point of origin on the ocean’s surface in all directions.

The tsunamis cannot be seen or heard because of their extremely long wavelength and very low amplitude in deep water. Therefore, as the killer waves pass by underneath boats at fast speeds, passengers cannot feel or see the tsunami waves.

As the tsunamis leave the deep water of the open ocean and travel towards the shallow water, they are transformed in two ways.  They first experience a significant reduction in speed, then a massive increase in height.

Residents of coastal areas are in serious danger from tsunamis. They emerge out of nowhere and strike the seashore like a water bomb with enormous, powerful waves that are travelling with great speed.

Tsunami in the Indian Ocean

Multiple times, tsunamis have been caused in the Indian Ocean. On Indonesia’s Java and Sumatra islands in 1883, tsunamis generated by Krakatoa eruptions killed 36,000 people.

Various types of damages caused by the tsunami are briefly described below.

The Andaman and Nicobar Islands in India were the most vulnerable because they were situated closest to the earthquake’s epicentre and the source of the tsunamis.

The coastal regions of Tamil Nadu were the primary targets of the tsunami attack on the Indian subcontinent.

Indonesia and Sri Lanka were the nations that recorded death tolls that were higher than those in India.

As a result of tsunami attacks, property worth millions of rupees gets damaged. Houses, public buildings, transportation systems, and other infrastructure components suffer damage that is practically irreparable.

In the tsunami of 26th December 2004, the coastal regions of India, which include sizable coastal tracts in Tamil Nadu, Andhra Pradesh, Pondicherry, and Kerala, have incurred billions of rupees worth of financial losses, according to preliminary findings of the Indian government.

According to reports, the tsunami on December 26, 2004, many islands’ water levels has risen, causing a number of their beaches to split in two. Indira Point, the southernmost point of the Indian Union, was nearly entirely washed out, reducing the coastline inward.

According to a US Geological Survey, the earthquake’s enormous energy release caused the earth to tilt slightly. According to NASA’s geophysicist Richard Gross, the earthquake may have permanently accelerated the rotation of the planet due to a shift of mass toward its centre.

Vast, low-lying coastal areas were submerged by water, which made the soil more saline and decreases agricultural production. The soil’s extreme salinity renders the field unproductive.

The marine life of the Ocean gets severely impacted by deadly tsunamis.

The coral reefs of the Andaman and Nicobar Islands archipelago were severely damaged or destroyed as a result of the tsunamis that occurred in 2004. It was possible that some of the archipelagic species might get extinct.

The destructive tsunamis caused severe losses in the fishing industry as well.

Large marine mammals including whales, dolphins, and other species were negatively impacted in their breeding, feeding, and other activities.

Oceanic waves known as tsunamis are so strong that it is impossible for humans to contain or control them. However, in the event that tsunamis are approaching, the following advice can be useful.

The most effective strategy to protect vulnerable communities from the wrath of deadly tsunami waves is to provide them with advance notice of impending tsunamis. The common individual will benefit from the following advice in understanding the threat posed by tsunamis.

It is possible to predict the onslaught of tsunamis by studying their speed, wavelength and depth of the sea.  Tsunamis often take some time to reach the seashore from their point of origin because, as they get closer to the shallow sea, their wavelength and speed are drastically reduced.

However, when they get to the shallow coastal seas, their energy is compressed, and they turn into deadly waves that destroy the coastal inhabitants.

Therefore, a timely warning of tsunamis a few hours in advance can prevent the loss of thousands of lives and millions of rupees worth of property.

Unfortunately, India and other Indian Ocean-rim countries did not have tsunami warning systems in 2004 when the deadly tsunamis hit the coasts of the Indian Ocean.

After the catastrophe, India decided to install its own tsunami warning system rather than becoming a part of the Pacific Warning System.

The system comprises a real-time network of seismic stations, bottom pressure recorders (BPR) and tide gauges to monitor earthquakes in the sea and tsunamis triggered by them.

Why the Problem is Consistent

Although tsunamis constitute a natural tragedy and man has hardly any control over such a powerful natural phenomenon yet man’s own misdeeds have made the situation very dangerous and helped in aggravating the fury of tsunamis.

For instance, no building is permitted within 500 metres of the coast. In India, it is required by law to keep this area of land undeveloped, yet many development projects (residential, commercial, recreational, etc.) are still carried out without regard for the law. The population in this region is most susceptible to tsunamis and other maritime dangers.

Mining sand and other minerals from the sea makes the concerned area highly vulnerable to tsunamis. The sand deposited on the sea coast absorbs much energy from the waves and saves much of the coastal areas from their fury. There is an urgent need to check unwanted construction and mining in ecologically sensitive coastal areas.