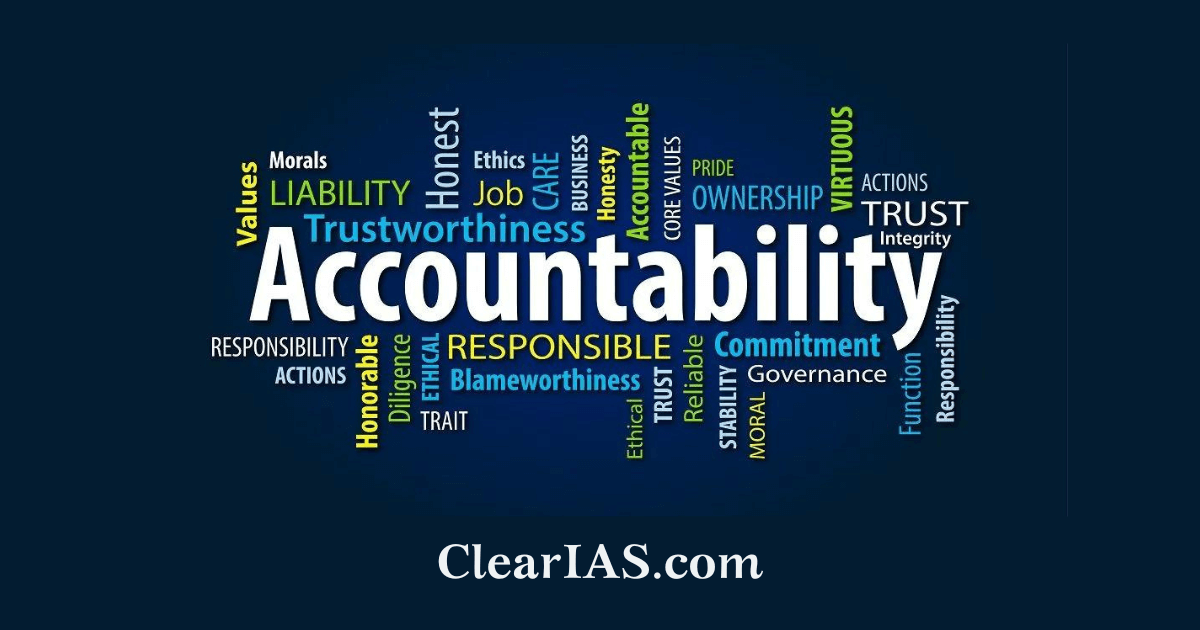 In ethics, “accountability” refers to duty, control wrongful act, responsibility, and checks and balances. Read to know more about Accountability.

A special court of the Central Bureau of Investigation has sentenced former Uttar Pradesh chief secretary Neera Yadav to four years imprisonment after finding her guilty in a 2002 land allocation case.

The charges pertain to the illegal allocation of commercial plots in Noida while Yadav, a 1971 batch IAS officer, was the chief executive of the New Okhla Industrial Development Authority.

She was sentenced to rigorous imprisonment for misusing her official powers as an IAS officer. This is a classic case of lack of accountability which is prevailing among civil servants and has dire consequences on the nation.

What is the concept of accountability? Why there is a lack of accountability in civil servants? How to uphold the civil servants accountable? What are the methods? What are the existing underlying problems and weaknesses? Are there any changes made by the government after the discrepancies found in the traditional method? What can be done to make it more transparent and accountable? These are some of the issues we will be addressing in the coming article. Let’s start.

What is meant by accountability?

Accountability is a formal concept. It is defined as the answerability to one’s actions and decisions against the laws, conventions, and even other values.

Accountability comes into the picture after the action has been performed and when the government or civil servant has taken the action. Then the decision will be scrutinized as per the legal process and procedures.

Why there is a lack of accountability among civil servants?

Since Civil servants have power, so there will always be a threat of misuse of powers. That’s why accountability is considered as one of the important values for both administration and government.

An accountable government is responsible and ethical.

It will ensure liberty, equality, freedom, respect for people, and Human Rights, and will facilitate efficiency, satisfaction, and quality of service.

Hence, accountability is an essential component and is one of the important grievances of citizens of the country.

How to uphold accountability?

Traditionally it was upheld by a formal mechanism like checks and balances along with control over the machinery through rules and procedures.

There are also other institutions ensuring accountability like CAG, CBI, CVC, National Human Rights Commission, enforcement directorate, and so on.

What are the existing problems and weaknesses?

For instance, police arresting people based on suspicion is legally justified. However, police personnel forced them to accept the commission of offense leaves the question of substantial accountability.

Another example can be the invoking of article 356 and the associated role of the governor in it. As it was seen that they were largely lacking substantial accountability.

Tax officers carrying out raids are completely legal, however, if they are targeting some sections of people question the ethical standards and the substantial aspect of accountability.

Changes made to overcome these issues

The traditional concept was showing signs of gap between the concept of accountability and its enforcement in letter and spirit.

Hence 1980s onwards there were changes made in enforcing accountability. They introduced the participation of people in the process of upholding accountability through the citizens’ charter, right to information, social auditing, and so on.

Due to the increased participation of people transparency increased which created strong deterrence against wrongdoings.

Because of this changed approach now the civil servants and the discretion of the administration are minimized and the room for misuse of power is narrowed down, resulting in improved responsiveness and responsibility of the civil servants towards the citizens of the country.

Any misuse of power if exposed should be punished and the accountability institutions like CAG, CVC, and CBI should be made independent in the true sense.

Rather than RTI being a tool for transparency, the government should try to promote transparency.

A local ombudsman should be created by combining a few districts as suggested by the second ARC.