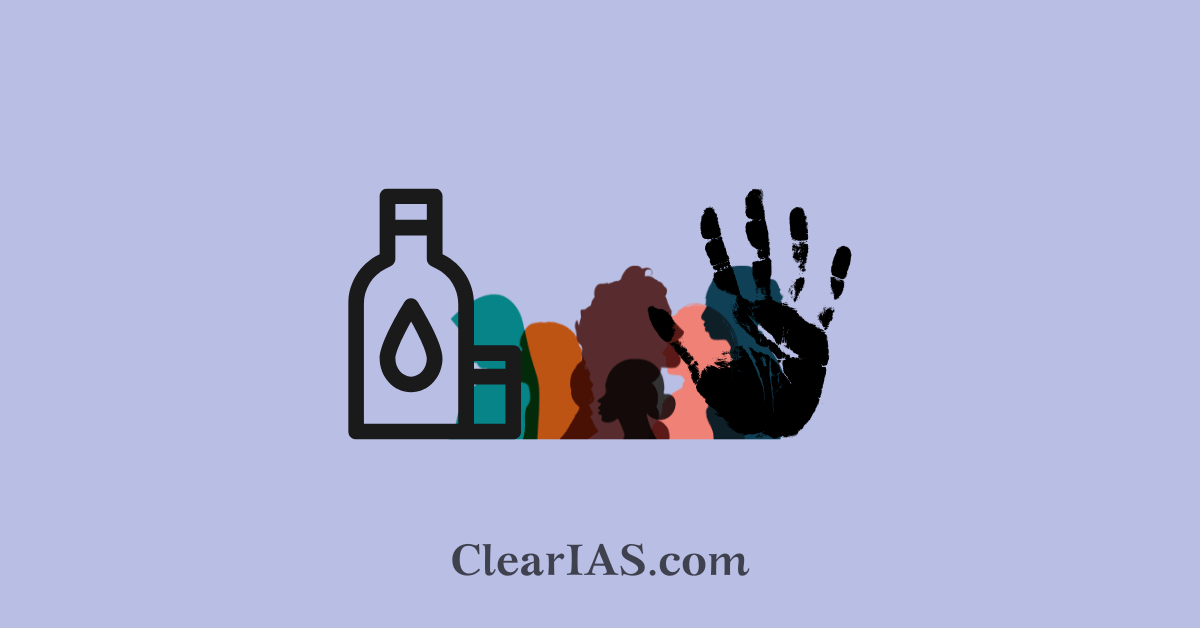 Acid attacks are heinous crimes that are unfortunately in news constantly. Today, acid attacks are reported in many parts of the world, though more commonly in developing countries. Read here to know about the crime, laws, and regulations related to acid attacks.

According to data compiled by the National Crime Records Bureau (NCRB), West Bengal and UP consistently record the highest number of such cases, generally accounting for nearly 50% of all cases in the country year on year.

In 2015, the Ministry of Home Affairs (MHA) issued an advisory to all states to ensure speedy justice in cases of acid attacks by expediting prosecution.

What is meant by the acid attack?

An acid attack is a crime of hurting a person by throwing acid on them, administering acid to that person, or doing anything with acid with the intention or knowledge that it would harm the person. An acid attack may result in injuries to a person, in any part of the body, including:

Even though the primary definition of an acid attack is given in the Indian Penal Code, 1860, the Law Commission of India has also defined an acid attack, as a form of violence against women where the perpetrator splashes a person or object with acid to deface or kill them.

An acid attack can happen anywhere. Incidents of acid attacks frequently take place at home, on the streets, and even at workplaces.

Acid attacks were not considered separate offenses until 2013.

However, as a result of IPC modifications, acid attacks are now covered by a separate section (326A) of the IPC and are therefore penalized by a minimum term of 10 years in jail that can be increased to life in addition to a fine.

The law also specifies penalties for failing to provide victims with care or for police personnel who decline to file an FIR or document any evidence. Dereliction of duty by a police officer is punishable by jail for up to two years, while denial of treatment (by both public and private institutions) is punishable by up to one year in prison.

In 2013, the Supreme Court issued a ruling regulating the sale of caustic substances after taking notice of acid attacks.

Based on the directive, the MHA created the Model Poisons Possession and Sale Rules, 2013 by The Poisons Act, 1919, and issued an order to all states on how to govern acid sales.

MHA has issued another advisory to all States/ UTs to review and ensure that the retail sale of acids and chemicals is strictly regulated in terms of the Poison Rules so that these are not used in crime.

The MHA has directed states to ensure that acid attack victims receive compensation from the respective State Government/Union Territory of at least Rs. 3 lakhs to cover the cost of aftercare and rehabilitation by Supreme Court orders.

What can be done to prevent acid attacks?

Violence against women and girls is rooted in gender-based discrimination and social norms and gender stereotypes that perpetuate such violence.

National governments should have the ultimate responsibility for introducing and implementing laws and policies around acid violence against women and girls.

The obligation for states to prevent violence against women and girls and to provide comprehensive services to survivors of such violence was established as a ‘due diligence’ standard by General Recommendation No. 19 of the UN Committee on the Elimination of Discrimination against Women (CEDAW) in 1992.

International convention on violence against women

There are several internationally agreed norms and standards that relate to ending violence against women:

Committee on the Elimination of Discrimination against Women (CEDAW)

The Convention on the Elimination of All Forms of Discrimination against Women (CEDAW), was adopted in 1979 by the UN General Assembly.

It is often described as an international bill of rights for women.

Consisting of a preamble and 30 articles, it defines what constitutes discrimination against women and sets up an agenda for national action to end such discrimination.

Although it is not mentioned explicitly in the treaty, CEDAW is applicable in times of peace and situations of armed conflicts, in line with the general understanding of the applicability of human rights instruments. It is open to all member states of the UN.

Explicitly states that it “shall apply in times of peace and situations of armed conflicts”. The Istanbul Convention is also open to non-member states.