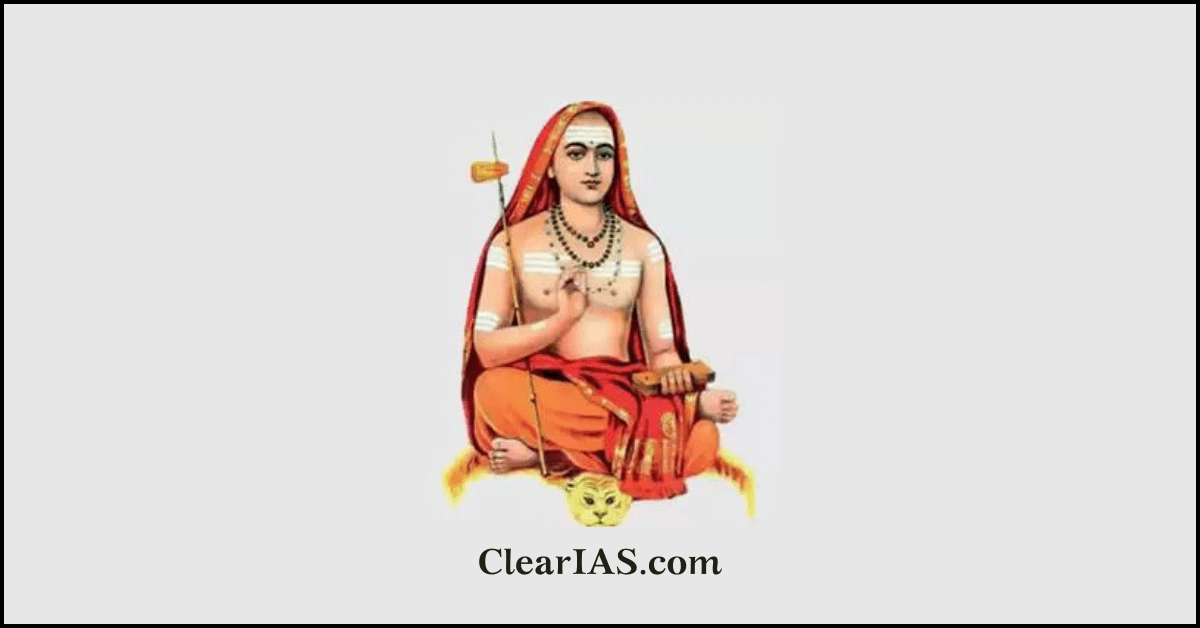 The Adi Shankaracharya story is a remarkable saga of travel and adventure, philosophical inquiry, and conflicts in faith. Know more about him.

Adi Shankaracharya is most known for his systematic reviews and commentaries on ancient Indian texts.

What are his philosophies and contributions? All of this will be discussed in this article.

Who was Adi Shankaracharya?

He was an Indian philosopher and theologian, Sankara (Jagatguru), and was a firm believer in ancient Hinduism.

Adi Shankaracharya is considered an incarnation of Lord Shiva.

He took guidance from guru GovindaBhagavatpada under whom he studied ‘GaudapadiyaKarika’, ‘Brahmasutra’, Vedas, and Upanishads.

Shankara propagated ‘Advaita Vedanta’ and ‘Dashanami Sampradaya.He came to be known as Shankaracharya among his disciples.

The significance of Adi Shankaracharya’s birthplace comes from mythology that claims Sankaracharya was captured by a crocodile, which would not release him until his mother permitted him to take Sanyas (renunciation).

This location is called Crocodile Ghat and holds religious values.

Do you know the major schools of Vedic philosophy?

Students began referring to Shankara as Shankaracharya. Despite having several pupils, four of them became the most significant Shankaracharya adherents and rose to fame. They were also in charge of the four monasteries founded by Shankaracharya. The following are Shankara’s four closest disciples:

His 4 main disciples were:

Padmapada, one of Adi Shankaracharya’s most ardent students, was born there. Sanandana, according to historical accounts, was drying his master’s garments on the Ganges River’s banks.

Sanandana began to cross the mighty Ganges while Shankaracharya begged for his clothes, holding his master’s attire close to his bosom.

He was born in Giri and was an Adi Shankaracharya follower. The other Shankaracharya pupils thought Giri was a fool since he was completely devoted to his master’s mission and showed no interest in academics.

Padmapada persuaded his teacher to begin teaching him while Shankaracharya waited for Giri because he believed it would be a waste of time. Then Shankaracharya decided to honor Giri’s devotion by giving him access to all of his knowledge.

Giri earned the moniker Totakacharya for his poetry “Totakashtakam.” The Vadakke Modam monastery, today known as the Vadakke Madom temple, was built in Thrissur by Totakacharya.

A Brahmin called Prabhakara met Shankaracharya with his little son at a village close to Kollur (Karnataka). Prabhakara, the father’s son, warned him that his father’s child is a psychopath with no redeeming qualities.

When Shankaracharya saw his child, he inquired as to what the child was doing. The small child responded by explaining Advaita philosophy in detail.

He was given the name Hasta Malaka by Shankaracharya and accepted as a student.

Sureshvara first lived the life of a typical homeowner. Misra, the foremost practitioner of Nirakara Mimamsa, was close to Shankaracharya. At some point, Mandana Misra was met by Shankaracharya and challenged to a discussion.

After months of debate, Mandana Misra finally conceded and consented to become Shankaracharya’s pupil. He built the “Naduvil Matham” at Thrissur, under the name Sureshvara.

Healing of a religion

He established 4 ashrams in four corners of India.

JyotirMatha in Badrinath, Uttarakhand – It advocates ‘Ayamatma Brahma’ (This Atman is Brahman) and was formed based on Atharva Veda. Totakacharya was the head of this matha

Govardhana Matha in Puri, Odisha -part of the famous Jagannath temple, it advocates ‘Prajnanam Brahma’ (Consciousness is Brahman). It was formed based on Rig Veda. Padmapada was made the head of this monastery.

Karnataka’s Sringeri Matha is located there. It was founded on the principles of the Yajur Veda and is situated along the Tunga River’s banks. Its motto is “AhamBrahmasmi” (I Am Brahman). This matha’s leader was appointed as Sureshvara.

The Sarada Matha in Dwarka, Gujarat, was founded on the principles of the Sama Veda and promotes the idea of “Tattvamasi” (That thou art). The leader of this matha was appointed Totakacharya.

According to Adi Shankaracharya, the nirguna brahman can be defined in any way and is identical to the most aggressive personality, God.

He became well-known as one of the best Vedic teachers in the short time of his 32-year existence.

Only by using spirituality and a thorough comprehension of the universe was he able to accomplish this achievement. Shankara, Lord Shiva’s manifestation, is highly regarded.

More than any other spiritual leader, Adi Shankaracharya is considered a philosopher and preacher who had a significant impact on Hinduism.

In the course of his  life, he is credited for bringing together the various Hindu religious factions, founding organizations in all four corners of the nation, penning all significant religious treatises, and establishing Sanatan Dharma practices through discourse.