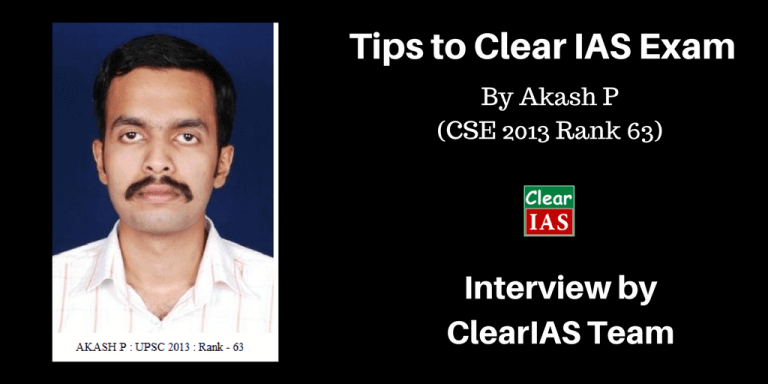 Akash P is just 22. When most candidates took years of preparation before first attempting IAS exam, Akash did it soon after his B.Tech final year. He not only cleared Prelims, Mains and Interview at first stretch but also landed at All India Rank 63 in UPSC Civil Services Examination 2013, without leaving any doubts about his selection into the prestigious Indian Administrative Service (IAS). To add, he is also one among the toppers of Indian Forestry Services Exam (IFoS), with All India Rank 27. Let’s know from Akash, how he cleared IAS in the first attempt and explore his preparation strategies and approach. Let’s welcome Akash to the “UPSC Toppers Interview” at www.clearias.com.

Thank you very much! No, it wasn’t my childhood dream, which was to become a scientist. For that, I determined to get into IIT first which I managed to do but halfway down the line I realized that S&T was not my “cup of tea”. So I was in a confused state but career guidance seminar conducted at college made the picture clear as to what I should pursue after college.

ClearIAS.com: How did you feel when you heard the news that your name is on the final rank list? Can you share the moments of happiness with our readers?

I was indeed happy and fortunate to be in the rank list and that too within the 100. But as human nature – which is inherently greedy and ungrateful – would have it, I soon found myself complaining that I wouldn’t get the Kerala cadre.

But in retrospect, I find that I am indeed very lucky that I have gone this far and I will happily accept whichever cadre posting that I will be rewarded with.

Can you share a little bit about your background? (Family, School, College, Work etc.)

We are a middle-class family with moderate means to lead a respectful life. In no way, we could be construed as rich, except that we do own some ancestral immovable assets of some value. I did my schooling at Sarvodaya Vidyalaya, Trivandrum and largely through self-study without any specialized coaching, I managed to reach IIT. I refused a campus job and soon after graduating I set on to attempt the civil services and hence I have no work experience.

ClearIAS.com: IIT and now IAS!!! Can you brief us your thoughts, views, and ambitions when you climbed each position in the ladder of your life?

I belong to a ‘middle class’ family with an intrinsic attraction towards govt. jobs. I am ambitious and have had a reasonably successful academic career before joining college.  I wanted to be a scientist and for that, I cracked IIT without any specialized coaching after which I was very elated.  Halfway down the line, I realized that S&T was not my cup of tea. There I constantly suffered setbacks, crisis, and confusion. But a special seminar conducted at college by the alumni association which was presided by 3 IAS officers who themselves are IITians gave a fresh direction to the random wanderings of the mind and provided a goal for me to be fixated on.

Now that I have attained another level of temporary happiness, I hope that it sustains itself and I am able to lead a satisfied and fulfilled life.

ClearIAS.com: Do you feel that the competition level of UPSC Civil Services Exam is on a rise? It seems that there is an increasing trend of candidates from IITs, IIMs and AIIMS attempting and clearing this exam. Is Civil Service the final destination /ambition of Indian youth, in this age of lucrative private sector jobs?

Yes, obviously there is. Probably the global financial crisis 2008 which resulted in a lot of retrenchment has reduced the glamour of private jobs and those guys may be making a beeline to govt service. Also, the power, privilege, perks etc attached to govt job is attracting more youngsters these days.

There is ‘something’ in public service that is not obtained even in lucrative govt jobs.

ClearIAS.com: How did you approach this exam? What was your strategy in general?

I did not consider this as a war and so there was no long-term strategy or war-plan! I did things that I thought were necessary and always introspected to see where I was weak at and what needed attention and took corrective actions. So, I believe that knowing oneself as to where he stands on everything is important in civil services.

For eg, when at the beginning I realized that my grasp of the English language was not up to the mark, I started reading 2 newspapers along with magazines and even took a minor (consisting of 3 papers) in English Literature from my college to augment my resources!

ClearIAS.com: How long (Years/Months) have you been preparing, before you gave this attempt? Also, on an average how many hours did you put on a daily basis? How did you manage time?

With a civils idea in mind, I had started reading the newspaper at the end of my 2nd year at college. But since UPSC kept the aspirants in suspended anxiety about an impending pattern revamp, I wasn’t able to start preparing for the Optionals, which would have been Mathematics and Physics. Even full-fledged and pointed preparation of GS was possible only after the notification came out as late as in March 2013.

Probably around 6-8 hours a day. It wasn’t too hectic; I took outings, walks, called on relatives to keep myself in a cheery mood. But this is undoubtedly a very stressful and non-amusing endeavor.

I studied alone as I never did a group study. I need quietness and solitude to grasp things better.

ClearIAS.com: What were the Newspapers and Magazines you followed?

I relied on THE HINDU extensively. Besides, I also read FRONTLINE magazine and EPW journal.

For Prelims, I joined TIME mock test series for Paper-II. Nothing for Paper-I.

For Mains, I joined Kerala State Civil Services Academy in August 2013 after prelims result was out. Attended GS class for 1 months and stopped as I was not satisfied. But attended Mathematics Optional class till the exam as that was pretty good.

For the interview, Academy’s mock sessions were very useful.

ClearIAS.com: What websites will you recommend for future aspirants for UPSC preparation, including the government websites?

ClearIAS.com: Did you use Social Media like Facebook, Twitter or other forums for UPSC Preparation? Or did you say good-bye to the social media during preparation days? Any tips?

ClearIAS.com: What was your preference: Reading online (Laptop/Tablet/Mobile) or reading the traditional way (Books)? Or a mix of both?

I prefer hard and tangible material whether books or newspaper. But to refer to online content I did use my desktop computer.

ClearIAS.com: Daily timetable (When will you wake up, study sleep etc. etc.)

No nothing. I followed my instinct as to what should be done. But as mentioned earlier, I did introspect and evaluated my areas of weakness and did remedial action whenever necessary.

How did you keep yourself motivated for this one-year long exam? I undertake frequent outings, walk, visit friends etc to relax. Also, I would keep remembering my goal so that I didn’t deviate from my path.