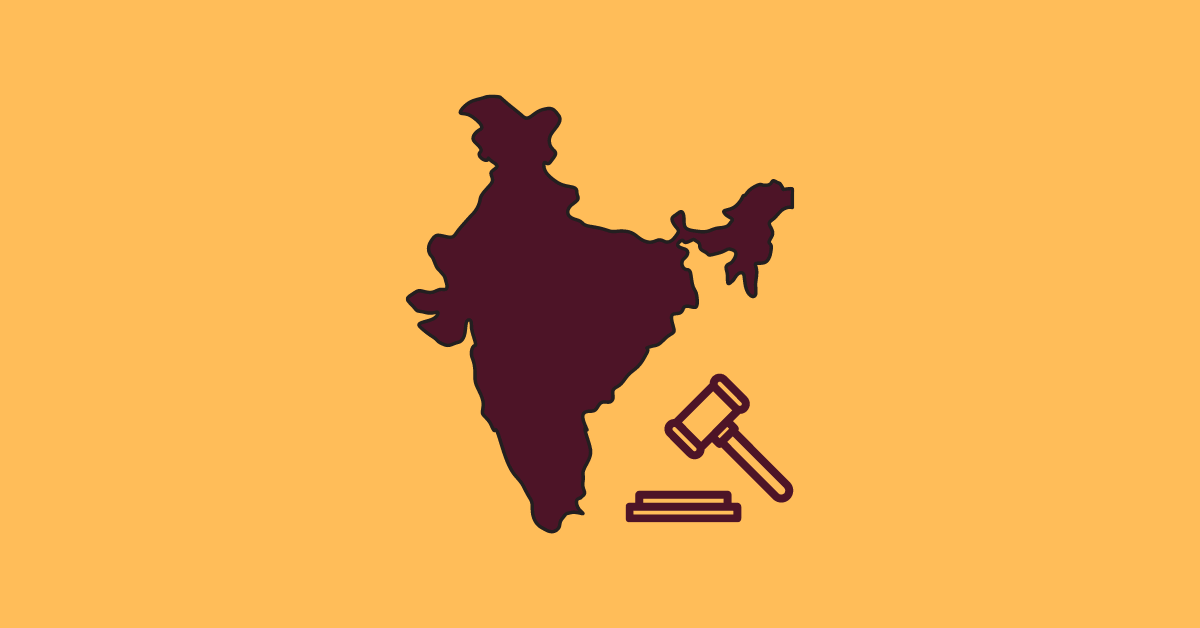 The basic structure doctrine is one of the fundamental judicial principles connected with the Indian Constitution.

What is the Basic Structure Doctrine?

Indian Constitution is a dynamic document that can be amended according to the needs of society whenever required. Constitution under Article 368 grants power to the Parliament to amend whenever there is a necessity. The Article also lays down the procedure for amendment in detail.

The doctrine of basic structure is nothing but a judicial innovation to ensure that the power of amendment is not misused by Parliament. The idea is that the basic features of the Constitution of India should not be altered to an extent that the identity of the Constitution is lost in the process.

Indian Constitution upholds certain principles which are the governing rules for the Parliament, any amendment cannot change these principles and this is what the doctrine of basic structure upholds. The doctrine as we have today was not present always but over the years it has been propounded and upheld by the judicial officers of this country.

In this article, we would dwell in detail on the evolution of the doctrine of basic structure and what are the features of the Constitution of India that have been regarded as part of the basic structure by the hon’ble courts.

Timeline for Evolution of Basic Structure 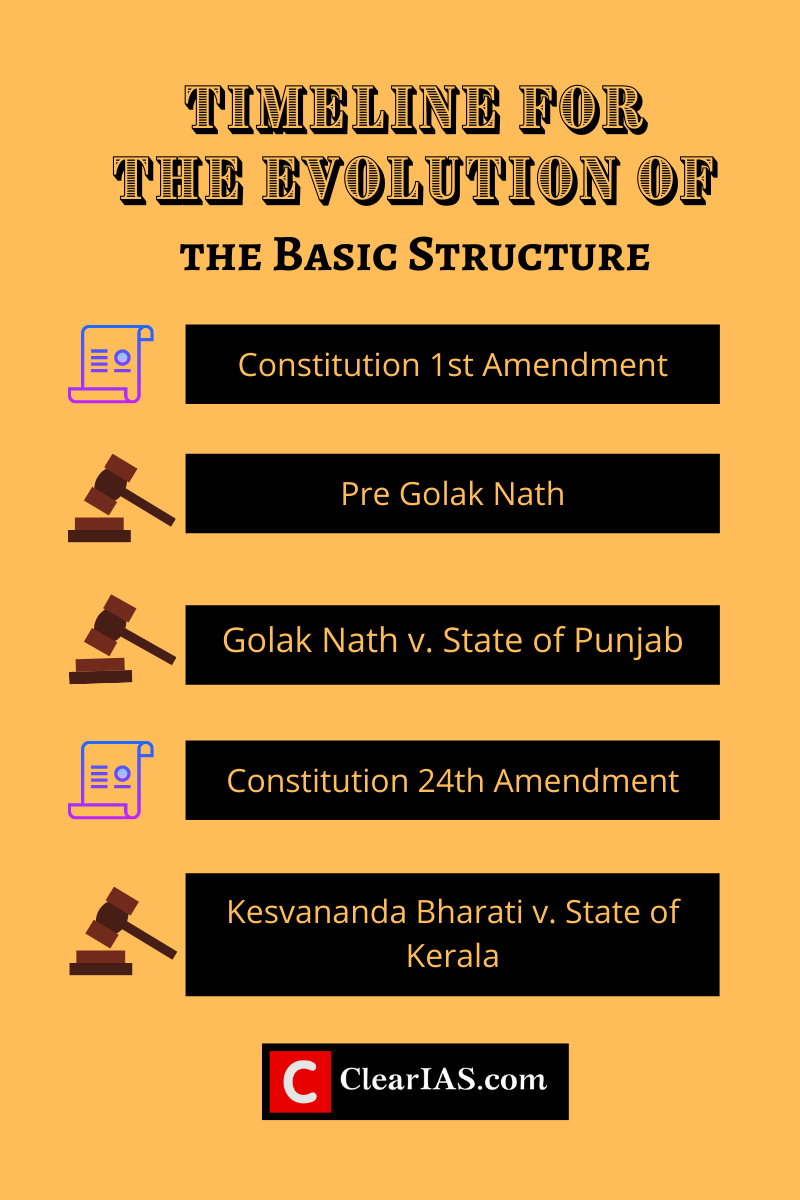 The Constitution of India was amended as early as 1951, which introduced the much-debated Article(s) 31A and 31B to it. Article 31B created the 9th Schedule which stated that any law provided under it could not be challenged for the violation of Fundamental Rights as per Article 13(2) of the Constitution. Article 13(2) states that the Parliament shall not draft any law which abridges the rights conferred under Part III and to that extent it shall be void.

A petition was filed in the Supreme Court of India challenging Article(s) 31A and 31B on the ground that they abridge or take away rights guaranteed under Part III of the Constitution which is against the spirit of Article 13(2) and hence should be declared void. In this case, Shankari Prasad Singh Deo v. Union of India, the Hon’ble Supreme Court held that the power to amend the Constitution including the Fundamental Rights is conferred under Article 368, and the word ‘Law’ as mentioned under Article 13(2) does not include an amendment of the Constitution. There is a distinction between Parliament’s law-making power, that is, the legislative power and Parliament’s power to amend or constituent powers.

After this, several amendments were brought to the Constitution and once again the scope of amendments was challenged in the Sajjan Singh v. State of Rajasthan. The five-judge bench in Sajjan Singh dealt with the validity of the 17th Constitutional Amendment which had added around 44 statutes to the 9th Schedule. Though all of the judges agreed with the decision of Shankari Prasad but for the first time in the concurring opinion by Hidyatullah and Mudholkar JJ doubts were raised on the unfettered power of Parliament to amend the Constitution and curtail the fundamental rights of the citizens.

In this case, three writ petitions were clubbed together. The first one was by children of Golak Nath, against the inclusion of the Punjab Security of Land Tenures Act, 1953 in the Ninth Schedule. The other two petitions had challenged the inclusion of the Mysore Land Reforms Act in the Ninth Schedule. It is an 11 judge bench decision, wherein the Hon’ble Supreme Court by a majority of 6:5 held that the fundamental rights were outside the purview of the amendment of the Constitution, based on the following reasoning:

However, the 1st, 4th, and 17th Amendments were not declared invalid by the Court as the ruling was given a prospective effect. This meant that no further amendments could be brought into the Constitution violating the fundamental rights. But the cases of Shankari Prasad and Sajjan Singh were declared bad in law by the Court to the extent that Article 13(2) does not include a Constitutional amendment under Article 368.

The historic judgment was delivered by a 13 judge bench and with the majority of 7:6; they overruled the Golak Nath case. It was held that the power of Parliament to amend the Constitution is far and wide and extends to all the Articles but it is not unlimited to an extent that it destroys certain basic features or framework of the Constitution.

The Hon’ble Supreme Court, however, held that the 24th Amendment was valid as it only states what was present before implicitly. It does not enlarge the powers of Parliament; Article 368 always included the power and procedure to amend the Constitution.

Shelat and Grover, JJ., added the following to the above list:

Hegde and Mukherjee, JJ., had their list of the elements of the basic structure, which included:

Whereas Jaganmohan Redd, J., believed that it was the Preamble that laid down the basic features of the Constitution, which are:

After this judgment, the general opinion was that the judiciary is trying to create an overhaul over the Parliament, but soon an opportunity was laid down before the Court to examine the doctrine.

Indra Nehru Gandhi v. Raj Narain was the case in which the faith in the doctrine was affirmed and established. In this case, the appellant had filed an appeal against the decision of Allahabad High Court invalidating her election as the Prime Minister. While the appeal was still pending at the Supreme Court, the 39th Amendment was enacted and enforced which stated that no court has jurisdiction over the election disputes of the Prime Minister.

The Hon’ble Supreme Court relying on the decision of Kesavananda Bharati stated that democracy was an essential feature of the Constitution and forms part of the basic structure. The bench added certain other features to the list of the basic structure, which was: Rule of Law and the power of Judicial Review.

The basic structure then came up in the case of Minerva Mills Ltd. v. Union of India, wherein the Supreme Court provided clarity to the doctrine and laid down that the power of amendment under Article 368 is limited and exercise of such power cannot be absolute. A limited amending power was very well part of the basic structure doctrine of the Constitution. Further, the harmony and balance between fundamental rights and directive principles are also part of the basic structure, and anything that destroys the balance is an ipso facto violation of the doctrine.

The case of L. Chandra Kumar v. Union of India again stated that the power of judicial review under Article 32 of the Supreme Court and Article 226 of the High Court is part of the basic structure doctrine and these powers cannot be diluted by transferring them to administrative tribunals.

Today there is no dispute regarding the existence of the doctrine, the only problem that arises time and again is the contents of the same.

Certain contents have been reaffirmed again and again by the Courts whereas some of them are still in the process of deliberations.

The basic structure doctrine grants the fine balance between flexibility and rigidity that should be present in the amending powers of any Constitution.

Kirtika Goyal is a graduate from National Law University Odisha. She works closely with ClearIAS Team and actively contributes well-researched articles connected with Indian Polity. She has a special interest in Constitutional Law.