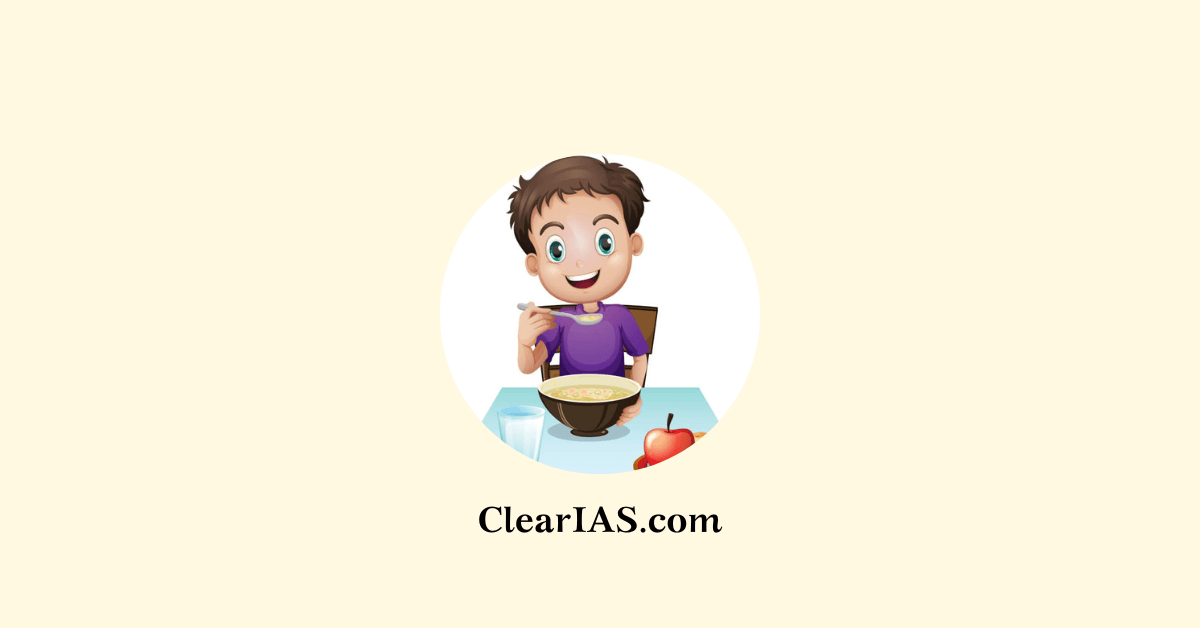 Recently the Chief Minister’s Breakfast Scheme was introduced in Tamil Nadu for children in grades I through V enrolled in public schools. Is the scheme the same as the Mid-day meal scheme? What are its provinces? What is its importance? Scroll down the page to more about the novel idea.

Specifications of the Scheme

From Monday through Friday, the breakfast scheme would be offered at a cost of Rs 33.56 crore to more than 1,500 government-run schools around the state.

In government schools, 1.14 lakh pupils in grades 1 through 5 are expected to benefit at an estimated cost of Rs 12.75 per pupil.

The government has set a goal of giving pupils 293 calories and 9.85 grammes of protein on average per day. Upma, kichadi, pongal, and on Fridays, rava kesari or semiya kesari, will all be offered in various variations to the students.

This programme advances the nationwide midday meal programme that the state pioneered in 1983.

Importance of the breakfast scheme

Offering breakfast and lunch will give a child almost 28 g of protein and 846 calories per day. This will ensure that there is no hunger in the classroom, improving learning outcomes.

India has the highest child-wasting rate of any nation included in the Global Hunger Index, at 17.3%.

The promise of food in schools encourages parents to bring their kids to school, especially those from low socioeconomic backgrounds.

According to a government poll, more than 25% of students don’t have breakfast before going to school. Making sure that breakfast is served regularly in schools benefits pupils by improving their concentration, learning, and memory.

Overcome the effects of Covid

Children’s learning and nutritional outcomes have significantly decreased since the epidemic years. Innovative measures, such as breakfast programmes, are crucial to overcoming obstacles.

States are responsible for promoting welfare and minimising income, facility, and opportunity disparities among people and groups (Article 38).

School meals encourage students to stay in school, which lowers the demand for child labour.

Eroding caste stereotypes and class disparities through the shared experience of a meal.

Critics claim that the programme may run into problems like those with the Midday Meal Program.

These may consist of:

It has been stated that this happens frequently. Examples include serving simple chapatis with salt and cases of food poisoning.

Misappropriation of monies and theft of goods provided under the scheme remain problems. For instance, schools in Odisha recently reported a shortage of 4-5 kg of grains in each gunny sack with a 50 kg capacity.

Because of stringent religious and caste beliefs, dietary choices in such programmes can draw criticism. For instance, several states have been hesitant to include eggs on the menu for school lunches. Children have also occasionally been forced to sit in different classrooms based on their caste status.

Teachers have been feeding the kids out of their own pockets or on credit because of the delays in payment. The cooks and helpers are not categorised as workers but rather as honorary workers. Because of this, the minimum wage laws do not apply to them. Most mid-day meal chefs earned less than Rs 2000 per month as a result.

The Department of Agriculture of the United States of America has launched breakfast programmes in schools in numerous states. Such programmes were implemented in several European nations, notably France three years ago.

According to research conducted in this country, free breakfast programmes could improve academic results by likely increasing student attendance and sharpening their focus.

It is important to consider T.N.’s performance because the breakfast scheme is being offered as a first-of-its-kind programme. However, the government, which has decades of expertise managing the mid-day meal programme, must avoid the mistakes that have previously presented obstacles in its way.