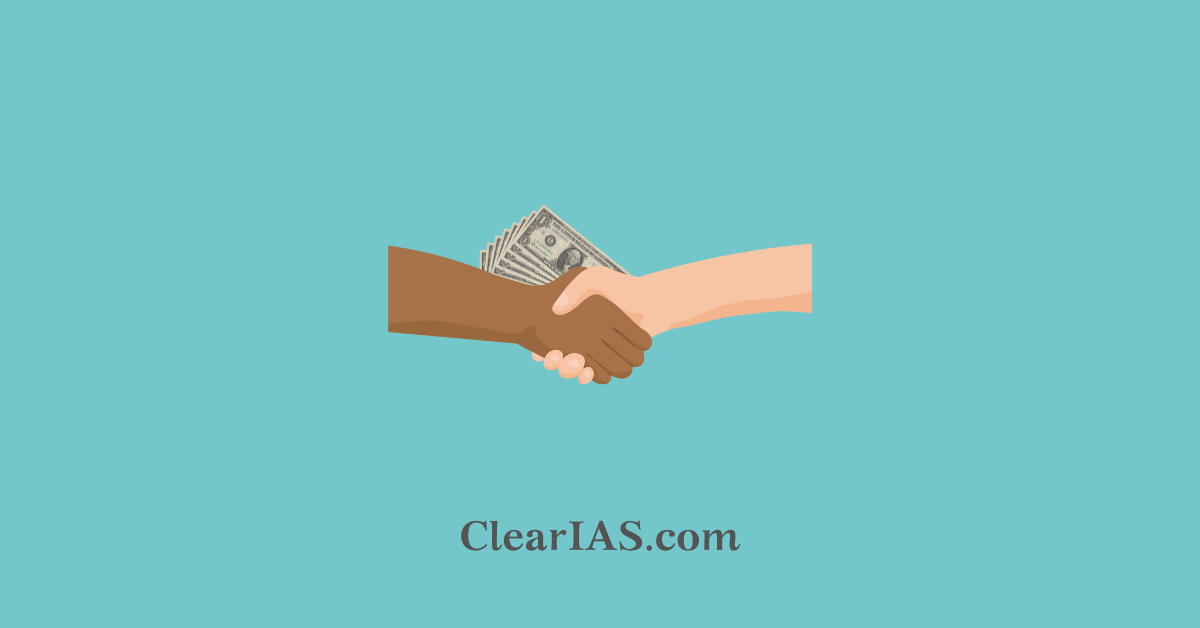 What do you mean by corruption? What are its associated challenges? Read further to know more.

Corruption is defined as the abuse of entrusted power for private gain. There are several challenges and impacts associated with corruption.

India ranked 85th out of 180 countries (score 40) in Corruption Perceptions Index (CPI) 2021, released by Transparency International, which measures the corruption level of a country’s public sector.

Why Corruption is Unhealthy?

Corruption has a wide-ranging impact on organizations, individuals, and communities as well.

The achievement of the Sustainable Development Goals of the United Nations is hampered by corruption. The SDGs are comprehensive, therefore it is not surprising that corruption might undermine them.

Countries that lack the capacity to govern effectively are unable to end poverty, eradicate hunger, provide their population with high-quality healthcare and education, ensure gender equality and other human rights, lower inequality, and other goals.

To be more precise,  Goal 16 of the SDGs which is “Promote peaceful and inclusive societies for sustainable development, provide access to justice for all, and build effective, accountable, and inclusive institutions at all levels,”, which is highly relevant, is difficult to achieve if corruption in public services persists.

In addition, resolutions passed by the Conference of the States Parties to UNCAC have consistently stressed the connection between corruption and sustainable development. Therefore, if the global community is serious about achieving the SDGs, it must recognize corruption as a barrier to their achievement and strengthen its anti-corruption measures.

Although it is challenging to find precise figures for the economic consequences of corruption, International Monetary Fund (IMF) research from 2016 indicated that the cost of bribery alone varies from $1.5 to $2 trillion annually.

This amounts to an overall economic loss of about 2% of the world’s GDP.

However, it does not account for the financial costs associated with all other types of corruption. In developing nations, corruption may contribute to underdevelopment.

According to a report published by Transparency International, “The Impact of Corruption on Growth and Inequality”, At the macro level, research generally shows that corruption has a detrimental, direct effect on economic development and growth.

Additionally, corruption has an indirect impact on a country’s economic performance by influencing a number of variables that spur economic growth, including investment, taxation, public spending level, composition, and effectiveness.

The World Bank  (2019) estimates that more than 50% of people in the oil-rich country live in extreme poverty. This illustration demonstrates how wealth redistribution occurs when corrupt players use the political and economic systems to their advantage.

Corruption makes it possible for party officials, bureaucrats, and contractors to use funds allocated for elections, health care, education, and poverty assistance as a means of personal gain. As a result, social programs, and political systems’ potential for redistribution degrade.

The Office of the High Commissioner for Human Rights (OHCHR) of the United Nations has recently attracted attention to important connections between corruption and human rights violations.

Corruption itself reduces the capacity of the State to address violations of civil and political rights and to enact the necessary safeguards, including socioeconomic rights, which frequently call for complex government initiatives.

Dysfunctioning of Public and Private Sector

Dysfunction is the result of several corrupt actions added together. The quality of products and services declines, whether they are provided by the public or private sectors, and accessing them becomes more expensive, time-consuming, and unfair.

Instead of promoting innovation and efficiency, state-owned organizations and sectors are designed to benefit government officials. In organizations, this may result in the loss of intrinsic motivation.  People start to question the worth of effort and innovation.

People can no longer trust judges and prosecutors to do their jobs when corruption penetrates the legal system.

Citizens may be falsely accused of crimes, denied due process, and wrongfully imprisoned, especially those who lack finances or strong allies.

Because money can be laundered, funding can be hidden, and judges and politicians can be bribed, nefarious parts of society can flourish. As levels of intimidation rise, so do levels of violence, illicit drug use, prostitution, and sexual slavery.

In addition to being the result of corruption, organized crime can also be brought about by corrupt opportunities created by a weak, ignorant, or inefficient government.

It is a well-known fact that the Mafia uses the construction sector as a means of money laundering and a major source of earnings.

Buildings that are fundamentally hazardous are present everywhere throughout the country as a result of obvious violations of land-use and permission restrictions, purportedly accomplished by bribery, favoritism, and influence-peddling.

Damage to Climate and Biodiversity

Funding and measures to combat climate change are hampered by corruption, which is a challenge that undermines programs to conserve forests and manage them sustainably. It also encourages wildlife-related crimes.

The government of India is committed to “Zero Tolerance Against Corruption” and has taken several measures to combat the challenges associated with corruption which include: