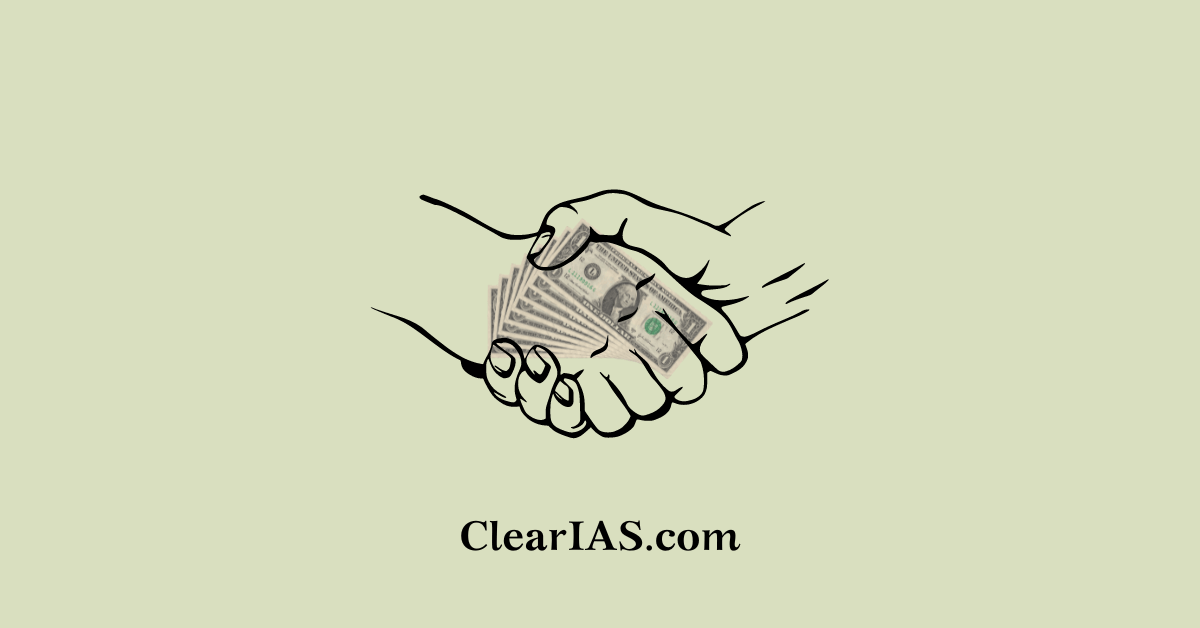 Corruption can be simplified as the abuse of power by those in positions. Lack of transparency and accountability leads to the prevalence of corruption in civil services.

What do you understand by corruption?

Corruption is a practice performed by an individual or organization. Corrupt practices include bribery, patronage, nepotism, embezzlement, influence peddling, use of one‘s public position for self-enrichment, partiality, absenteeism, abuse of public property, leaking and/or abuse of information, and the like.

In Corruption Perception Index, India was ranked 85 among 180 countries.

Types of Corruption in Civil Services

The typical manifestations of corruption in the civil service in developing countries like ours include:

Bribery is the act of promising, offering, or providing a benefit in such a way as to improperly influence a public servant’s actions or decisions. Bribery is frequently seen as the most prevalent kind of corruption.

Bribes can influence the allocation of monetary benefits such as credit subsidies and favored prices, and exchange and can speed up the granting of permission, licenses, and permits to carry out activities that are perfectly legal. This is the so-called―grease money.

Extortion entails pressuring a person or group to give something to a public servant (or employees) in exchange for acting (or not acting) in a specific way. The only difference between it and bribery is the use of violence or the threat of violence to extract money.

When public employees who have been given the authority and responsibility over public resources steal those resources, whether they are financial or not, it is called embezzlement.

Fraud is a public servant’s actions or behaviors that mislead other people or organizations (such as the government, NGOs, or private enterprises) into giving the public servant a benefit that they would not otherwise receive.

Fraud is regarded as an economic crime that involves some form of deception for the benefit of oneself or another group.

Therefore, using discretion improperly for personal gain without outside coercion or extortion implies abuse of power.

Cases involving conflicts of interest include circumstances in which a public servant acts or fails to act on an issue in which the public servant’s personal interest or the interest of people or entities connected to the concerned official is directly or indirectly affected.

Abuse of privilege or insider trading refers to the use of confidential information or knowledge that a public official has access to as a result of holding a public office in order to further their own interests or the interests of entities or people close to them.

Favoritism is the practice of granting preferential treatment or favors by a person in a position of trust based on preconceived notions such as friendship, racial or ethnic prejudice, or even family relations.

When the natural course of justice or fairness is obstructed for the benefit of a select group of affluent, influential, and well-connected people and groups at the detriment of the general public, this is known as obstruction of justice. A good example of this would be the selective application of regulations.

Influence peddling often referred to as trading in influence, is the practice of using one’s power to improperly influence a person, organization, or government in exchange for money, loyalty, or any other tangible or intangible unfair advantage.

Causes of Corruption in the Civil Services

Government officials’ lack of responsibility, unethical behavior, and corrupt practices are all included in the term “corruption in the civil service.”

Developing nations like India are more likely to experience the effects of corruption for a number of reasons, including:

Reason for the Prevalence of Corruption in the Civil Services

Although the drivers of corruption are numerous, the most common reason for the prevalence of corruption in civil service include:

Corruption is principally a governance issue – a failure of institutions and a lack of capacity to manage society by means of a framework of social, judicial, political, and economic checks and balances. Implementing and enforcing laws and regulations that guarantee accountability and transparency becomes more challenging when these formal and informal systems fail.

Restructuring Bureaucracies: The moment has come to change the way that bureaucracies operate. In relation to bureaucratic structure, there are seven sets of anti-corruption policies:

Enumerate Ethical and Public-Spirited Civil Servant: When listing the characteristics of an ethical and public-spirited civil servant, an ideal official should ensure that there are no open cases within his jurisdiction, exhibit the greatest levels of probity and integrity while in office, be proactive in communicating government policies to the public, and, most importantly, have compassion for the suffering of marginalized groups.

Reflecting on the importance of ‘good institutions’ for ‘good governance’: There is a need to re-engineer our institutions and streamline the processes to cut down delays and ensure timely delivery of the services.