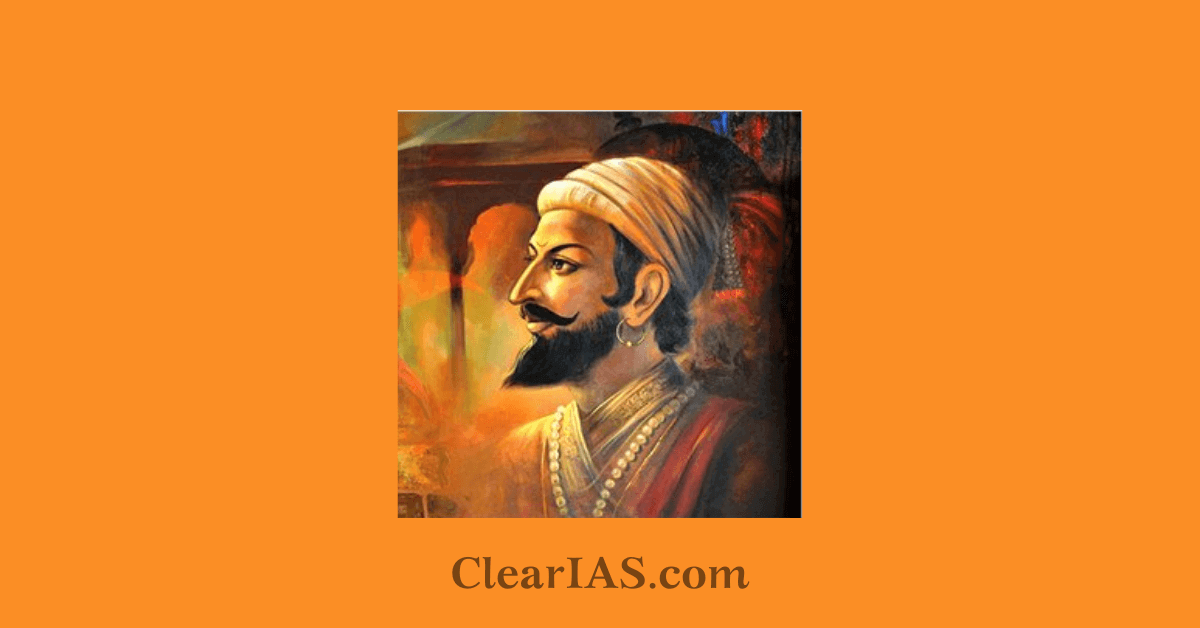 Chatrapati Shivaji Maharaj was the founder of the Maratha Empire in western India. He is considered to be one of the greatest warriors of his time.

With his determination and great administrative skills, Shivaji carved out an empire out of the declining Adilshahi sultanate of Bijapur which eventually became the great Maratha Empire.

Shivaji implemented an efficient and progressive administration with the help of a disciplined military and well-established administrative setup.

Shivaji was well-known for his innovative military tactics based on non-conventional methods which took advantage of the like geography and speed.

The early life of Shivaji

Shivaji was born on 19th February 1630 at Shivneri Fort in District Pune in the present-day state of Maharashtra.

He was the son of Shahaji Bhonsle, a Maratha general who held the jagirs of Pune and Supe under the Bijapur Sultanate and Jijabai, a pious woman whose religious qualities had a profound influence on him.

Since Shahaji spent most of his time outside of Pune, the responsibility of overseeing Shivaji’s education rested on the shoulders of a small council of ministers which included a Peshwa (Shamrao Nilkanth), a Mazumdar (Balkrishna Pant), a Sabnis (Raghunath Ballal), a Dabir (Sonopant) and a chief teacher (Dadoji Konddeo). Kanhoji Jedhe and Baji Pasalkar were appointed to train Shivaji in the military and martial arts.

Shivaji was married to Saibai Nimbalkar in 1640.

In 1645 he successfully got control of several strategic forts under the Bijapur Sultanate around Pune – Torna from Inayat Khan, Chakan from Firangoji Narsala, Kondana from Adil Shahi Governor, along with Singhagarh and Purandar.

Shivaji had emerged as a threat for Mohammed Adil Shah who gave the order to imprison Shahaji in 1648. Shahaji was released on the condition that Shivaji kept a low profile and kept from further conquests.

But Shivaji resumed his conquests after Shahaji’s death in 1665 by acquiring the valley of Javali from Chandrarao More, a Bijapur jagirdaar.

Battle of Pratapgad, 1659 was fought at the fort of Pratapgad near the town of Satara, Maharashtra, between the forces of Shivaji Maharaj and the Adilshahi general Afzal Khan.

The battle of Pavan was fought at a mountain pass in the vicinity of the fort.

The sacking of Surat, 1664 occurred near the city of Surat, Gujarat, between Shivaji Maharaj and Inayat Khan, a Mughal captain.

Battle of Purandar, 1665 was a major battle fought between the Mughal Empire and Maratha Empire.

Battle of Sinhagad, 1670 occurred on the fort of Sinhagad near the city of Pune, Maharashtra between Tanaji Malusare, a commander of Maratha ruler Shivaji Maharaj and Udaybhan Rathod, fort keeper under Jai Singh I who was a Mughal Army Chief.

Battle of Kalyan, 1682-83 was significant as Bahadur Khan of the Mughal Empire defeated the Maratha army and took over Kalyan.

Battle of Sangamner, 1679 was again fought between the Mughal Empire and Maratha Empire. This was the last battle fought by Shivaji.

Marathas in conflict with Mughals

1657: Shivaji raided Mughal territory near Ahmednagar and in Junnar to which Aurangzeb responded to the raids by sending Nasiri Khan, who defeated the forces of Shivaji at Ahmednagar.

1664: Shivaji took over the wealthy Mughal trading port of Surat.

1665: The Treaty of Purandar was signed between Shivaji and Raja Jai Singh I who was representing Aurangzeb after Marathas were defeated in the Battle of Purandar.

1666: When Shivaji went to meet the Mughal emperor at Agra, he was arrested and kept prisoner. He and his son escaped in disguise from there.

After that, there was peace between the Marathas and the Mughals until 1670.

After 1670 Shivaji launched an all-out offensive against the Mughals. He recovered most of his territories sieged by the Mughals within four months. Through his military tactics, Shivaji acquired a large part of the land in the Deccan and western India.

Shivaji’s relations with the British

1660: Initially he was on cordial terms with the British, but when the British supported the Bijapur sultanate against him, things became different.

1670: Shivaji acted against the English in Bombay by them not selling them war material. This conflict continued and numerous negotiations between the two parties to come to terms failed.

He was crowned the King of Marathas on June 6, 1674, at Raigadh in an elaborate coronation ceremony, establishing the Hindu kingdom among the Muslim-dominated south.

He took upon several titles like Chhatrapati (paramount sovereign), Shakakarta (founder of an era), Kshatriya Kulavantas (head of Kshatriyas), and Haindava Dharmodhhaarak (one who uplifts the sanctity of Hinduism).

Post-coronation, the Marathas launched aggressive conquest efforts to consolidate most of the Deccan states under their sovereignty.

They conquered Khandesh, Bijapur, Karwar, Kolhapur, Janjira, Ramnagar, and Belgaum and captured forts at Vellore and Gingee, controlled by the Adil Shahi rulers.

Shivaji also came to an understanding with his step-brother Venkoji over his holdings over Tanjavur and Mysore.

He aimed at was to unify the Deccan states under the rule of a native Hindu ruler and protect it from outsiders like the Muslims and Mughals.

He divided his kingdom into four provinces, each headed by a Mamlatdar. The village was the smallest unit of administration and the head was titled Deshpande, who headed the Village Panchayat.

Shivaji also promoted the use of Marathi and Sanskrit in his court instead of Persian.

He was tolerant of all religions and was strictly against caste discrimination.

Shivaji eliminated the Jagirdari System and replaced it with Ryotwari System, removing the need for middlemen between farmers and the state.

Shivaji strictly supervised the Mirasdars who had hereditary rights inland.

The revenue system was based on the Kathi system of Malik Amber in which every piece of land was measured by Rod or Kathi.

Shivaji maintained a strong military force, built several strategic forts to secure his borders, and developed a strong naval presence along the Konkan and Goan coasts.

The ordinary soldiers were paid in cash, but the chief and military commander were paid through jagir grants (Saranjam or Mokasa).

Death of Shivaji and his legacy

Shivaji died at the age of 52 on April 3, 1680, at the Raigad Fort, after suffering from a bout of dysentery.

Shivaji Maharaj (1627-1680) carved out a stable kingdom with the support of powerful warrior families (Deshmukh). Groups of highly mobile, peasant- pastoralists (Kunbis) provided the backbone of the Maratha army.

Poona became the capital of the Maratha kingdom.

After Shivaji, Peshwas developed a very successful military organization by raiding cities and by engaging Mughal armies in areas where their supply lines and reinforcements could be easily disturbed.

By the 1730s, the Maratha king was recognized as the overlord of the entire Deccan peninsula. He possessed the right to levy Chauth and sardeshmukhi in the entire region.

The frontiers of Maratha domination expanded, after raiding Delhi in 1737, but these areas were not formally included in the Maratha empire but were made to pay tribute as a way of accepting Maratha sovereignty.

These military campaigns made other rulers hostile towards the Marathas. As a result, they were not inclined to support the Marathas during the third battle of Panipat in 1761.

By all accounts, cities (Malwa, Ujjain, etc) were large and prosperous and functioned as important ant commercial and cultural centers show the effective administration capacities of Marathas.