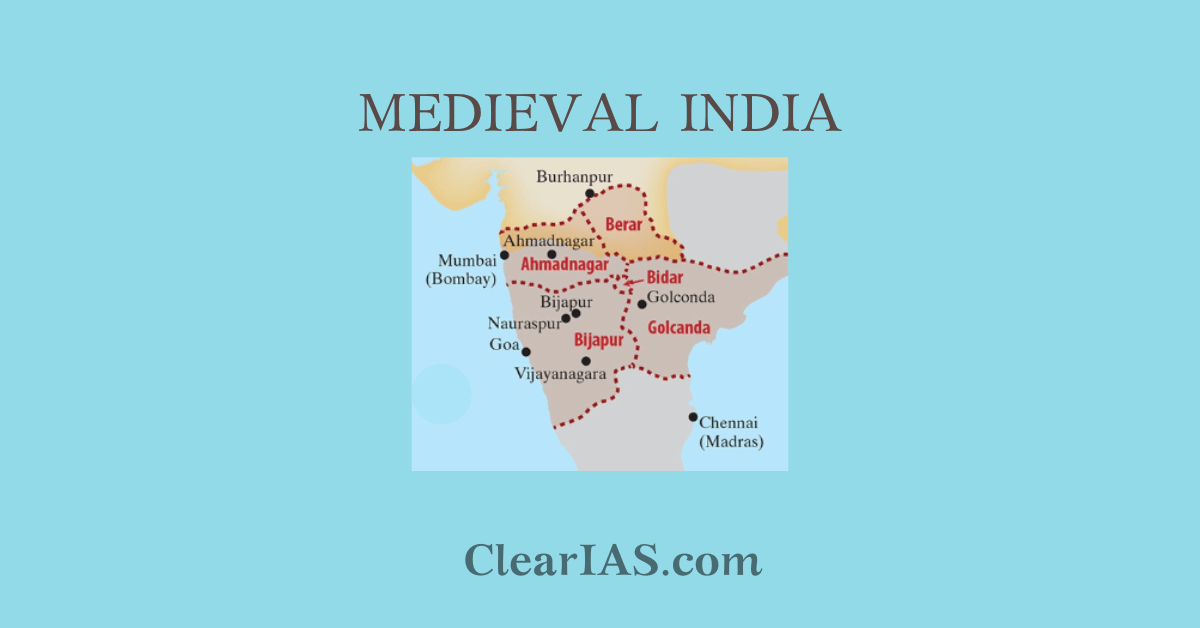 The Deccan Sultanates were five states that became independent after the break up of the Bahmani Sultanate. Read here to know more about them.

The Bahmani Sultanate started declining in the 1500s and fully declined after 1518 when Krishnadevaraya of the Vijayanagara Empire defeated the last remnant of Bahmani power.

The five states which were collectively called the Deccan Sultanates were: 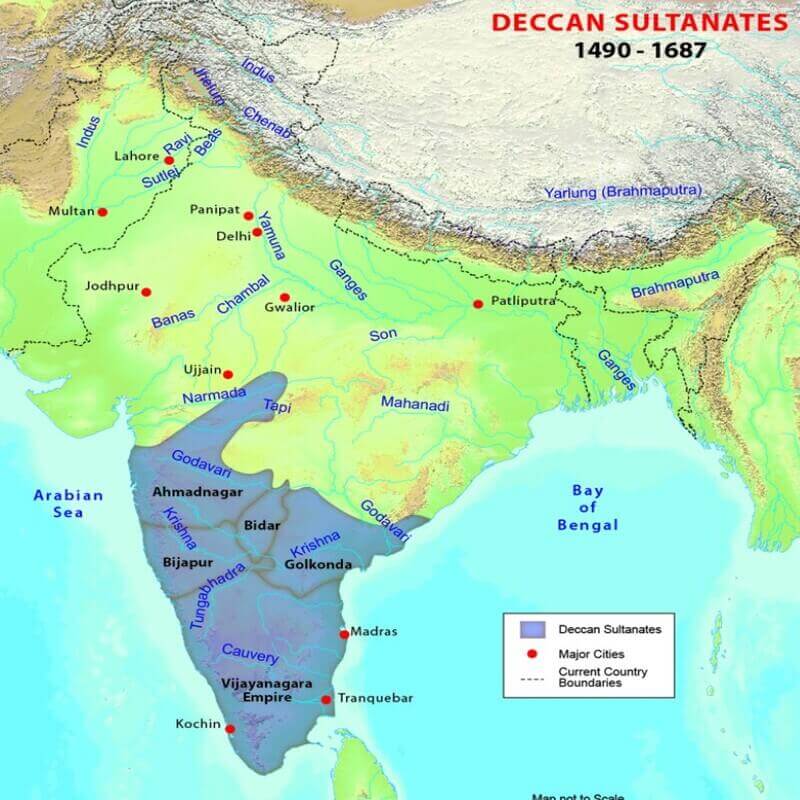 Although the founders of the five sultanates were all Muslims, they came from a variety of backgrounds and were frequently originally non-Muslim. For example:

The states generally fought with each other but they allied against common enemies. The confederation of the Deccan Sultanates defeated the Vijayanagara kingdom in the 1565 battle of talikota.

The Adil Shahi dynasty controlled the Bijapur Sultanate in southwest India from 1490 to 1686. It lies straddling the Western Ghats range in southern Maharashtra and northern Karnataka.

It was founded by Yusuf Adil Shah in 1490. After the battle of talikota, Bijapur seized the Raichur doab and later annexed Bidar in 1619.

Later in the 17th century, under Shivaji’s leadership, the Marathas successfully seized control of the sultanate’s capital, Bijapur, as well as several other key locations.

With the fall of Bijapur in 1686, Aurangzeb overthrew the ailing sultanate, ending the dynasty.

Malik Ahmed Shah Bahri founded the Ahmednagar Sultanate on May 28, 1490, after defeating the Bahmani Army under Jahangir Khan, also known as the Nizam Shahi dynasty.

In the northwest corner of the Deccan plateau, between the sultanates of Gujarat and Bijapur, lay the domain of the Ahmednagar Sultanate.

The Nizam Shahi dynasty’s initial capital was Junnar, but Bahri later lay the cornerstone for the new city, Ahmednagar, in the year 1494.

Chand Bibi defended the Nizam Shahi dynasty against the Mughal attack in 1596. After Chand Bibi died in 1599, the Mughal invasion was again successfully repelled.

Murtaza Shah II was proclaimed sultan in the year 1600, and afterward, Khadki became the dynasty’s new capital. In 1636, Aurangzeb, the Mughal viceroy of Deccan, eventually overthrew the Ahmadnagar sultanate.

The sultanate was founded in 1490 by Fethullah Imad-ul-Mulk who was born a Kannadiga Hindu. He was kidnapped by Bahmani soldiers as a young boy and converted to Islam.

He was the governor of Berar when the Bahmani sultanate fell; he declared independence and founded the Imad Shahi dynasty. Gavilgad and Narnala were also fortified by him, and Achalpur (Ellichpur) was designated as the nation’s capital.

Ahmednagar consistently attacked Berar and finally annexed it in 1574.

In the early 16th century, Sultan Quli Qutb-ul-Mulk migrated to Delhi from Persia with a few of his family members and friends. Later, he moved south to the Deccan and worked for Mohammed Shah I of Bahman.

After the Bahmani sultanate fell apart in 1518, Quli Qutb-ul-Mulk seized Golconda and was appointed the region’s ruler of Telangana. He soon proclaimed his independence and assumed the name Qutb Shah hence founding the Qutb Shahi dynasty.

The Golconda sultanate existed for 171 years before Aurangzeb annexed it in 1687.

It was founded by Qasim Barid I in 1528 and was the smallest of the Deccan sultanates.

Ali Barid Shah I, the first Bidar ruler to use the regal title of Shah, succeeded Amir Barid in 1542. In1565, Ali Barid participated in the Battle of Talikota with the other Deccan sultans against the Vijayanagar Empire.

In 1609, Amir Barid III became the Shah and fought against the Mughals led by Malik Amber in 1616.

He was overthrown by Ibrahim Adil Shah II, the king of Bijapur, in 1619, and Bijapur Sultanate incorporated Bidar.

Cultural significance of the Deccan Sultanates

The Deccan sultanates’ leaders contributed to literature, art, architecture, and music in a variety of ways.