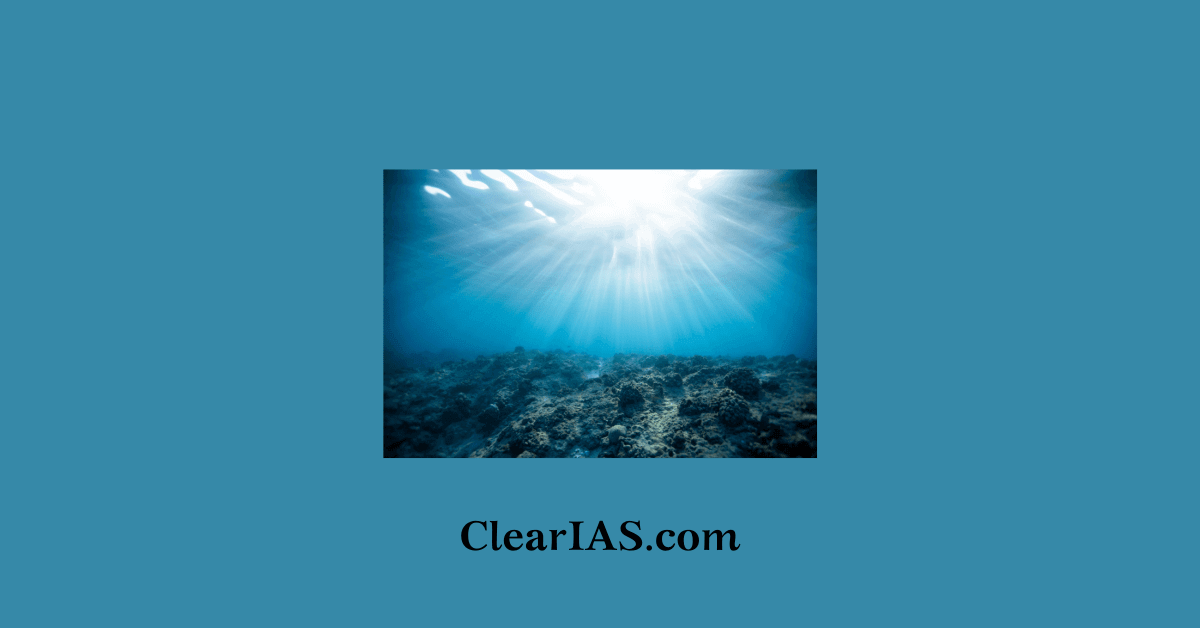 What are Ocean Water Circulation and deep ocean/water circulation? Check all the information in detail here.

Deep Water Circulation is also called ‘thermohaline’ circulation because of the role of heating, cooling, freshening, and salification in producing regional density differences within the ocean.

The thermohaline circulation, for the most part, is an ‘overturning’ circulation in which warm water flows poleward near the surface and is subsequently converted into cold, dense water that sinks and flows equatorward in the interior.

Where does the Deep Ocean Circulation Occur?

Deep Ocean Circulation can only be formed in extremely cold regions where the air temperature is low enough to make the surface water exceedingly cold, highly salty, and denser than the water beneath it.

Deep currents hence generally form in higher latitude areas of the Earth, such as the North Atlantic Deep Water and Antarctic Bottom Water, and they move relatively slowly toward the equator from these icy poleward regions.

Heat Distribution: It transports heat poleward into high latitudes. The thermohaline circulation is thought to be vulnerable to the warming and freshening of the Earth’s polar regions.

Maintaining Carbon Dioxide Levels: It plays a crucial part in regulating the amount of carbon dioxide in the atmosphere by helping in the transportation of carbon from the surface to the deep ocean, where it can be stored for a long time.

Nutrition Distribution: The upwelling branch of the thermohaline circulation is important for the ocean’s biota as it brings nutrient-rich deep water up to the surface.

Ocean Currents: They are in charge of shaping the global oceans’ circulation patterns as well as the ocean currents themselves. The marine ecosystem, weather patterns, and coastal regions are all impacted by these currents.

Ice: The distribution of heat to the polar regions is largely dependent on thermohaline circulation. It affects the rate of sea ice formation close to the polar regions, which has an effect on other components of the climate system (such as the albedo).

Wind: Wind currents are the main force behind the movement of the ocean’s surface layer. When surface water sinks into the deep ocean, the deep water is forced to move horizontally until it can find a region on the globe where it can rise back to the surface and complete its circulation loop.

Great Salinity Anomaly: When sea ice moves through the Fram Strait into the North Atlantic, it melts and leaves a layer of fresh water on the ocean’s surface. Since it is less dense than saline water, this freshwater tends to remain at the surface of the ocean. This lower density deters the normal process of sinking at high latitudes that supports thermohaline circulation, which makes it more difficult for the northern movement of warm water from the equator.

There are no significant deep-water formations in the Indian Ocean on its own. It only serves as a host for Atlantic and Antarctic Bottom Water (AABW) and Northern Component Water (NCW).

Moreover, the northern parts of the Indian Ocean are located at one of the terminal ends of the Global Overturning Circulation (GOC), far away from the deep-water formation regions and oceanic seaways.

Few studies have been conducted in the Indian Ocean to reconstruct past deep water circulations based on iron-manganese crust records and the authigenic neodymium isotope composition of sediment cores.

However, authigenic neodymium isotope records are only accessible from the Bay of Bengal region, and iron-manganese crusts are found at greater depths and are only bathed by Atlantic and Antarctic Bottom Water (AABW), making it suitable only for the reconstruction of the history of AABW.

However, they too cannot help as the Himalayan rivers that flow into the Bay also carry a substantial amount of Neodymium particulates.

A recent study named Nature Communications, made by a team of researchers from the Goa-based National Centre for Polar and Ocean Research and the School of Earth, Ocean and Atmospheric Sciences at Goa University brings light on the issue.

Our discovery suggests a widespread impact of the late Miocene Central American Seaway closure on the evolution of ocean deep water circulation and validates the so-called Panama Closure Hypothesis.

Fishermen, traders, and navies have all shown a practical interest in the ocean’s circulation. Curiosity about currents below the ocean’s surface led to more in-depth descriptions of the ocean as a three-dimensional fluid as our understanding of ocean currents and our ability to see it below the surface increased.

Along with it is important to increase the capacity to study and predict it with ever-improved computer resolution and power.